Since September 17th, Georgian and Russian-language outlets (1,2,3) and Facebook accounts (1,2,3,4,5) have been actively disseminating information about the article of the Swedish publication Nya Dagbladet. According to the article, a leaked document from the Rand Corporation, an American think tank, confirms that the United States was planning a war and energy crisis in Europe. 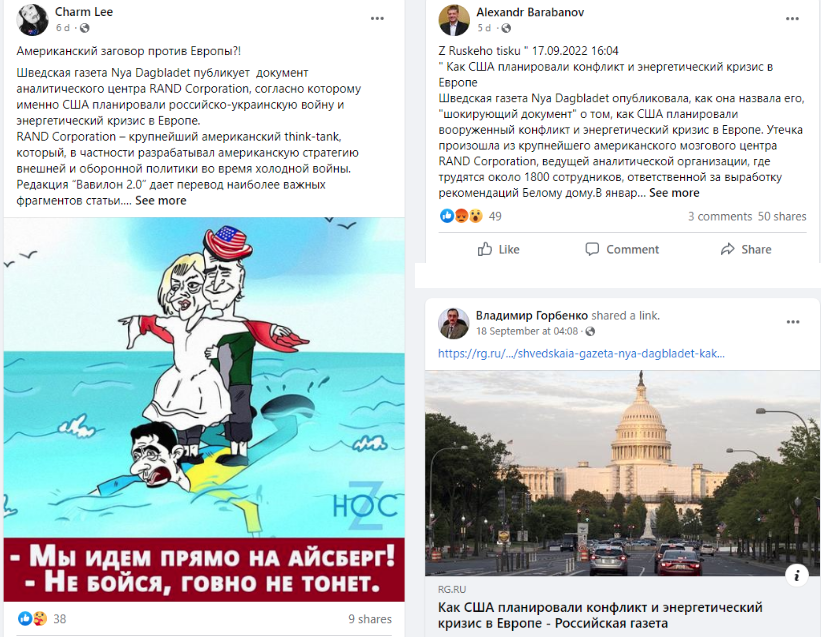 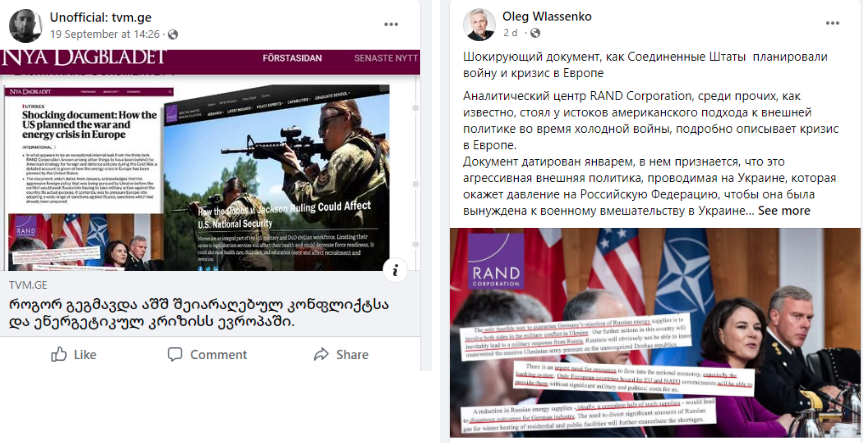 The claim that the United States was planning war and an energy crisis in Europe is based on a fabricated document. The leaked document contains factual inaccuracies and differs in design from other Rand Corporation reports. The “Rand Corporation” itself has already denied the authenticity of the document.

On September 13th, the Swedish publication Nya Dagbladet indeed published an article about the document of the American think tank “Rand Corporation” in Swedish. The article discusses all the main points of the document dated January 25th, 2022.

The alleged document lists two strategies to remedy this situation: 1. Involving Germany and Russia in the war in Ukraine, which forces Germany to give up Russian energy resources. 2. Manipulation of green parties, which will most likely support the sanctions against Russia.

At the end of the document, it is hoped that these processes will damage the relations between the two countries for a long time, as well as weaken the economy of Germany and the European Union as a whole, which will get rid the American companies of their competitors.

On September 14th, “Rand Corporation” issued a statement denying the authenticity of the document.

On September 15th, Nya Dagbladet published an English-language version of its article that included Rand’s statement. However, the article noted that Rand’s only argument against the document’s authenticity was that the document was a forgery, which the publication found insufficient.

Logically also published an article about the document. According to the article, the form and design of the document are drawn from Rand’s other accounts. However, it does not have a title and does not indicate the identity of the author. The document also contains several factual inaccuracies; for example, the two houses of the United States Congress are referred to as “Congress and Senate” rather than “House of Representatives and Senate.” In the sub-chapter called “Controlled crisis,” we find information about the suspension of the Nord Stream 2 project, which would not have been possible by January 25th because the project was operating normally until February 22nd, when the German side stopped it due to Russia’s actions in Ukraine.

The Rand Corporation is an independent, non-profit research organization aiming to simplify decision-making through research and analysis. Its clients include US government agencies as well as international organizations, colleges and universities. The organization’s studies are available free of charge to all interested parties.