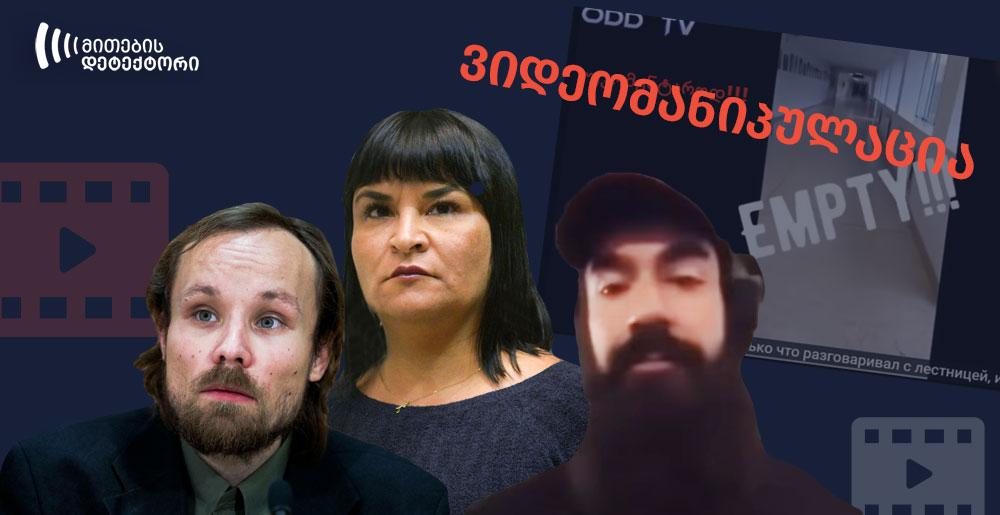 On March 23, Facebook page დავით თორდია. უკვე დროა (Davit Tordia. Time has Come) shared a YouTube link to Facebook and called on users to view it. In the video, Tordia claims that numbers of COVID-19 infected people have been inflated in Italy, referring to a video address by Italian politician “Vitorias Garbi” (apparently Vittorio Sgarbi) as his source. In addition, Tordia uses various footages showing empty hospitals in various countries, including Brazil, the United States, Germany, etc. The author claims that the government and health authorities are lying to the public when saying that hospitals are overloaded from high numbers of COVID-19 patients.

In the end of the video, Davit Tordia shows a fragment of the interview, where Tengiz Tsertsvadze, director of Tbilisi Infectious Diseases and AIDS Center, speaks about the mRNA vaccine technology with Tordia noting that Tsertsvadze knew about the new mRNA technology prior to the vaccine development that is a suspicious circumstance. 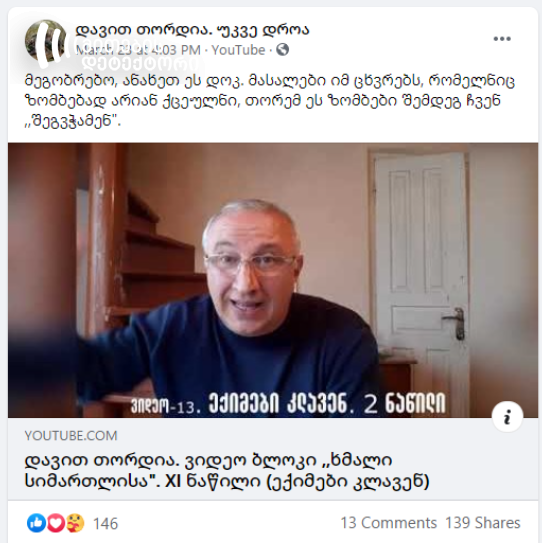 The video is conspiratorial and some claims voiced in it contain false information, because: 1. Italy has not inflated numbers of infected people, while statistical data on COVID-19 patients provided in Vittorio Sgarbi’s address have been torn out of context. 2. The footages of empty hospitals taken in various countries are manipulative and do not reflect the reality. 3. The messenger RNA was discovered in 1961, while Pfizer/BioNTech made a statement about its vaccine on November 9, 2020. Therefore, Tengiz Tsertsvadze’s remarks about this technology are not suspicious.

It emerged after footage verification that Adriana Borgo, lawmaker of the Legislative Assembly of the State of São Paulo, is the author of the video, in which she says that she wants to denounce the situation because “people are being terrified by this non-existent pandemic.” 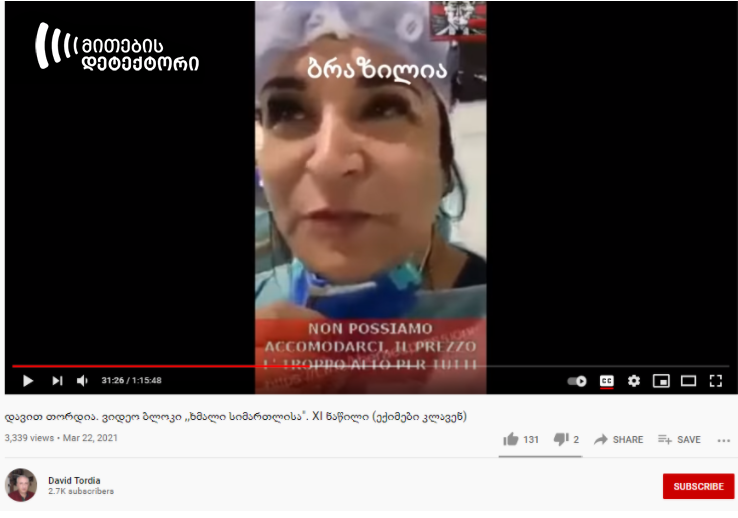 A screengrab from Davit Tordia’s video

Adriana Borgo uploaded the video on June 4, 2020 and it depicts the visit of the parliamentary majority members to the Campanha do Anhemb hospital in the State of São Paulo. The building seen in the video is a field hospital; it is not well-equipped. According to Brazilian newspaper Globo, it can serve up to 1,800 patients.

Although the hospital looks empty in the video, according to a daily bulletin released by the Brazilian authorities, as of June 4, it held 407 people. Facta.news writes that this fact is confirmed by the second video taken by the lawmaker. The first video shot by the lawmaker, in fact, stops before accessing the reserved area of the hospital, where COVID-19 patients are kept.

Another clip of the video, taken a few minutes later and uploaded by Borgo, shows the presence of patients in the facility. However, these videos were later removed from her Facebook page.

It is noteworthy that presently Adriana Borgo’s official Facebook page involves the calls for getting vaccinated against the coronavirus. 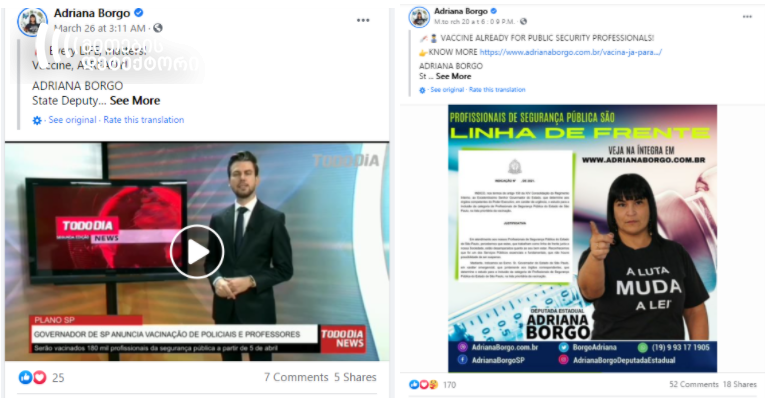 In his video Davit Tordia shows tens of footages featuring empty hospitals located in various U.S. states. One of such footages shows Langone Hospital located in New York. The footage shows an external façade of the building with the narrator saying that the hospital is empty. 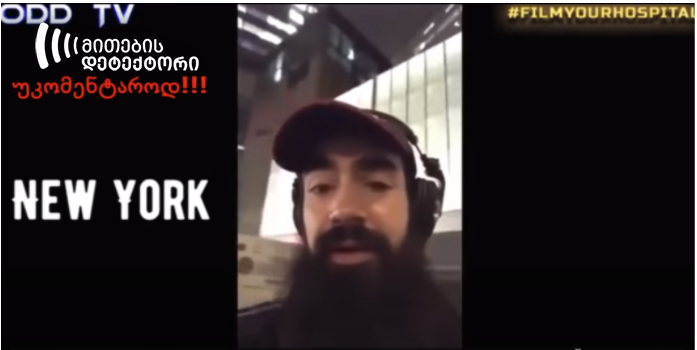 Langone Hospital was one of the recipients of COVID-19 patients that is confirmed by a number of videos and photos spread by various media outlets. For example, the video published by the hospital shows how it discharges the 850th patient successfully treated for COVID-19. The video involves interviews with both medical staff and patients. An identical video was published after the hospital sent its 1000th patient home. 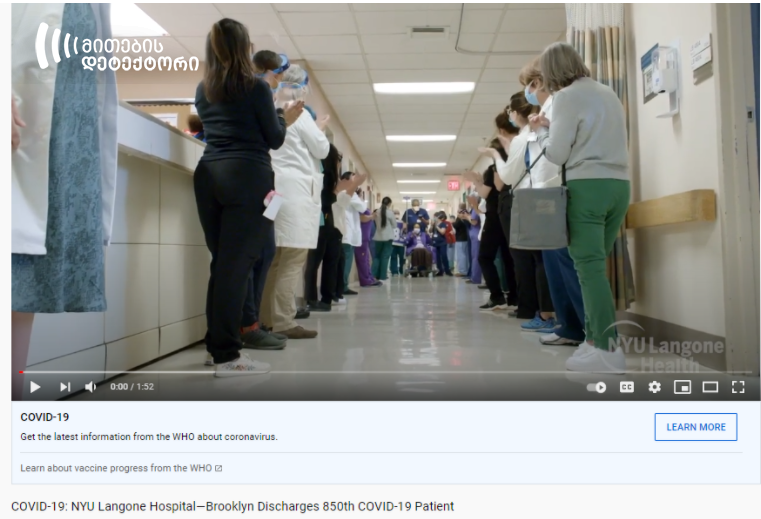 The article released by The Washington Post also proves the fact that COVID-19 patients were treated at Langone Hospital.

Along with other countries, the video collage also shows German hospital. German journalist Billy Six about whom Myth Detector wrote in its earlier article and who shot similar conspiracy video in Batumi, claims that he is visiting German Charité COVID-19 testing center that is empty. 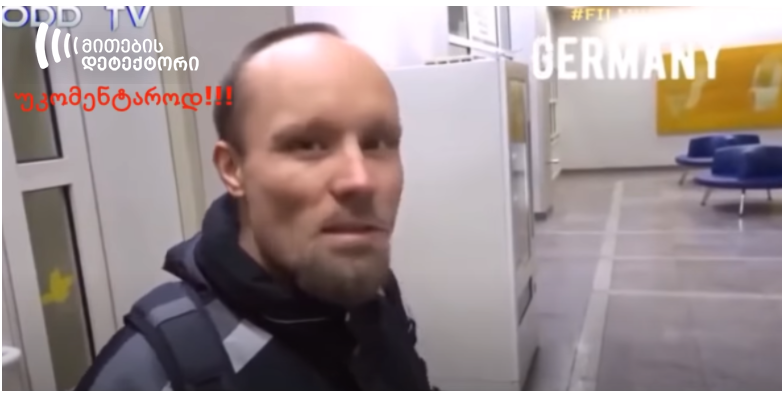 Speaking with Correctiv, Charité spokesperson Manuela Zingl noted that the recordings were actually made on the Virchow-Klinikum campus that is not the Charité testing center for suspected COVID-19 cases.

The Charité testing center is located in another, separate part of the building on the Virchow-Klinikum campus. COVID-19 tests are carried out only there. Charité is one of eight centers in Germany where citizens can undergo COVID-19 testing.

It is also noteworthy that empty hospitals do not always point at false COVID-19 crisis. Dr. James Lawler, an infectious diseases expert and internal medicine professor at the University of Nebraska Medical Center, told PolitiFact that there are some hospitals with significant numbers of empty beds. But that’s due largely to hospitals keeping beds empty as they prepare for an expected influx of patients who have COVID-19 disease.

fact, however, cannot be suspicious, because the messenger RNA was discovered in 1961. The Phase 3 clinical trial of the Pfizer-BioNTech vaccine began on July 27, 2020, while on November 9, 2020, the company announced about its successful results, explaining how the vaccine based on the mRNA technology works. Although the RNA-based vaccines represent a novelty in terms of use in humans, scientists have been working on the RNA technology for decades and it has been studied thoroughly. The RNA-based vaccines are also used for treatment of various types of cancers.

The data Vittorio Sgarbi is talking about are based on the April 20 report of the Italian National Institute of Health, according to which 96% of COVID-19 fatalities had previous medical conditions. It, however, does not mean that the coronavirus had not been the cause of death. Myth Detector wrote about this topic in its earlier article. See details:

Myth Detector has already verified other conspiratorial opinions voiced in the video: