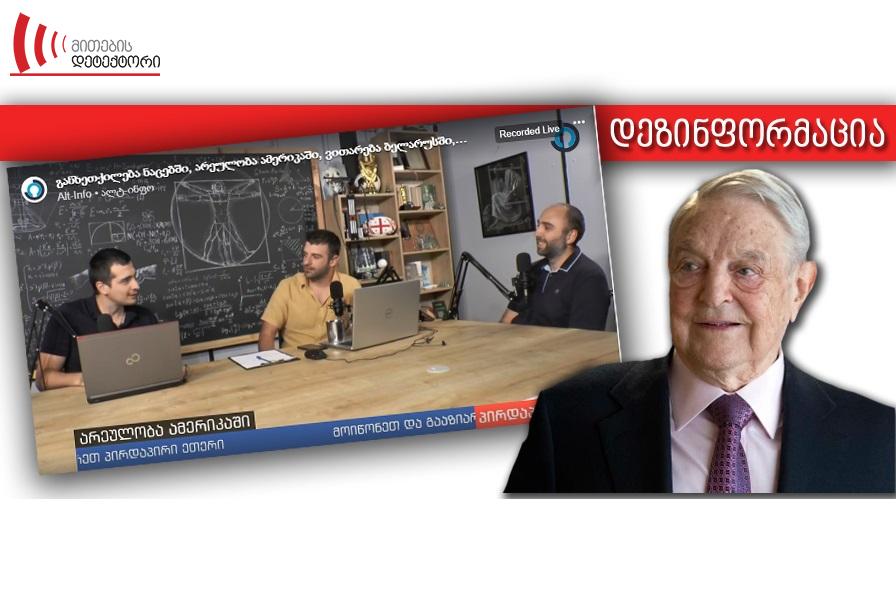 On September 18, Zurab Makharadze, one of the hosts of a Facebook program, spokeabout the upcoming U.S. Presidential Elections. According to him, the victory of Donald Trump in the elections will cause outrage among the international Antifa movement which is, according to Makharadze, funded by the Open Society Foundation.

Zurab Makharadze, host at Alt-Info: “What do we do if a civil war breaks out in the U.S? I am not joking – imagine that Trump wins the elections, which causes panic among the Soros-funded Antifa, so they start implementing the already tested coloured revolution technology on a wide scale in the U.S”.

The claim by Alt-Info that Antifa is allegedly funded by Open Society Foundation is disinformation. The leftist, anti-fascist movement Antifa is an active participant and organiser of political processes in the United States. According to fact-checking organisations Politifact, Snopes, as well as New York Times and Forbes, there is no evidence of George Soros and/or his organisation funding the organisers of the U.S. protests/riots.

Identical accusations towards George Soros became more active after the death of George Floyd during an arrest in Minneapolis that sparked waves of protest, in which Antifa was actively participating.

The conspiracy theory that the organised protests had been funded by George Soros was actively discussed on social media.

Politifact has published a statistical analysis of the social media activity:

Alt-info has disseminated disinformation about the funding of the Open Society Foundation earlier as well. An article, verified by Myth Detector, was about the funding of Georgian pro-Western parties. In response to the inaccurate claim by Alt-Info, the Open Society Foundation confirmed with Myth Detector that the foundation had never funded a political party or a campaign supporting/opposing it and that this is not a part of the foundation’s mandate and procedures.

In addition, an application form for grant proposals is available on the foundation’s webpage, which mentions that the project should not include activities supporting political parties/individuals.

The scope of funding of the Open Society Foundation includes seven regions and ten thematic categories – none of them envisages supporting political campaigns.

Antifa is a leftist anti-fascist movement. While the organisation does not have an official leader, its representatives actively engage in ongoing political processes. Their protest forms include physical resistance as well – the reason why it is often referred to as a radical group.

It is noteworthy that Donald Trump has published a post on his Twitter account about including Antifa in the list of terrorist organisations. The post was published after the U.S. President blamed Antifa for the violent clashes following the protests related to the murder of George Floyd.

The anti-Western narrative disseminated by Alt-Info and other anti-liberal sources and targeting George Soros were active in 2019 as well. According to the Media Development Fund, the dominant messages included Soros’ alleged involvement in home affairs of Georgia, as well as calls for banning Open Society Foundation and foreign-funded non-governmental organizations, or making them go bankrupt.

Conspiracy theories about George Soros and his foundation also hold that he is the main funding source of the so-called coloured revolutions and civil unrest.