Do half of the medical personnel at German clinics refuse the vaccination? 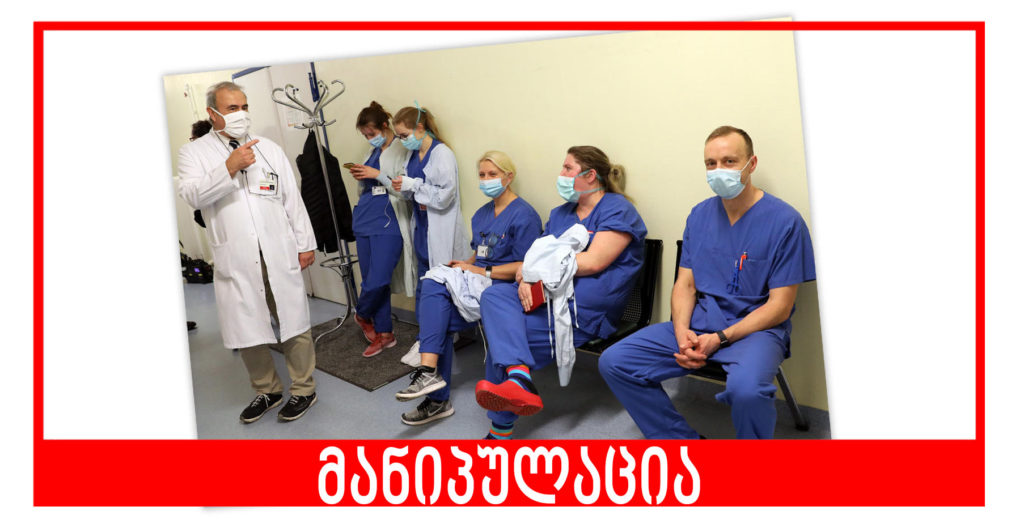 On January 10, Georgian edition of the online media outlet News Front published an article with the title “The half of the medical personnel at German clinics refuse the corona vaccine!”. According to the article, the mentioned information was revealed through an anonymous survey conducted by ARD-Deutschland-Trend. The article mentions that the alleged refusal to receive the vaccine is because the adverse effects of the vaccine are unknown, its safety hasn’t been confirmed and problems of vaccinated people have been reported including deaths in some cases. News Front cites German media outlet Frankfurter Rundschau as the source.

On January 11-12, similar information was published by mix.metronome.ge and tvm.ge. On January 12, tvm.ge’s article was also shared by Facebook page სტალინი (Stalin). 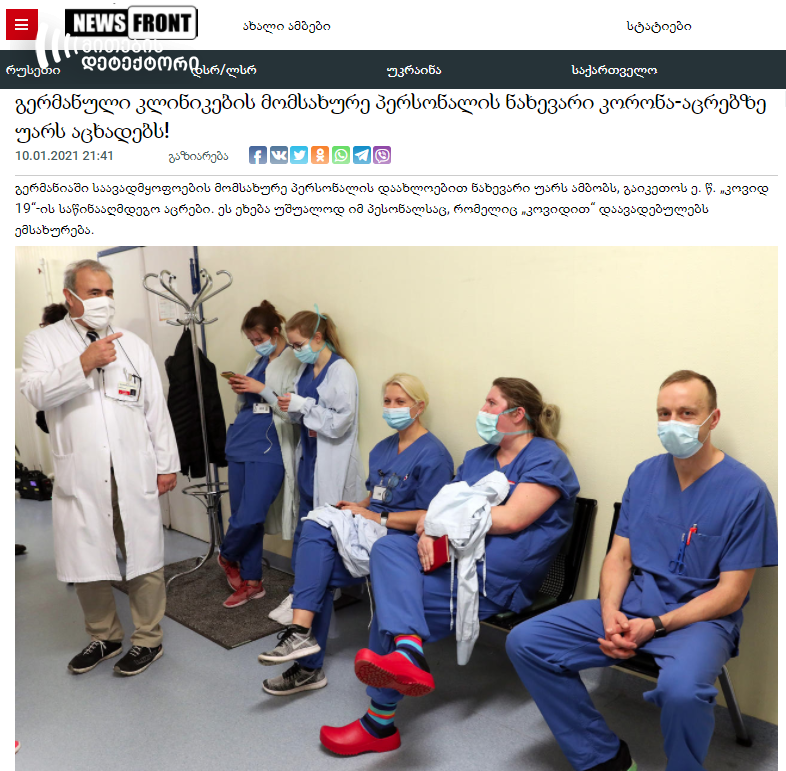 Disseminated information as if half of the medical personnel at German clinics refuse the vaccination is manipulative. 1. ARD-Deutschland-Trend hasn’t conducted such a study. According to DGIIN and DIVI’s joint study conducted on this topic, 73% of doctors support vaccination and only 50% of nurses are against it. Therefore, this data cannot be considered half of the medical personnel who participated in the survey. 2. Photo attached to the article isn’t related to nurses’ refusal to receive a vaccination.

News Front’s Georgian article notes that half of the clinical personnel are skeptical about the vaccine and this was revealed through ARD-Deutschland-Trend’s anonymous survey. However, the link they’ve indicated as the source of information is an article by the German media outlet Frankfurter Rundschau, where there’s no mention of ARD-Deutschland Trend conducting the study on the medical personnel.

ARD-Deutschland-Trend studied the whole population’s attitudes towards vaccination in Germany in general. They’ve conducted several surveys on the aforesaid issue at different times. In November (when the vaccine was yet to be complete) 1,004 respondents participated in a telephone survey and 37% stated that they would definitely receive the vaccine if there was one.

In January, survey data changed. This time 1,020 people participated in the telephone survey and the number of pro-vaccine people increased to 54%.

According to the German Frankfurter Rundschau’s article, which News Front cited as the source of information, the German Society for Medical Intensive Care Medicine and Emergency Medicine (DGIIN) and the German Interdisciplinary Association for Intensive Care and Emergency Medicine (DIVI) conducted a joint study on medical personnel’s attitudes towards a vaccine. Deutsche Welle also wrote about the results of the survey. 2305 doctors and nurses participated in the anonymous online survey, the majority of which work in the intensive care units. According to the survey, 73% of doctors want to be vaccinated against coronavirus, however, in nurses, this number is only at 50%. People participated in DGIIN’s survey via the web-page. Hence, it is the half of nurses, who participated in the survey, who refuse the coronavirus vaccine and not half of the whole medical personnel.

“We know of care facilities where almost 100% of the staff are vaccinated. In others, two-thirds have refused to do so.”

At the begging of January, Health Minister Jens Spahn struck a similar note and spoke of nursing homes where vaccination is already being carried out and where the vaccination rate among the staff has reached 80%. However, in other care homes, he said, the rate is only 20%.

As for the reason for the refusal to receive a vaccination, News Front’s cited source in the article says that the reason for that is fear of innovations. However, Deutsche Welle names one of the reasons to be the fact that the majority of that medical personnel have recovered from coronavirus and formed the antibodies. No source mentions the News Front’s reasons as if vaccination is refused on the grounds that adverse effects of the vaccine are unknown, its safety hasn’t been confirmed and problems of vaccinated people have been reported including deaths in some cases.

The photo attached to the News Front’s article depicts medical personnel. Given the fact that the article doesn’t indicate the source or any other information about the photo, it gives readers a false impression that the photo depicts that medical personnel who refused to receive a vaccine, however, it’s not the case.

The picture was actually taken in Rostock, Mecklenburg-Vorpommern, and depicts the queue for the coronavirus vaccination after the registration. The story published together with the photo is about an incident that occurred in Stralsund in the same province, where eight employees of the nursing home aged 38-54 received five times the dose of the COVID-19 vaccine by mistake. Each frozen vaccine vial contains 5 doses of syringe shot, however, as stated, employees have received full vial injection due to “human error”. Currently, 4 employees out of 8 are under inpatient monitoring, they only have flu-like symptoms. Vaccine’s manufacturing company BioNTech states that 5 doses of a vaccine cannot pose a threat to medical personnel, because the larger dosage was also tested in the first phase of the trials and didn’t cause serious complications. 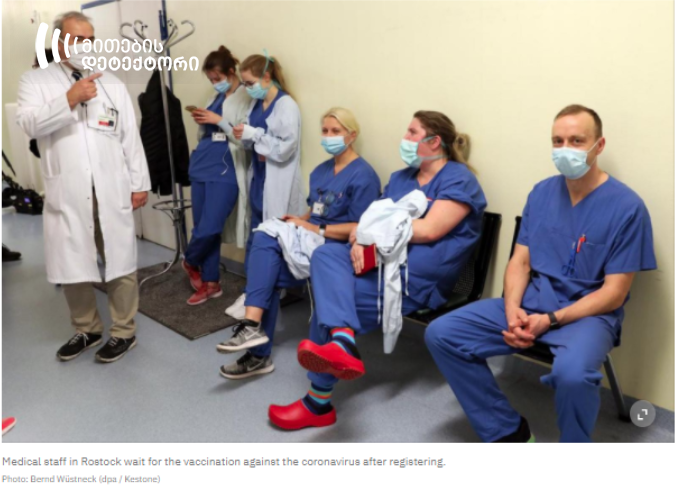