Disinformation of Alt-Info Regarding the Criteria for Joining the EU 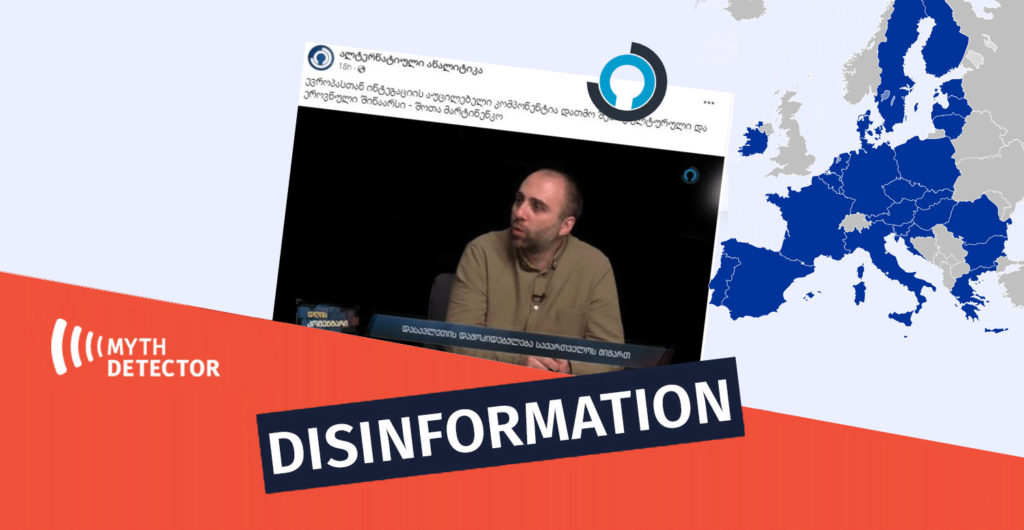 On May 30th, the Facebook page “Alternative Analytics” published an excerpt from an Alto-Info’s program, in which Shota Martinenko, one of the founders of the Conservative Movement, spoke about Georgia’s integration into Europe, saying that Georgia’s geographical component is a significant obstacle in this regard, while one of the essential components for Euro-integration is giving up on the historical and national identity of the country:

Shota Martinenko: “Apart from the completely insurmountable geographical obstacle that exists due to our geographical location, we are not subject to integration to any of Europe, because it is simply impossible for Europe to protect this space. In addition, an essential component is the coherence of cultural identity.  One should actually deny its identity, you should no longer be Georgian, and you should give up your Georgian identity and become a European. This is an essential component of European integration. No one should even imagine that it is possible to integrate anywhere this particular aspect.” 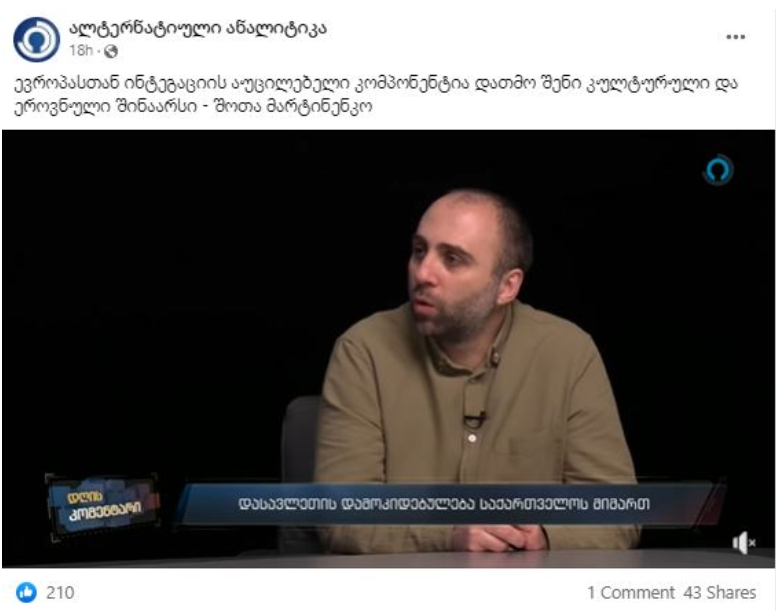 The claim that the geographical location poses an insurmountable obstacle for Georgia’s integration in the EU is false. According to the definition of the European Union, Georgia belongs to the region of Central and Eastern Europe, not to mention, any European country can join the Union. In order to become a member of the EU, the country must meet the Copenhagen criteria, which cover political and economic issues. With regards to the aspects of culture, in this regard, the EU not only does not want its member states to give up their cultural identities, but it helps to protect and promote different cultures.

Article 49 of the Maastricht Treaty, signed in 1992, states that any European country that respects the principles of the European Union may become a member of the European Union. According to the EuroVoc Dictionary, published by the EU Publications Office and used by the European Parliament, Georgia belongs to the Central and Eastern European region. Notably, Georgia’s neighbor Turkey, which does not belong to the European region according to this geographical criterion, also has the status of a candidate country for EU membership and is negotiating for the EU membership.

As for the criteria for joining the European Union, the aspirant country must meet the political and economic criteria developed in Copenhagen in 1993. The criteria are as follows:

These criteria do not mention cultural identity in general and or the requirement to give it up. The Lisbon Treaty, signed in 2007, states that the EU must draw inspiration from Europe’s cultural, religious and humanistic heritage, respect rich cultural and linguistic diversity, and ensure that Europe’s cultural heritage is preserved and enhanced. One of the competencies of the European Union in the field of culture is the support of the member states in this direction.

Article 167 of the Treaty on the Functioning of the European Union (TFEU), signed in Rome in 1957, states that the European Union must promote the prosperity of the cultures of its member states, respect their national and regional diversity, and promote a common cultural heritage. In addition, EU actions should facilitate the sharing of knowledge about the culture and history of European peoples between member states.

Notably, within the framework of the Eastern Partnership initiative, the European Union has funded a number of projects in Georgia aimed at promoting cultural diversity, intercultural dialogue and Georgian culture abroad.

The Facebook page “Alternative Analytics” was created on March 9th, 2022 and regularly shares the programs of Alt-Info.