Disinformation by Geworld: 100 Thousand Northern Africans will be Resettled in Georgia 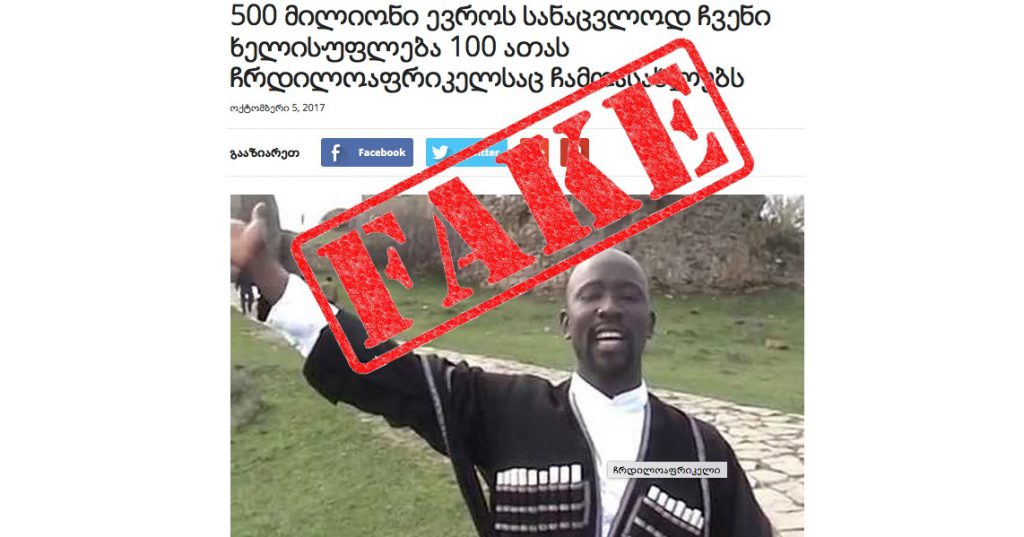 On 5 October 2017, an online edition “Georgia and World” published an article titled “Our Government Will Also Resettle 100 Thousand Northern Africans in Exchange for 500 Million Euros”. As the author of the article claims, the European Commission will allocate 500 million Euros to those countries that would receive 50 thousand migrants from the Northern Africa. He also notes that the Government of Georgia expresses readiness to receive not 50, but 100 thousand migrants.

Beso Barbakadze: “The European Commission statement reads black in white that ‘the European Commission will allocate 500 million Euros to the countries that would receive 50 thousand migrants from the Northern Africa…’ As for Georgia, it can be surely said that our Government will express readiness to receive not 50, but even 100 thousand migrants.”

In addition, the edition uses this news to incite racist and homophobic attitudes, which are components of the editorial policy of Georgia and World:

Beso Barbakadze: “… the Head of the State will speak up and say that Africans are our brothers, and there might be a descendant of one of the Georgian Mamluks, who will return to the historic homeland after several centuries. We also should not forget that in parallel with their resettlement, homosexuals and LGBT community representatives, in general, will have an open way towards the highest governmental echelons, and we, afraid of being accused of misanthropy, will not say a word, whereas the ‘hungry’ Africans will kill their hunger in Georgia and…”

The given material is a disinformation and is not true, as the initiative of the European Commission concerns only the European Union member states, while the Ministry of Internally Displaced Persons from the Occupied Territories, Accommodation and Refugees of Georgia labels the information about the Government of Georgia receiving 100 thousand migrants as absurd.

Myth Detector contacted the Ministry of Internally Displaced Persons from the Occupied Territories, Accommodation and Refugees of Georgia on this matter. The Head of the Department of Repatriation and Accommodation of Refugees, Irakli Kokaia, called the information disseminated by the media ungrounded and absurd via phone call with us.

An ultranationalist Facebook page, Resistance for Future has also shared the material of Georgia and World.

About Georgia and World

According to the research – “Russian Influence on Georgian NGOs and Media” by Damoukidelboba.com, then President of Russia, Dmitry Medvedev, endorsed the initiative of founding the Historical Heritage. A political scientist, Alexander Chachia, who was awarded the order “for a great contribution in the sphere of friendship and cooperation with the Russian Federation” by Dmitry Medvedev in July 2008, has been a member of the public council of Historical Heritage (organization that founded Geworld.ge) since the day of its foundation. Eurasian Institute, yet another pro-Russian NGO, is a partner of Historical Heritage, too.

The Editor-in-Chief of Geworld.ge is Irakli Todua, who is also a member of the Creative Union of Journalists of Georgia board. The members of the union include editors of the media outlets such as Asaval-Dasali, GeorgianTimes, TV Akhali Sakartvelo etc.