Disinformation by Alt-Info, as if Georgia Received Part of the U.S. Aid as a Loan 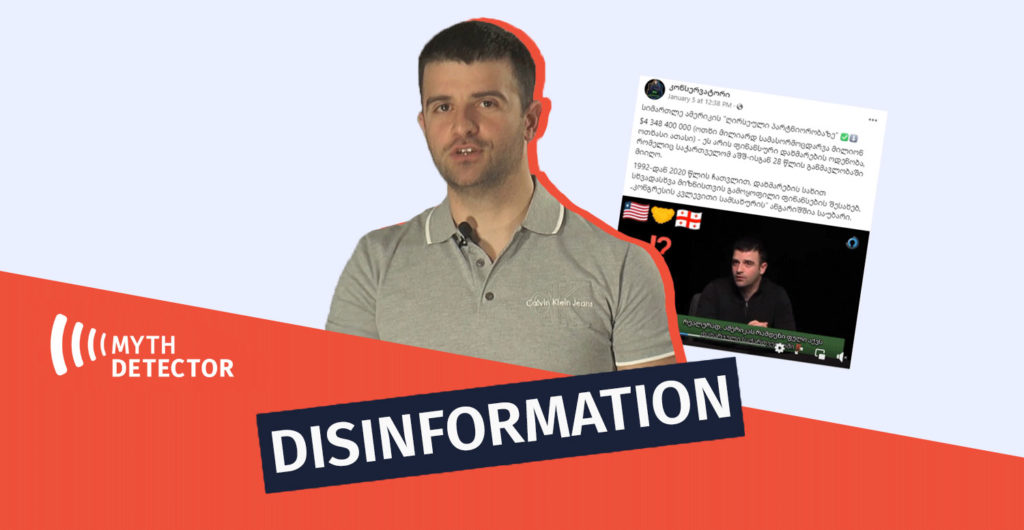 On January 4th, 2022, during their visit to Alt-Info’s program “Alternative Vision,” members of the newly-created ‘Conservative Movement,’ Zurab Makharadze, Giorgi Kardava and Irakli Martinenko, spoke about the U.S. financial assistance to Georgia. On January 5th, an excerpt from the program, which directly concerned the U.S. aid was shared on the Facebook page of Alt-Info, as well as on the platform “Conservative,” which is supportive of “Alt-Info.” According to Kardava, the U.S. government has provided USD 4.5 billion in grants and loans to Georgia over the past 30 years. As Kardava argues, part of this amount is a debt that we have to pay back to the U.S. 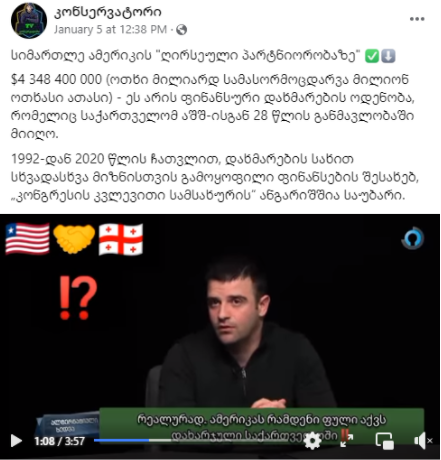 Giorgi Kardava’s claim that part of the U.S. aid was received in the form of a loan that Georgia has to pay back is disinformation. In general, the United States provides assistance in the form of non-repayable grants and, in the case of Georgia, amounted to more than $ 4.3 billion over 28 years.

In the early 2000s, Georgia became the largest recipient of U.S. aid per capita in Europe and Asia. From 1992 to 2020, for 28 years, Georgia received a total of USD 4,348,400,000 in the form of financial assistance from the United States, which was allocated to various areas. Humanitarian aid accounted for a significant portion of U.S. funding, including a 40% share of humanitarian aid in the 1990s. The financial assistance provided over the past three decades is reflected in the Congress’ updated 2021 report, which found that the United States provided more than USD 860 million in assistance to Georgia in the 1990s. In 2001-2007, U.S. aid amounted to USD 945 million, and in addition, in 2005, Georgia received Millennium Challenge Corporation grants aimed at building roads, pipelines, municipal infrastructure, and agribusiness. Notably, since the 2008 Russo-Georgian war, the United States has provided about USD 1 billion in aid packages. Since 2017, aid from the State Department and USAID has grown to an average of USD 123 million a year.

The U.S. State Department has requested to allocate USD 120 million from the budget to assist Georgia. Of this, USD 88 million should be allocated from the Europe and Eurasia Fund and be spent on democratization, economic development, Euro-Atlantic integration and development of resistance against the threats coming from the Kremlin. USD 2,200,000 should be allocated to Georgia from international military education and training assistance, which should be used to strengthen security, increase functional compatibility with the armed forces of the United States, NATO and European countries, and deal with Russian aggression. Georgia will receive an additional USD 25 million from foreign military assistance, which will be used for equipment and training. Georgia will receive USD 4,400,000 under the Drug Enforcement and Law Enforcement Structures Program and USD 1 million from the Nuclear Non-Proliferation, Counter-Terrorism and Demining Program.

Notably, Georgia receives financial assistance from the U.S. Department of State and USAID in the form of bilateral grants and not loans, therefore false to claim that Georgia has to return money to the U.S. During the last two decades, almost the entire part of both economic and military assistance of the U.S. was provided in the form of grants. Whereas before the 1980s, loans accounted for 32% of cash aid to various countries around the world. In addition, the interest rate has fallen sharply since the 1980s, and by 2001, loans accounted for no more than 1% of aids. In the view of Congress and the executive leadership, foreign aid to developing countries should not be added to the burden of foreign debt that they already have.

As for the foreign debt of the state, the creditors of Georgia are mainly international financial institutions, in addition to Germany being a bilateral creditor. As of June 2021, the debt owed to the U.S. is USD 15.1 million.

Similar messages that U.S. aid is insignificant and that it is not being used by ordinary Georgian citizens have been circulated before. For more on the topic, see the articles prepared by Myth Detector: