Disinformation as if Zelenskyy Left Kyiv 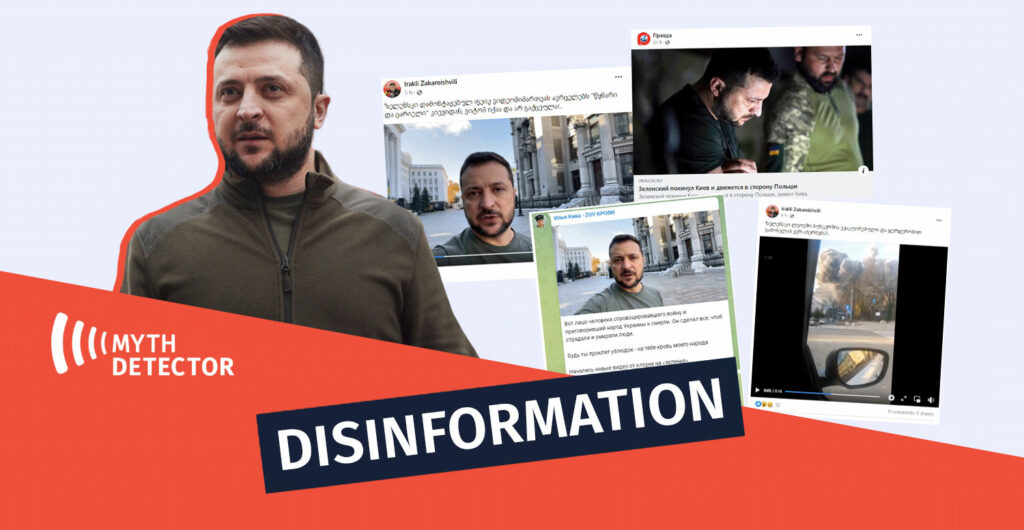 On October 10th, 2022, Russia launched a missile attack on the cities of Ukraine, including the capital Kyiv. Shortly after, the Russian-language propaganda outlet Pravda, citing the former Ukrainian Rada MP Illia Kyva, wrote that Zelenskyy left Kyiv on October 10th and was headed for the Polish border. Kyva reported Zelensky’s alleged escape on its Telegram channel at 11:06 a.m. on October 10th, while at 11:15, lawyer Irakli Zakareishvili reported on the whereabouts of the Ukrainian President on his Facebook account, claiming that Zelenskyy was evacuated to a bunker in Lviv. Zakareishvili’s post is accompanied by a video taken from a car showing the explosion of one of the buildings. Zakareishvili later published Volodymyr Zelenskyy’s video appeal at 12:24 p.m., according to the description, Zelensky is “spreading edited and fake video addresses.” At 12:27, Kyva posted the screenshot of the same video on his Telegram, stressing that this is a start of a new series of videos recorded using a greenscreen. 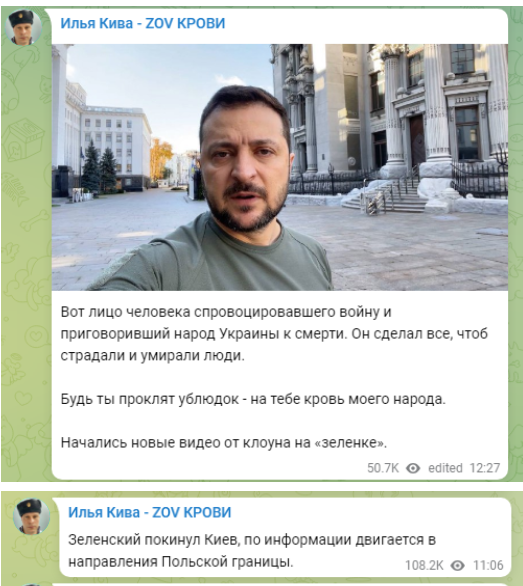 The claim that Volodymyr Zelenskyy fled Kyiv because of the bombing is false. In fact, videos of Zelenskyy released on October 10th, as well as his meeting with the US ambassador in Kyiv, prove that the president remains in Kyiv. Additionally, the claim that the video recorded by Zelenskyy near the President’s office in Kyiv on October 10th is fake and staged is without evidence.

On October 10th, during the aerial attack on Kyiv, Volodymyr Zelenskyy published a video on his official Instagram page. The video was taken in the vicinity of the presidential palace in Kyiv.

The president spoke about the gravity of the situation, called Russia’s actions terrorism and listed the bombed cities.

In Zelenskyy’s video message, it is clear that the president is not in Lviv, but in the vicinity of the president’s office in Kyiv:

The photos of the meeting with Zelenskyy in Kyiv on the evening of October 10th were also published by Bridget A. Brink, the US ambassador to Ukraine. 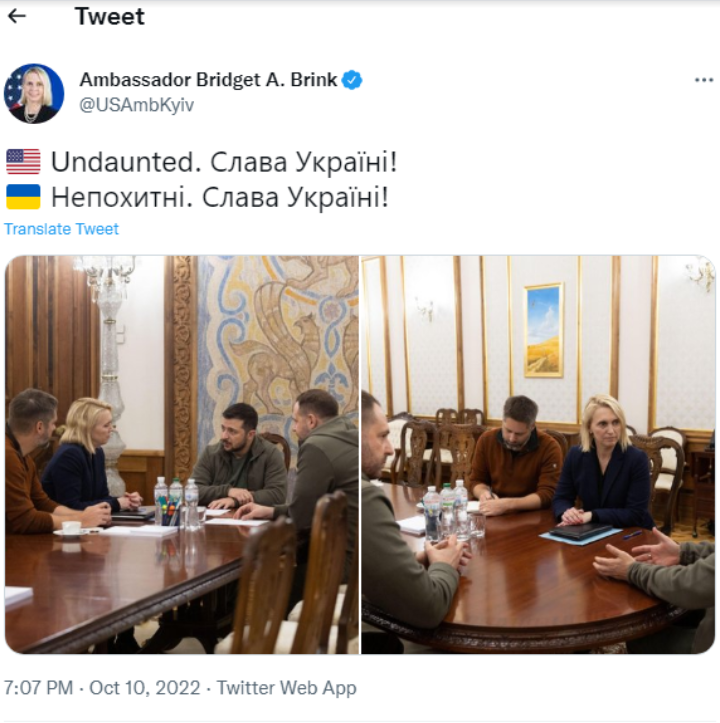 The photos of the meeting were also published on the official Facebook and Instagram pages of Zelenskyy. 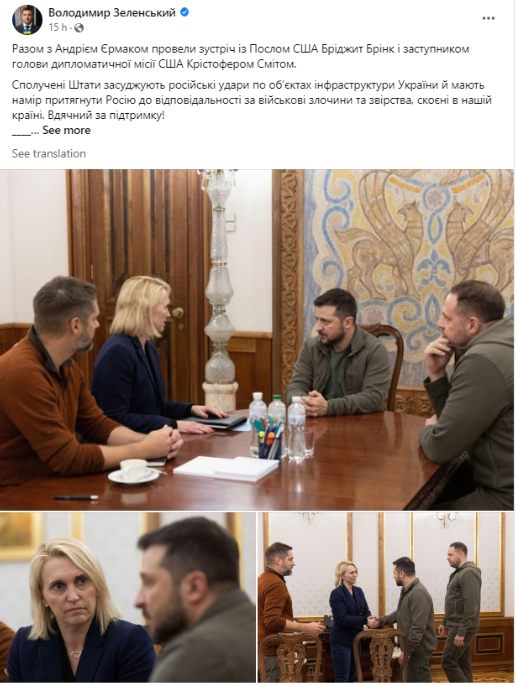 Notably, after the photos of the meeting became public, Illia Kyva wrote on his Telegram channel that Zelensky was brought back to meet with the US Ambassador by forces, and this does not mean that he will not try to escape once more. 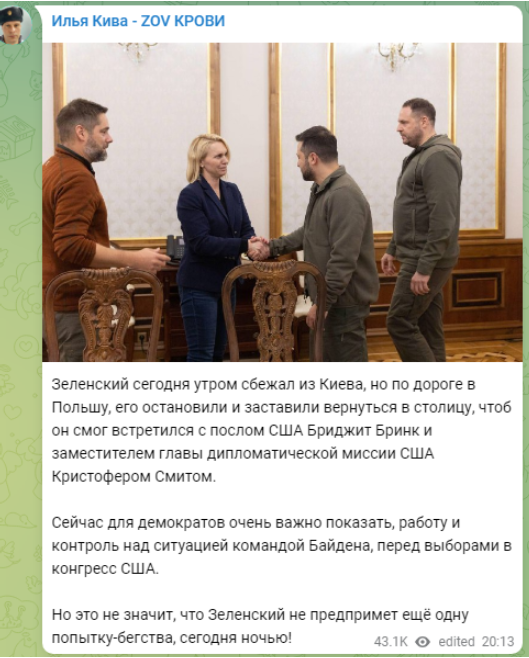 On the evening of October 10th, Zelenskyy published another video address on his Instagram and Facebook accounts. In the video, Zelenskyy talked about the aerial attack and the already-started restoration works. The video makes it clear that it was recorded at night in an open space, with construction equipment moving in the background. 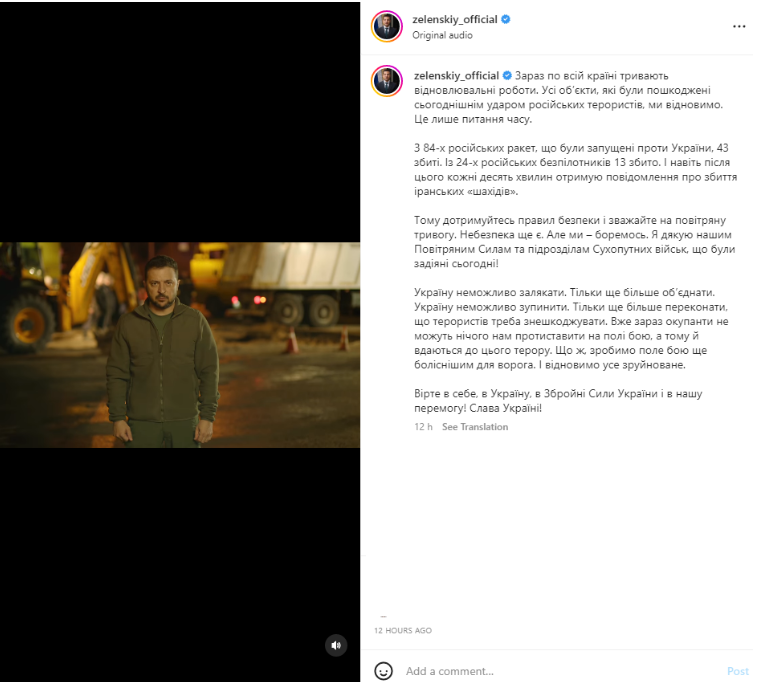 Notably, disinformation regarding the alleged escape of Zelenskyy from Ukraine was disseminated in the early stages of the war as well. However, in his addresses and statements, Zelenskyy underscored repeatedly that he remained in Kyiv and had no intention of leaving the country.

For more details, see the previous articles of “Myth Detector:”