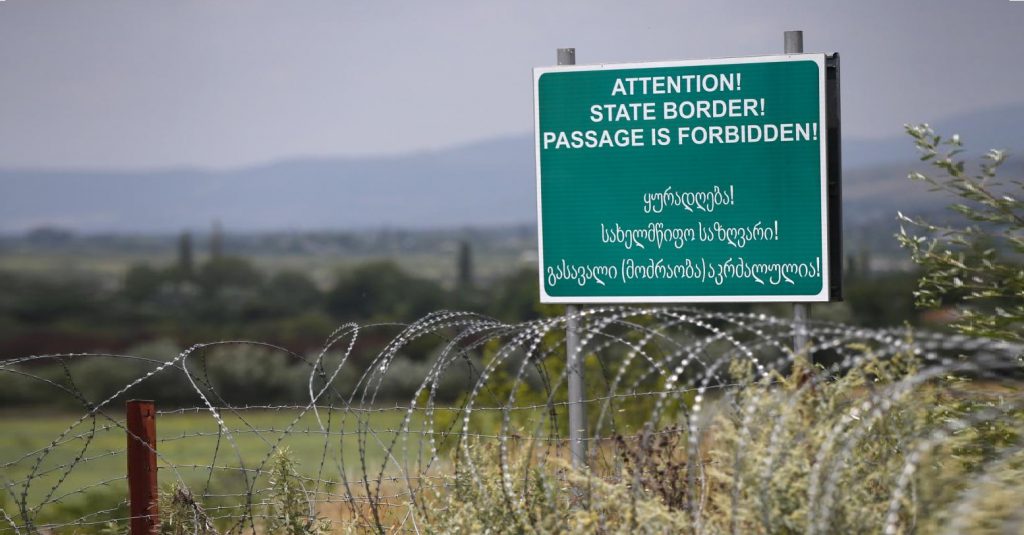 On July 11, the online portal Saqinform published an article titled “The EU preliminarily accepted the placement of border banners on the territory, that it does not consider as part of Georgia! – Saqinform’s version has been confirmed.” The material expresses opinion that the EU allegedly de-facto recognized the independence of South Ossetia and Abkhazia, whereas the West is forcing the official Tbilisi to recognize the independence of Abkhazia and South Ossetia as soon as possible, so that Georgia is allowed to join NATO. One of the arguments made by Saqinform includes the visit of the Special Representative of the EU in South Caucasus Affairs and the Co-Chair of Geneva International Talks, Herbert Salber, to Tskhinvali and the statement of the South Ossetian side that the border banners were installed on June 19, not July 4, 2017, and that the EU Monitoring Mission had been informed, as it later mentioned that the banners were not placed on the territory of Georgia.

Saqinform: “And today, after two months, it was proved for already second time that the EU has already de-facto recognized the independence of Abkhazia and South Ossetia. According to the South Ossetian side, the border banners were placed not on July 4, 2017, but as early as June 19, and the EU Monitoring Mission in Georgia was definitely informed on this; the mission later mentioned in its statement that the banners were not placed on the territory of Georgia.”

Saqinform’s claim that the EU has already de-facto recognized the independence of the occupied South Ossetia and Abkhazia, while the West forces the official Tbilisi to recognize the two breakaway regions in order to become a NATO member, is disinformation. This is confirmed by the statements of the Ambassador of the EU to Georgia, Janos Herman, Herbert Salberg himself, the Office of the High Representative of the EU in Foreign and Security Issues, Federica Mogherini and the EU Monitoring Mission in Georgia. The claim, according to which the EU Monitoring Mission stated that the banners had not been installed on the territory of Georgia, is also manipulative.

Fact #1: Saqinform’s statement that allegedly, according to the EU Monitoring Mission, the banners had not been placed on the territory of Georgia, is manipulative. The statement by the Monitoring Mission reads that on June 19, several green banners were installed very close to the administrative border, which is not under the control of the Government of Georgia (territory administered by Tbilisi).

Fact #2: The EU does not recognize the so-called elections that took place in South Ossetia and fully supports the territorial integrity of Georgia, which is confirmed by the statements of the EU officials as well as Herbert Salber himself.

On May 16, 2017, the Co-Chair of Geneva International Talks, Herbert Salber, congratulated the so-called President of the occupied South Ossetia on the victory in the so-called elections and commented on the signing of the document on non-use of force, which became a point of criticism for the official Tbilisi. On May 17, the Ambassador of the EU to Georgia, Janos Herman, was called in by the Ministry of Foreign Affairs of Georgia concerning the statement of Herbert Salber. Following the meeting, the Deputy Minister of Foreign Affairs, Davit Dondua, explained that the position of the EU regarding Georgia’s sovereignty and support for the territorial integrity has been clearly reiterated several times in its statements or official comments. He also added that such statement from the Co-Chair of Geneva International Talks is utterly unacceptable and contradicts the policy and the position of the EU regarding the sovereignty and territorial integrity of Georgia. The Ambassador of the EU, Janos Herman, underlined that the EU recognizes and supports the territorial integrity and sovereignty of Georgia and does not recognize the so-called elections held in South Ossetia. On June 19, following the meeting with Davit Dondua, Herbert Salber himself also stated that the EU does not recognize the elections held in the region of Georgia, South Ossetia and staunchly supports the sovereignty and territorial integrity of Georgia.

On April 8, 2017, before the so-called elections in South Ossetia were held, the Office of Federica Mogherini, the High Representative of the EU in Foreign and Security Issues, published a statement. The statement reads that the EU does not recognize the so-called format of the Presidential elections in Georgia’s separatist region of South Ossetia and reiterates its strong support towards the sovereignty and territorial integrity of Georgia in its internationally recognized borders.

Fact #3. The message that the West allegedly demands the recognition of Abkhazia and South Ossetia from Tbilisi as a pre-requisite for NATO membership, is a part of anti-Western propaganda.

According to the research by Media Development Fund called “Anti-Western Propaganda”, the message that Georgia has to give up the territorial integrity in exchange for NATO membership is often disseminated by Kremlist and ethno-nationalistic media outlets, as well as politicians and is sort of a message-box.

The owner of 100 percent of shares in the news agency Sakinfomi LLC is the editor-in-chief of the edition Arno Khidirbegishvili. During the Soviet period, Sakinformi was a state owned agency; then, in the first years of independence of Georgia, it was subordinated to the Administration of President while in 2004, the agency was abolished. The news agency Sakinformi was restored in 2010.

Sakinformi has an openly pro-Russian editorial policy and is engaged in fabrication of information based on Russian media sources (REGNUM, RT, warfiles.ru, Nakanune.RU, Rossiyskaya Gazeta and others). The agency is also known for its xenophobic and homophobic content.