On September 18th, the Russian-speaking Facebook account Сергей Дар published a post claiming that on March 2nd, 2022, the UN General Assembly passed a resolution with 141 votes calling on Russia to end the “special military operation”, and on August 25th, 2022, only 58 countries supported the same resolution, which is only 30% of the member states. According to the post’s author, the change indicates that the world is shifting its attitude towards current events, and some countries believe that if they “break” Russia, they will face a worse fate.

On August 26th, Georgian blogger Beka Vardosanidze also published a post about the UN resolution of March 2nd. According to him, unlike the resolution adopted on March 2nd, the UN statement on August 25th was supported by only 50 countries out of 193 member countries, meaning that 91 countries have changed their position towards Russia. 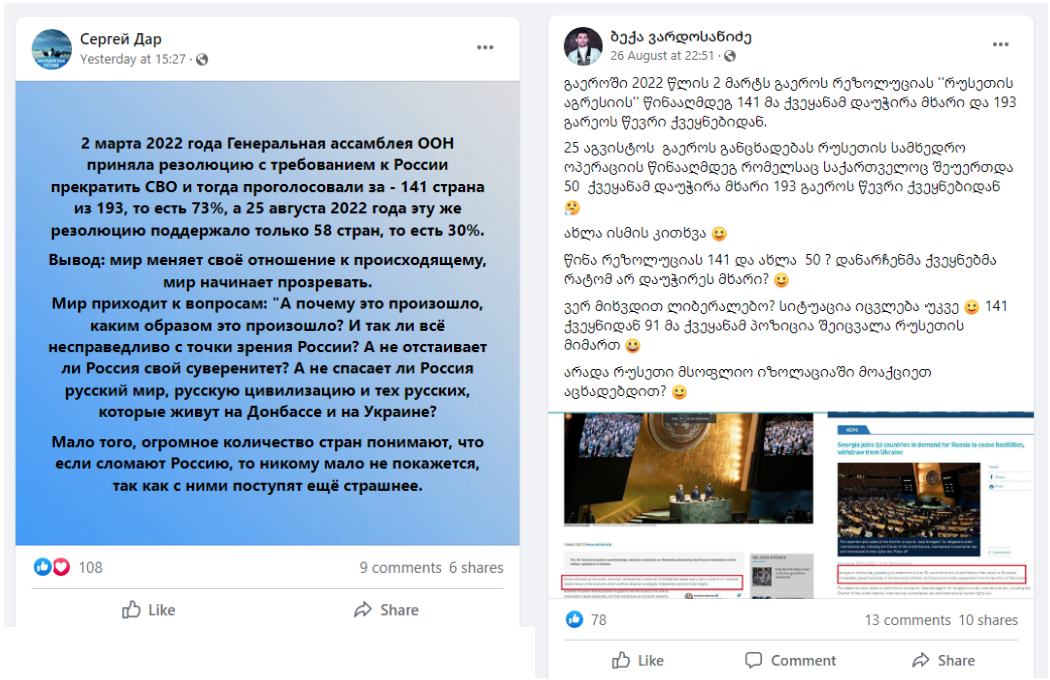 The above-mentioned posts contain false and manipulative claims. The claim that on August 25th, 2022, the UN General Assembly voted again on the resolution adopted on March 2nd and received less support is false. In the schedule of meetings of the General Assembly, there is no information about a similar meeting held on August 25th. The claim that the statement made on August 24th confirms that 91 countries have changed their position towards Russia is manipulative because the statement was made at the initiative of the signatory countries, it was not discussed by the General Assembly, and other countries have not expressed their stance about it.

On March 2nd, 2022, the UN General Assembly indeed adopted a resolution (ES-11/1), which, on the one hand, reaffirmed the support of member states for the sovereignty, independence and territorial integrity of Ukraine and, on the other hand, demanded from the Russian Federation “immediately, completely and unconditionally withdraw all of its military forces from the territory of Ukraine within its internationally recognized borders.”

The mentioned resolution was adopted within the eleventh extraordinary session of the UN General Assembly, which was convened on February 28th in response to Russia’s invasion of Ukraine. On March 24th, the General Assembly adopted another resolution (ES-11/2) in an emergency session calling on the parties to the war to protect civilians, journalists and representatives of humanitarian missions, as well as criticizing Russia for creating a dire humanitarian situation caused by its invasion of Ukraine. 140 member states supported the resolution, 5 countries voted against the resolution, and 38 abstained from voting.

Another meeting of the emergency session took place on April 7th after the release of footage taken in the Ukrainian city of Bucha. By the resolution adopted at the meeting (ES-11/3), Russia’s participation in the Human Rights Council of the United Nations was suspended. 93 states supported the said resolution, 24 states were against it, 58 abstained from voting, and representatives of 18 states did not appear at the meeting.

In the resolution of April 7th, it is additionally mentioned that the eleventh extraordinary session was temporarily suspended, and the President of the Assembly has the right to resume it based on the request of the member states. On August 25th, 2022, the UN General Assembly did not vote for a resolution supporting Ukraine either within this session or outside of it. In the schedule of meetings of the General Assembly, only informal consultations are indicated around the upcoming summit on August 25th:

During this period, namely on August 24th, the UN Security Council held a session on the topic of Ukraine, the main purpose of which was to summarize the first six months of the conflict and discuss current topical issues, such as the Zaporizhzhia NPP and the export of grain from Ukraine.

The President of Ukraine, Volodymyr Zelenskyy, was virtually present at the said meeting, which was protested by Russia’s representative to the UN, Vasily Nebenzya, and demanded a procedural vote on the issue. As a result of the vote, thirteen states supported Zelenksyy’s virtual attendance at the session, China abstained from voting, and only Russia went against it.

Beka Vadrosanidze’s post contains a screenshot of the Agenda.ge article, which is dedicated to the joint statement made by the 56 UN member states and the European Union on August 24th. Vardosanidze refers to the mentioned statement as a “UN statement” and compares it to the resolution adopted by the UN General Assembly on March 2nd, 2022. According to him, the fact that 141 countries supported the resolution while only 50 countries issued a general statement means that some countries have changed their position toward Russia.

In fact, the mentioned statement was made at the initiative of the signatory countries, and it does not represent the general position of the United Nations as an organization. Also, it was not discussed by the General Assembly, and there was no vote on it. With this statement, the countries once again supported the sovereignty, independence and territorial integrity of Ukraine within the internationally recognized borders and called on the Russian Federation to stop attacks against civilians and infrastructure.