Did ICC Acknowledge the Complaint by “Anshei Emet” and Which Inaccurate Data is It Based On? 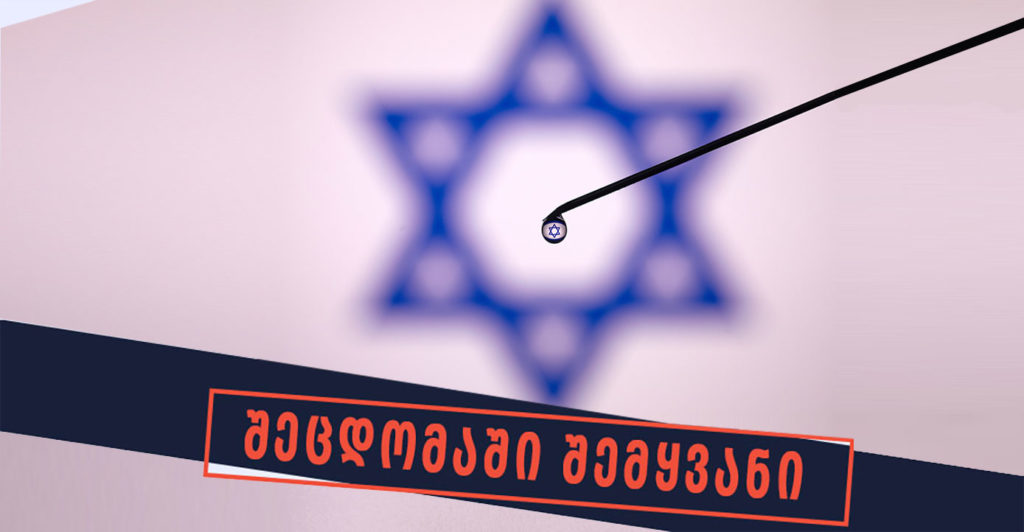 A Facebook page „მარიამ კუბლაშვილის საადვოკატო ოფისი / Mariam Kublashvili Law Office” published a post on April 16, claiming that “Anshei Emet” Fellowship submitted a complaint to the International Criminal Court (ICC), located in Hague, Netherlands, against the Government of Israel. The Fellowship claims that the Government of Israel forced the population to take part in a universal vaccination, the long-term harmful effects of which are still unknown to scientists. 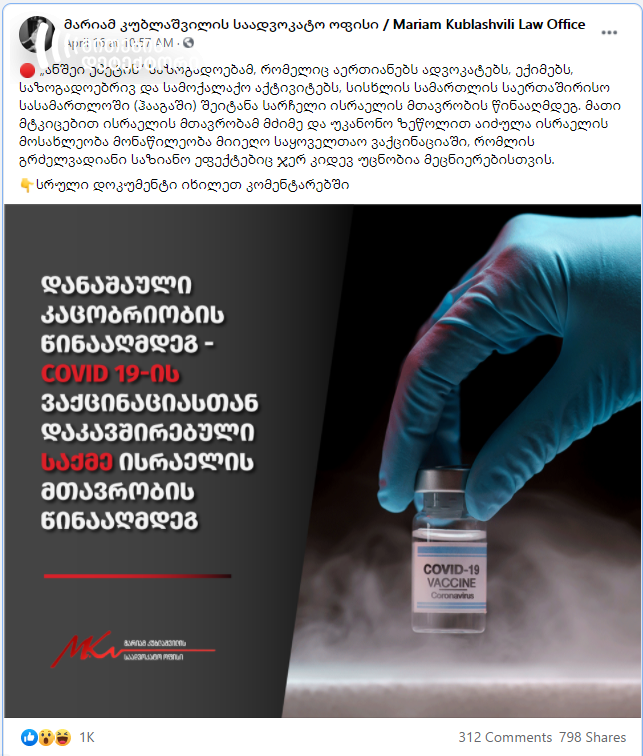 In the full text of the complaint, the authors accuse the Government of Israel of violating the Nuremberg Code. They also mention that the Ministry of Health acknowledged that severe side effects have been identified in 41% of the vaccinated police officers, military staff, education and medical workers.

The ICC has not reviewed the complaint yet.

In March 2021, a movement called “Anshei Emet” (which translates as “the people of truth”), an anti-vaccination organization, indeed submitted the complaint against the Government of Israel to the ICC, but this does not mean that the Court acknowledged the complaint or began an investigation on it. Initially, the Prosecutor’s Office of the Court should review the complaint and decide, whether there are reasonable grounds for starting the investigation.

The Prosecutor’s Office at the ICC commented with the Reuters that they receive lots of complaints from various parts of the world, but their confirmation of receipt should not be perceived as an agreement to review the complaint.

The complaint, submitted against the Government of Israel, is also not available on the webpage of the ICC among the cases, in which a preliminary or a direct investigation has been launched.

Fewer than 0.3% of the vaccinated showed side effects in Israel.

The complaint by Anshei Emet mentions that there is no full account of deaths and injuries after the vaccination. This is a conspirative claim, as the Ministry of Health of Israel has been publishing data on clinical trials and the side-effects among the vaccinated step-by-step.

In addition, the complaint claims that the Ministry of Health acknowledged that severe side effects have been identified in 41% of the vaccinated police officers, military staff, education and medical workers. There is no such statement in open sources. It also contradicts the official data. The given figure matches the share of those who felt unwell after the first vaccination, but this is not considered to be a severe side effect and is normal after getting vaccinated.

An article, published on February 2 by the Times of Israel, mentions that fewer than 0.3% of the vaccinated showed side effects.

It is noteworthy that only 165 cases of an allergic reaction, including anaphylactic shock, were recorded after the first dose of the vaccine. The number was even lower for the second dose – 47.

As the Jerusalem Post writes, two vaccinated people died during the clinical trials of the Pfizer vaccine, but the United States Food and Drug Administration (FDA) did not find a link between those deaths and the vaccine.

The complaint also mentions that the mRNA vaccine against the coronavirus is innovative and hence, the Government of Israel violates the Nuremberg Code by vaccinating the citizens without notifying them that they are participating in a medical experiment. In this regard, the complaint mentions a contract signed by the Prime Minister of Israel, Benjamin Netanyahu, and Pfizer, which, allegedly, indicates that Israel receives millions of doses of the vaccine in exchange for its population becoming a participant of the pharmaceutical company’s experiment.

The contract, signed by the Ministry of Health of Israel and Pfizer does not mention any kind of experiments. It concerns the cooperation on sharing information about the distribution and the administration of the vaccines. In this regard, Israel’s Helsinki Committee expressed concerns that sharing data on the efficiency of the vaccines might have resulted in personal data breach. This statement has since become a source of disinformation, according to which the Helsinki Committee says that Pfizer is carrying out illegal experiments on people. Israel’s Helsinki Committee denied such disinformation and stated that the ongoing vaccination in Israel is not an experiment.

AstraZeneca vaccine does not violate the Nuremberg Code

The complaint also mentions that the Government of Israel did not inform its citizens about alternatives to the anti-coronavirus vaccination. It is noteworthy, however, that there is no approved drug or any other method for treating the coronavirus. Before launching the vaccinations, Israel adopted strict quarantine measures that have since been incrementally abolished. After nearly 81% of the country’s population older than 16 years got vaccinated with the second dose of Pfizer’s vaccine and the coronavirus infection and hospitalization cases drastically plummeted, Israel abolished the mandatory wearing of face masks outdoors.