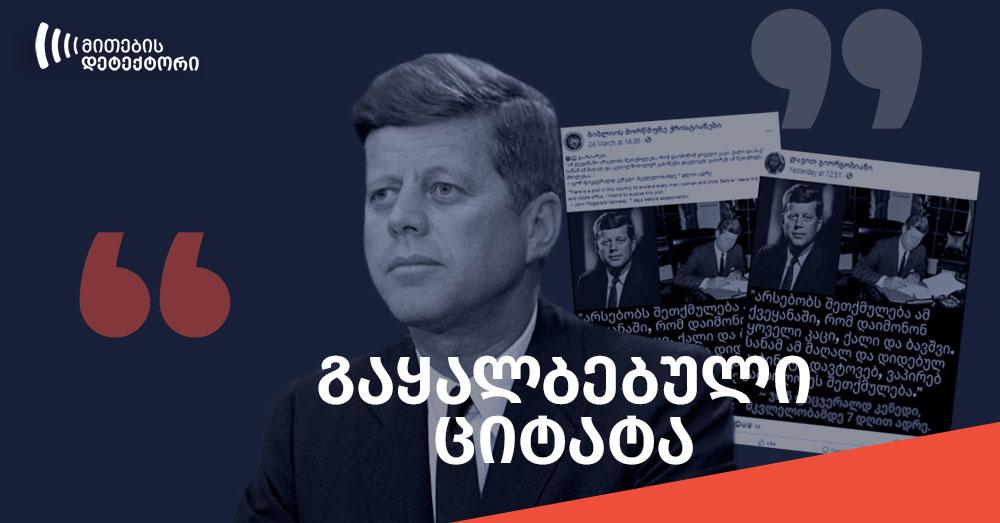 On March 24, 2021, a Facebook user “Christians Who Believe in Bible” published photos of John F. Kennedy, the 35th President of the United States, together with the following quote: “There’s a plot in this country to enslave every man, woman and child. Before I leave this high and noble office, I intend to expose this plot.” According to the description of the photo, the US President said this seven days before his assassination. On March 25, Davit Giorgobiani, the host at TV Samepo Akrhi shared the identical photo and quote. 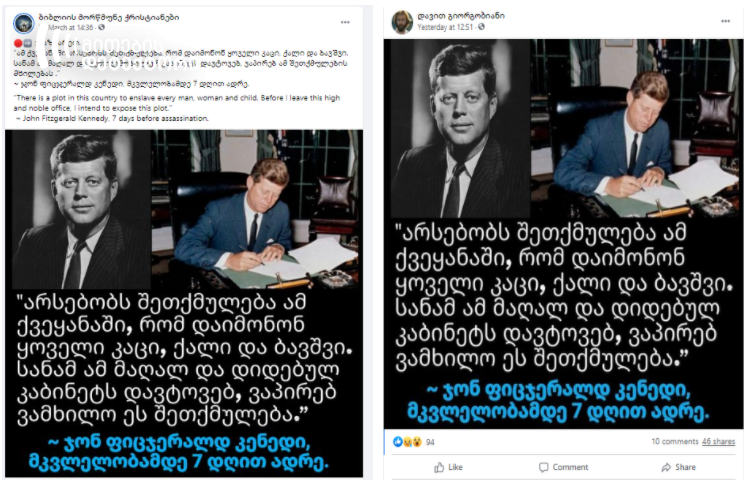 The quote disseminated by the Christians Who Believe in Bible is Fake and does not belong to John F. Kennedy. There is no proof in open sources that the US President said anything like this either several days before his death, or anytime else.

Like the Georgian Facebook users, the said quote has been attributed to John F. Kennedy on English-speaking social networking sites and online platforms for years. It is claimed that Kennedy said these words a week before his death (November 22, 1963), exposing illuminati and other secret societies. PolitiFact, an American fact-checking organization, checked the authenticity of the quote in 2019, the Reuters did it in 2020, but none of them count find this or any similar quote in Kennedy’s public speeches or press conferences.

The webpage of John F. Kennedy Presidential Library and Museum stores Kennedy’s all statements and public addresses between 1942 and November 21, 1963. If one were to assume that Kennedy made this statement a week before his death, then it should be present in the public address texts from November 15, 1963. According to John F. Kennedy Presidential Library and Museum, he only made two public statements on November 15, 1963: the first one was made at the American Federation of Labor and Congress of Industrial Organizations (AFL-CIO) Convention, while the second one – at the National Convention of the Catholic Youth Organization. Kennedy has not said anything similar to the aforementioned quote in his two statements. President’s agenda from November 15, 1963, located at the website of the Library, does not include any other meetings.

PolitiFact contacted John F. Kennedy Presidential Library and Museum concerning the quote. As a spokesperson for the Library Archive told the fact-checking platform, inquiries on verifying the given quote are frequently submitted to the Library, but researchers could not find the respective quote either in the 1963 archives or in any trustworthy secondary source.

It is noteworthy that the google search of the quote shows several books written in different years which all include the quote. All these books mention John F. Kennedy as the author of the quote and claim the date of the quote to be November 15, 1963. These books, according to their annotations, offer alternative truth and history. 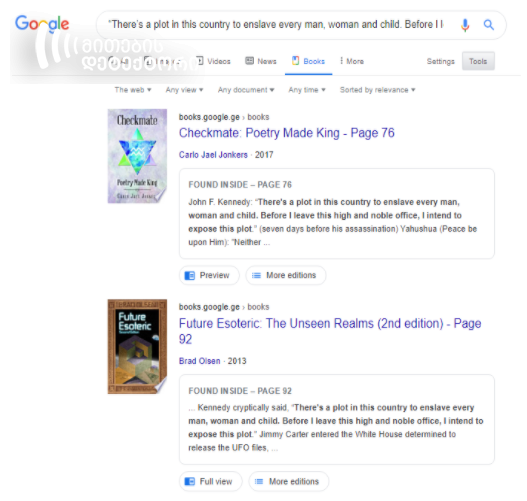 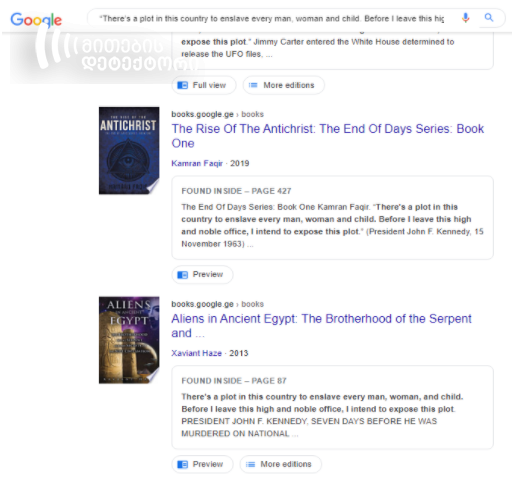 Conspiracy theories about the assassination of John F. Kennedy have been disseminated since 1960s. In different periods, the Government of Cuba, mafia, CIA, and other actors have all been accused of assassinating Kennedy. One of the most widespread conspiracies in the 21st century connects the assassination of Kennedy to the illuminati and the so-called “deep state” representatives.