AstraZeneca vaccine does not violate the Nuremberg Code 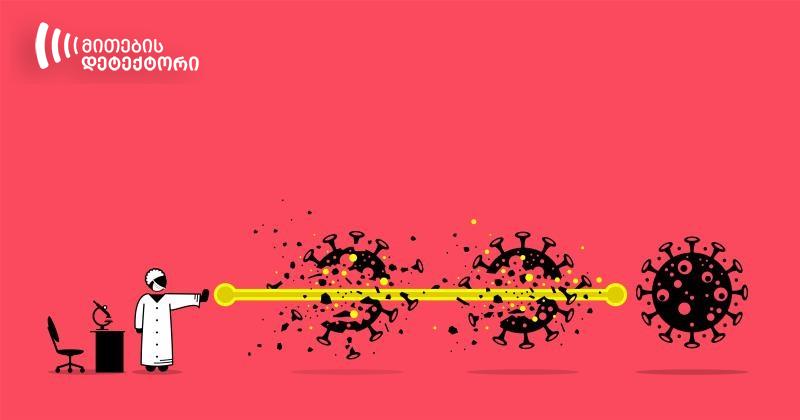 On March 7, 2021, Facebook user Koba Kuprashvili talked about the AstraZeneca vaccine in a Live video on his personal Facebook page and listed the reasons for which, in his view, a person can refuse to take a vaccine. Kuprashvili noted that “The Nuremberg Code”, adopted in 1997, prohibits genetic therapy, while AstraZeneca, according to him, violates the Code since it represents a genetically modified organism.

Some of the opinions expressed by Koba Kuprashvili in the video are false or manipulative. 1. Vaccines do not violate the principles of the Nuremberg Code. In fact, the Nuremberg Code was about doing human experiments, rather than vaccination. The first principle of the Code emphasizes the need for voluntary consent. 2. The fact that the AstraZeneca vaccine contains genetically modified organisms allows for misinterpretations. In fact, it does not cause genetic modification of humans. In addition, the virus that enters the cell as a result of vaccination lacks genes that would allow it to replicate.

According to Kuprashvili, the Nuremberg Code, adopted in 1997, which represents a continuation of the Nuremberg Declaration, adopted in 1947, prohibits genetic therapy. Accordingly, since the AstraZeneca vaccine contains genetically modified organisms, he says, it violates the Code.

The Military Tribunals were held in German city of Nuremberg in 1945 and 1946. The tribunals were for the prosecution of 23 doctors and administrators, who conducted medical experiments on concentration camp prisoners during World War II. The court verdict included a detailed description of „Permissible Medical Experiments“. A set of 10 ethical principles established the Nuremberg Code. The first paragraph of the Code supports the principle of voluntary consent.

It must be noted that all ten principles of the Code are set out on the website of the U. S. Holocaust Memorial Museum, as well as in the article from the New England Journal of Medicine. None of them mention genetic therapy and genetically modified organisms (GMO).

In addition to the National Plan for the Introduction of the COVID-19 vaccine in Georgia, which provides that vaccination is voluntary and a vaccine recipient will receive full information about all potential risks and side effects, it should be also noted that people participating in vaccine trials, prior to its approval, were volunteers, which corresponds to the first paragraph of the Nuremberg Code.

2. How does the AstraZeneca vaccine work?

According to Koba Kuprashvili, AstraZeneca offers us a vaccine that contains a genetically modified organism. It should be noted that such a formulation allows for misinterpretations and gives the impression that the vaccine causes changes in human genetics.

Oxford-AstraZeneca vaccine is based on the genetic instructions for the production of so-called “spike” protein. The researches added the gene for the coronavirus “spike” protein to adenovirus. However, in contrast to the Pfizer-BioNTech and Moderna vaccines, the instructions are stored in double-stranded DNA, rather than in single-stranded RNA. It must be noted that adenovirus can enter the cell, but cannot replicate in it. After injection of the vaccine into a persons muscle, the adenoviruses crash into cells and “latch onto proteins” on their surface. The cell ingulfs the virus in a bubble and absorbs it inside. Once inside, the adenovirus leaves the bubble and moves to the nucleus, where the cell’s DNA is stored. The adenovirus inserts its DNA into the nucleus. It is noteworthy that the adenovirus is engineered, so that it cannot replicate [make a copy of itself], but the cell can read the gene for the coronavirus “spike” protein and copy it into a molecule, called mesenger RNA or mRNA.

The Alliance of Science, Cornell University’s scientific website, reviews how the vaccines work and explains what it means when a vaccine contains genetically modified organisms. According to the material, AstraZeneca vaccine uses a “viral vector” approach. Vector viruses are stripped of the genes that might harm people or cause disease. In addition, the virus genes responsible for replication are also removed. Sometimes live viruses in the vaccine tend to mutate and return its pathogenic character. In contrast, a genetically modified virus-based vaccine will not cause such harm to humans.