Are the British Tired of “Carrying Christ’s Cross”? – No, Muslim Community Has Not Bought 500 Churches in London 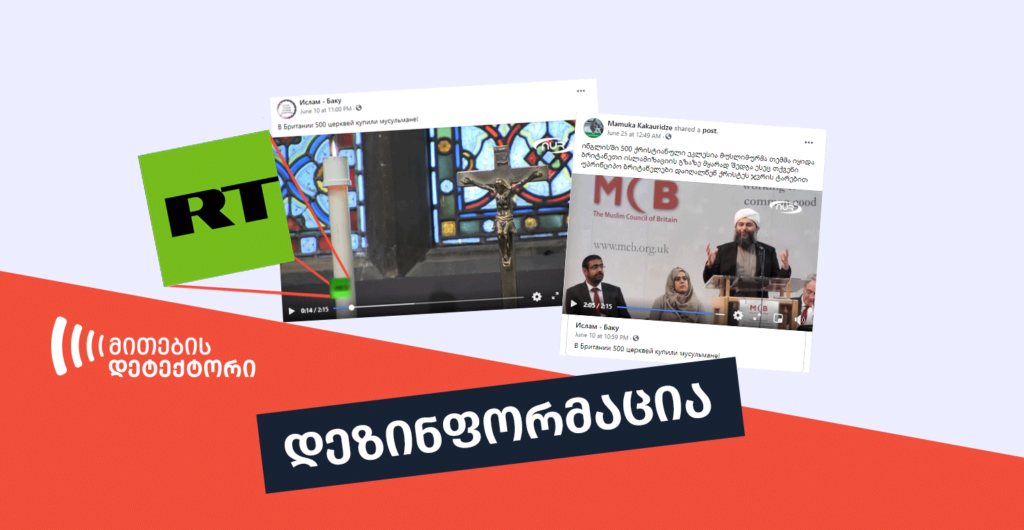 On June 25, 2021, a video by a Russian Islamic page Ислам – Баку (Islam – Baku) was shared in a Facebook group Photo-Fact GEORGIA. The video mentions the increase in the size of Muslim community in London and the rising number of mosques. In the video, which comes with a logo of RT, a Russian propaganda channel, it is also claimed that 423 new mosques have been opened in London in last several years, whereas 500 Christian churches have been closed down. In some cases, the video goes, the Muslim community purchased former church buildings and re-opened them as mosques. Based on the video, Islam – Baku and Georgian Facebook users claim that Muslims bought 500 churches in Great Britain – something that the members of Photo-Fact GEORGIA group label as Britain’s spinelessness and an evidence of Islamization. 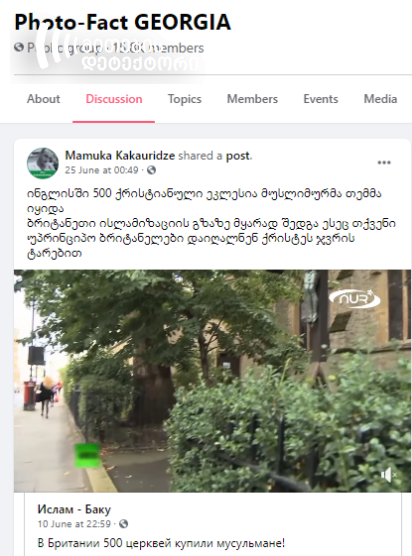 The manipulative reports about closing down churches and opening mosques instead in the United Kingdom first emerged on the Gatestone Institute, an English blog, in 2017. The blog claimed that the Muslim community and multiculturalism are directly connected to religious fundamentalism and an increase in the threat of terrorism in England. It is in this context that the report about opening 423 mosques “on the sad ruins of English Christianity” against the background of closing down 500 Christian churches since 2001 in the capital city of the UK is introduced. The article by the Gatestone Institute says nothing about Muslims buying 500 churches.

British and US American fact-checking platforms Full Fact and Snopes verified the content of the 2017 blog post. According to Full Fact, the report on closing down 500 Christian churches is based on a 2012 article by the Wall Street Journal about using religious buildings for other purposes and mentions that since 2001, in the UK, more than 500 buildings, previously owned by the Church, were given to private owners, and that these buildings were mostly reopened as residential projects. The article never mentions that members of a certain religious minority group bought these buildings or that they were converted to mosques. In addition, the Wall Street Journal article emphasizes the conversion of the churches to private houses, without specifying when the religious service was stopped in these churches. Therefore, the closing down of the given churches may not coincide with opening mosques in the UK.

Moreover, as the webpage of the Church of England claims, only a small number (20-25) of churches are closed down across the country annually. In certain cases, the reason behind closing down the church building is that the congregation moved to a new building, meaning that the old building becomes a private property through an auction. According to the same webpage, most closed churches are found a new use – mostly becoming a religious building for another Christian body, but also a cultural or community facility (such as a community center, library, or a museum), residential, and office building. There are, however, some cases when the Muslim community buys the Christian church for prayers or community gatherings.

Despite closing several churches, according to the UK Church Statistics, the number of churches in the United Kingdom grew by 800 between 2005-2015. National Churches Trust, an organization specializing in maintaining and supporting Christian churches in the United Kingdom, currently reports up to 41,000 churches of various Christian denominations. The organization also reported in 2018 that the number of Christian churches in the UK not only far exceed religious or ritual buildings of other confessions, but also clubs, public libraries, post offices, and other public facilities.

The given statement, mentioned in the Russian video, has been disseminated on English blogs in an Islamophobic context since 2017. According to Full Fact, the Gatestone Institute took this number from UK Mosque Statistics, published by the webpage Muslims in Britain. According to the 2017 version of the said statistics, there were a total of 477 mosques and Islamic religious buildings in London, but it never claims that 423 from those were opened in recent years and are “new” mosques. In fact, most of the mosques in London were constructed before 2000, in the last century.

According to a 2012 article by the Architects Journal, there were up to 1,500 acting mosques in the UK in 2012, however, only 200 of those were initially built to serve as mosques. According to Statista data, there were 1,621 mosques in the UK in 2017, with most of them being small-sized (capacity lower than 300 people). As of 2020, there are 1,750 active mosques in the UK. Based on these data, it can be concluded that the number of active mosques in the country increased by approximately 250 in the last eight years. Therefore, the reports about “423 new mosques” being opened in London in the recent years are not true and represent a case of statistical manipulation.

According to the data by the Office for National Statistics of the United Kingdom, there are up to 3.4 million Muslims residing in the UK which accounts for 5.2% of the entire population.

Origin of the video

The Russian video uses footage from a 2013 TV report by Russia Today, but the dubbing and the content are changed. The Russia Today report was about the spread of Islam in London, but it did not mention the 500 closed churches or new mosques at all. The video, shared by Islam – Baku was prepared by a Russian NUR TV in 2021. NUR TV is a media outlet focusing on Islam, Quran, and other actual issues for the Muslim community.

The Facebook group Photo-Fact GEORGIA was created in 2015. Currently it counts more than 15,000 members and is managed by a Facebook user Mamuka Kakauridze. The content of the posts in the group varies, but throughout the last year, posts about the coronavirus and some disinformative posts were being published most frequently.