Worm or Dark Textile? – What is Seen Under the Microscope 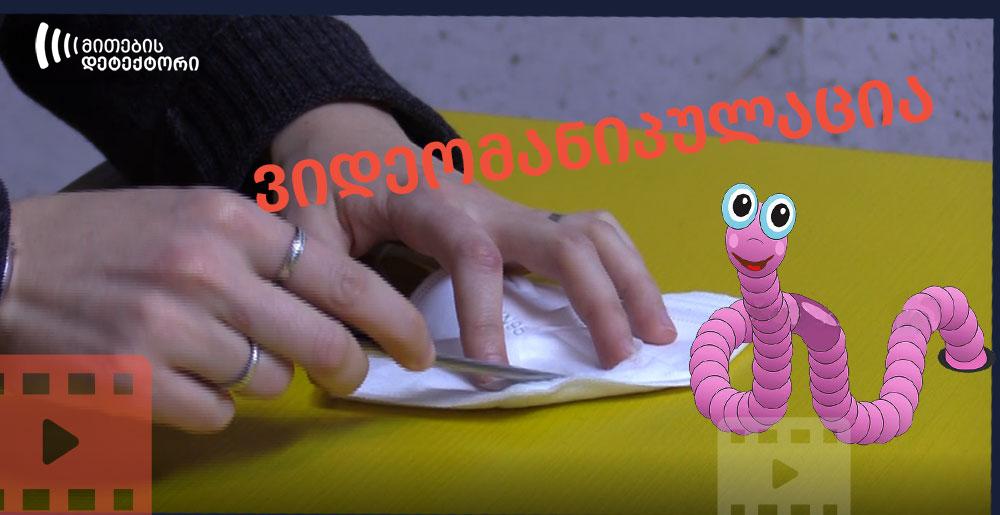 On March 30, 2021, Facebook user Nina Marji shared a video depicting a person cutting the mask and showing the worms inside of it.

The video went viral in Georgia as well as other countries. It was shared in various Facebook groups, including „კორონა მაფია“ (Corona Mafia), where false information about COVID-19 is often shared. 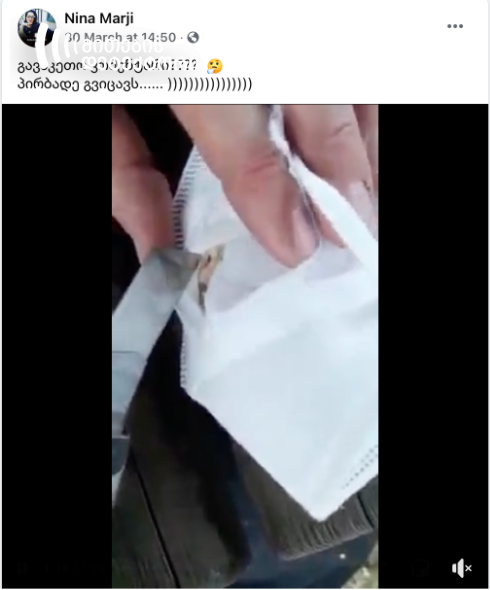 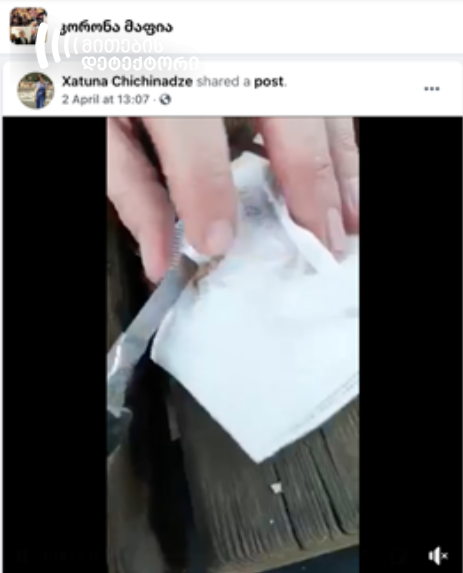 Moreover, other videos claiming that parasites and worms reside in masks were being spread as well. On March 25, Facebook profile Gocha Chumashvili shared a video, where a dark thread-like moving fragment appears on the screen after placing the mask under a microscope, about which Chumashvili writes – “masks are contaminated by parasites”.

Videos with similar content of conducting microscopic observation on surgical masks were also disseminated by Facebook pages “ახალგაზრდული”(Youth), “სულიერი სამყარო”(Spiritual World), Facebook profiles “Levan Navi” and “Manqanit Momsaxureba Athenshi”. Half of the sources call them parasites and the other half – worms of the “Morgellons” disease. Facebook user Koba Kuprashvili has a different idea, stating that we are not dealing with “Morgellons”, but “thread-like mini-robots”.

On April 8, a video, where a Georgian individual living in Germany conducts the experiment, was published by Captain Domenic Mango’s Facebook page. It is stated in the video, that masks contain living organisms, and inhaling them makes people sick. 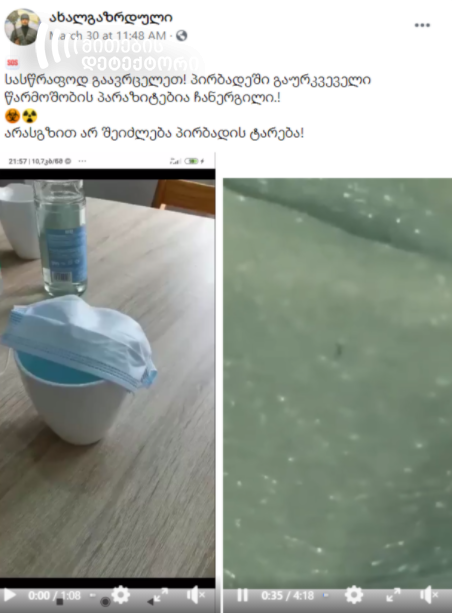 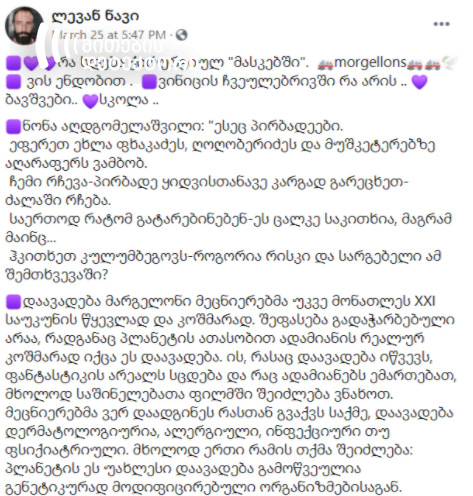 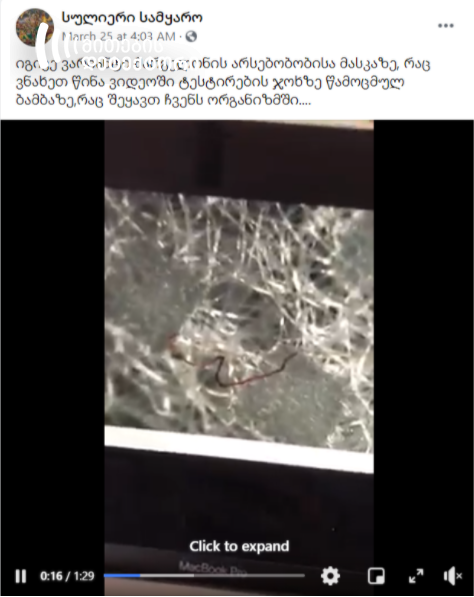 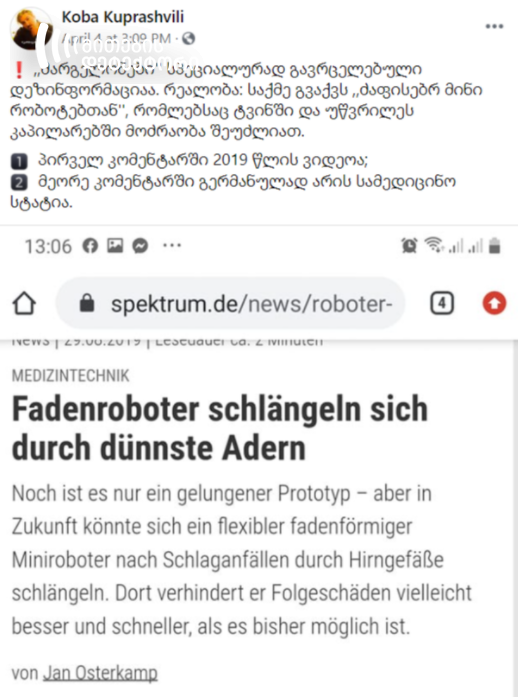 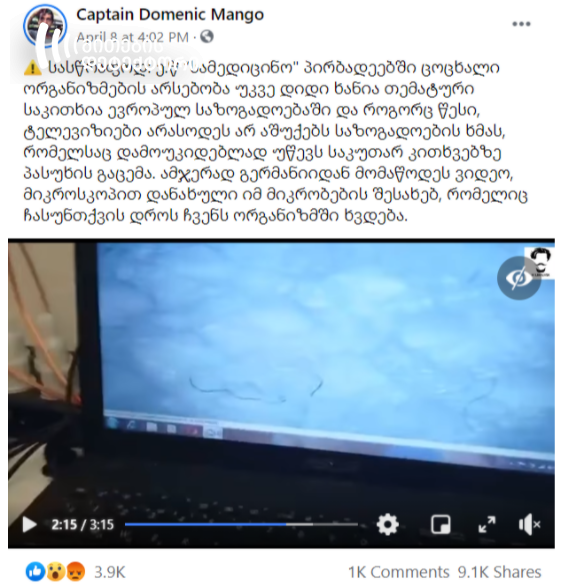 The disseminated information is a video manipulation. In reality, worms or any type of parasite do not reside in unused masks. “Myth Detector” conducted an experiment, on one hand by cutting the mask, and on the other hand, by putting it under a microscope, but no worms were discovered in either case. According to researchers, dark thread-like objects spotted with the microscope are actually textile fibers, whose movement can be caused by static electricity or air currents.

It should be noted that in the first video depicting a person showing worms in the mask, said individual cuts the mask from the front, but does not show the state of the mask from the back, which raises ground for suspicion that they may have damaged the back of the mask and placed worms in it themselves before shooting the video.

“Myth Detector” decided to conduct the experiment. We also cut the mask depicted in the video, however, no worms were discovered there.

As for other videos, where surgical masks are observed through a microscope, claiming that “Morgellons worms” reside inside, “Myth Detector” conducted another experiment and observed the mask via microscope in Ilia State University’s laboratory. After the microscopic observation, we actually noticed a small dark thread on the mask, but a researcher at the Institute of Ecology of Ilia State University, Levan Ninua explained that this is not a worm, but a dark textile, which can be seen in contrast with the white mask.

AFP Fact Check also fact-checked disseminated video manipulations and got in touch with scientists. According to their statement, masks may contain threads that got inside during the manufacturing process or later, before the usage. Nevertheless, it is not dangerous. As for their movement, according to the researchers, the textile can move because of static electricity, or because these “aerosol fibers” are very light and the movement of air currents, which usually cannot be felt by humans, can move the textile fibers.

It should be noted, that masks shown in the video may already have been used, in which case, other microorganisms residing in the mask will be visible under the microscope. Marina Jovanovic, an expert in biological science and research associate at the Institute of General and Physical Chemistry in Belgrade states in a comment with AFP, that when we use masks, we can bring on various microorganisms. According to her, what is shown in the videos are not parasites or some living organisms, but fragments.

Do “Morgellons worms” exist and how is it connected to masks?

“Morgellons” is a skin disease, about which “Myth Detector” has written before. Patients often compare this condition to worms moving on their skin, but according to research conducted in 2012 by the US Center for Disease Control and Prevention, which studied symptomatic humans, most materials collected from participants’ skin were composed of cellulose, and presumably were cotton fiber, micro bacteria or parasites were not discovered in the research.

Similar to masks, information about the existence of “Morgellons worms” was disseminated about coronavirus antigen tests as well. Test swabs were placed under the microscope claiming that by testing, Morgellons were implemented in the human body. The dark thread-like moving object depicted in the video about tests, is visually similar to organisms observed on a mask via microscope, however as previously mentioned, they are not worms, but textile fibers, whose movement is caused by electrostatic energy.

Read more on Morgellons in a publication prepared by “Myth Detector”: