Who’s behind the manipulative spread of Bera Ivanishvili’s video? 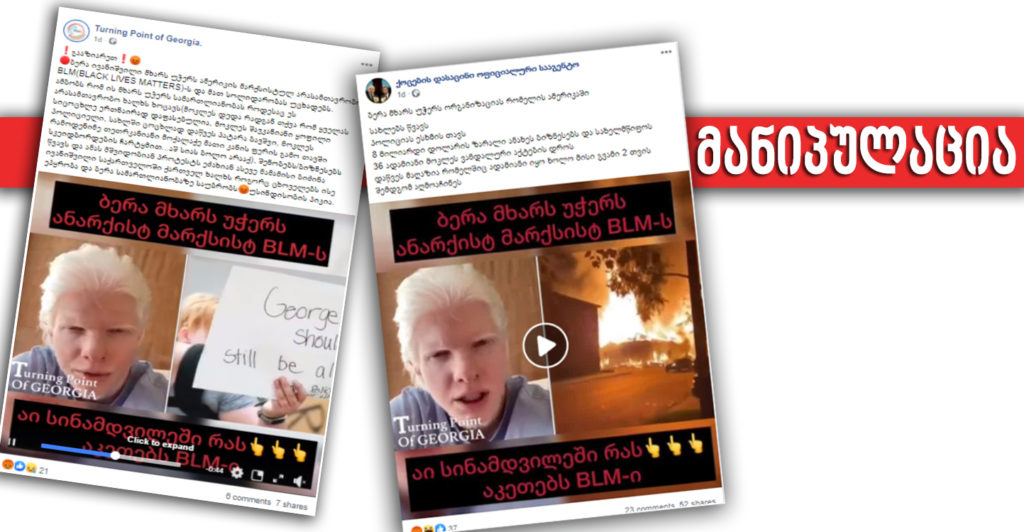 On 29th of August, 2020 Bera Ivanishvili published a videosupporting #BlackLivesMater on his Instagram profile. On 29th of August, page Turning Point Georgia spread Bera Ivanishvili’s video footage with accompanying footage of protest rally in the U.S. The page equates Bera’s declaration of solidarity to the BlackLivesMatter movement with the support for the crimes committed during large-scale protest rallies following the assassination of George Floyd in the U.S.  On 30th of August, the video was also spread by the anti-government pro-opposition page ქოცების დასაცინი ოფიციალური სააგენტო(Official Agency of Ridiculing Georgian Dream)

Turning Point Georgia.: “Bera Ivanishvili supports Marxist non-governmental BLM (BlACK LIVES MATTERS) of the U.S and declares his solidarity. He states that he supports justice when this non-governmental organization kills people (they killed a mother because she said all lives should matter equally, killed a black former policeman, burned a small child alive at home, killed several white citizens because of their skin color by striking them with skateboards…and so on. This list has no end), burns down buildings/businesses and they call it a peaceful protest. Moreover, his father, Bidzina Ivanishvili treats Georgian people like animals in Georgia and Bera talks about justice. Immorality at its’ highest”

Official Agency of Ridiculing Georgian Dream: “Bera supports the organization that in the U.S burns down houses, assaults police, caused 8 million dollar loss to businesses and state, killed 36 people during acts of vandalism, burned down a shop with an individual inside it, whose corpse was discovered 2 months later.” 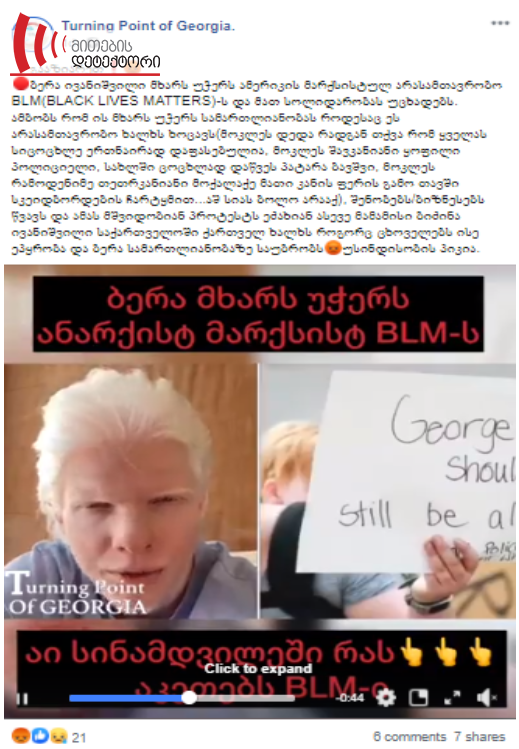 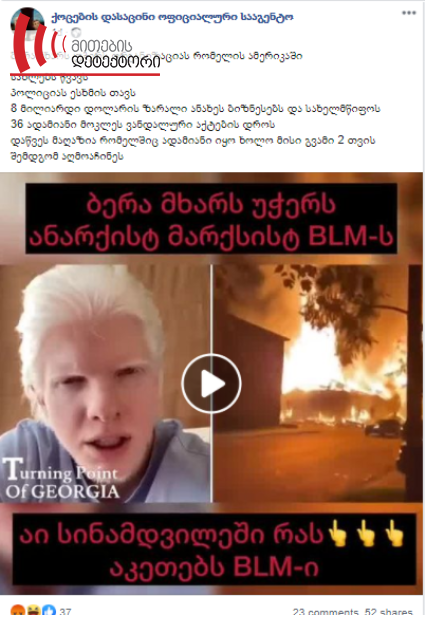 Disseminated posts by Turning Point Georgia and Official Agency of Ridiculing Georgian Dream is a manipulative post, because Bera in his English video speaks about equality and declares his support for the protest that aims to protect black people, and not for the specific organization BLM.

What does Bera Ivanishvili say in his video?

Bera Ivanishvili published a video with a hashtag #blacklivesmatter, where he states the following:

“Hi everyone, hope all of you are safe out there, so even though I live miles away I want to stand by your side and say that black lives matter. You know, I was raised in a family that believes in equality of all humans, and my wife and I strive to raise our son with the same world principles because we believe that each and every one of us can and should contribute to making this world a better place. This is a just message of peace by fellow human. God bless.”

The mentioned video has no relations with organization BLM, i.e. Black Lives Matter Foundation, support for which Bera Ivanishvili is ascribed to by “Turning Point Georgia” and “Official Agency of Ridiculing Georgian Dream”

Organization BLM i.e., Black Lives Matter Foundation was founded in 2013 after the court acquitted George Zimmerman on a charge of killing underage unarmed Afro-American. Currently, the organization is a decentralized network of black human rights activists in the U.S, Canada, and Great Britain that doesn’t have an official hierarchical structure. In 2014-2016 BLM organized several large-scale protest rallies because of police violence and killings of Afro-Americans.

Black Lives Matter has attracted international attention following the protest rallies over the assassination of George Floyd on 25th of May, 2020, when the name of the organization became the primary slogan of one of the largest mass protests in American history. After May 2020 #BlackLivesMatter is a name not only of the specific organization but generally, of an international protest movement that besides protest rallies, is related to equality, police violence, and protection of the Afro-American human rights. 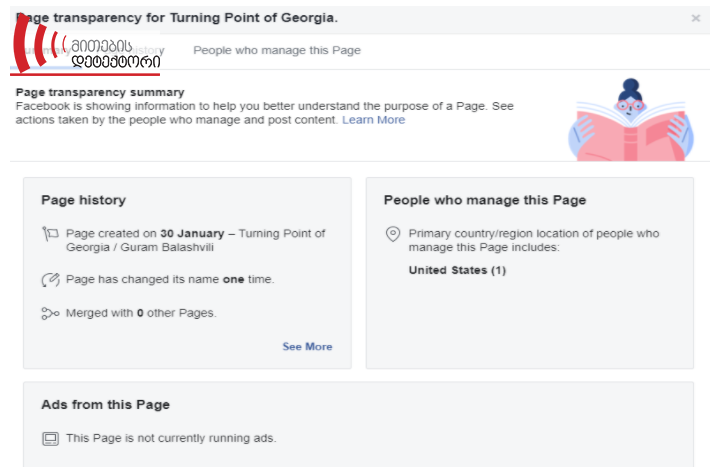 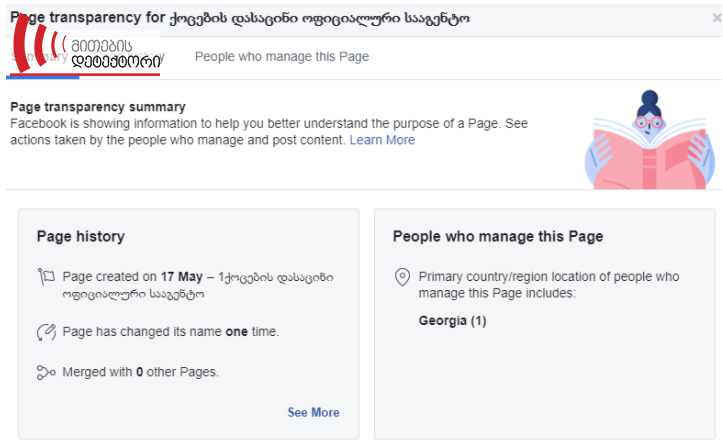 It’s worth mentioning that Facebook already deactivated a page with the same name once before as a page related to the United National Movement. This was disclosed in a report published by the company on May 5, 2020. Although Facebook didn’t public the full list of around 80 deactivated pages related to the United National Movement the report cites the post of the Official Agency of Ridiculing Georgian Dream as an example. 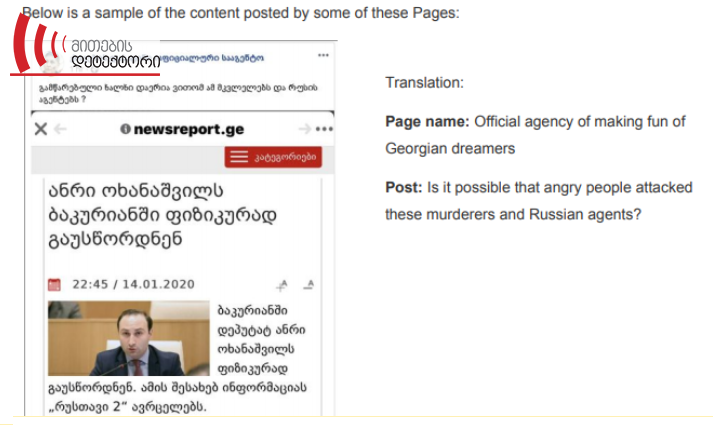