Who is Afraid of Non-Governmental Organizations? 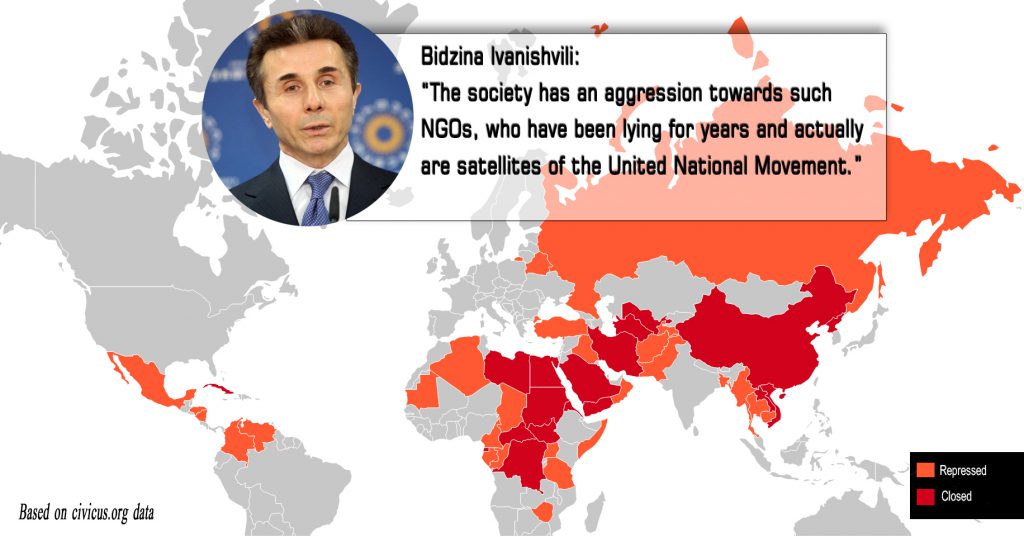 In the interview with Imedi TV on November 27, Bidzina Ivanishvili, chairman of the ruling Georgian Dream party, expressed his negative attitude towards the IRI and NDI-commissioned public opinion polls and even addressed an open letter to the U.S. President, because, as he claimed, these American organizations cause harm even to the U.S interests. Ivanishvili noted that the non-governmental organizations have been lying for years and actually, they are satellites of the opposition party United National Movement (UNM).

A week earlier, on November 18, the International Republican Institute (IRI) released a public opinion survey, according to which 31% of respondents somewhat support and 47% strongly support transition to a fully proportional electoral system in Georgia.  Moreover, asked if elections were held tomorrow, for which party would you vote, only 23% of respondents named Georgian Dream as their first choice. IRI’s survey gave way to new attacks on non-governmental organizations. On November 26, Imedi TV even dedicated a program to the so called “German model” and non-governmental organizations, offering an interactive question: “How do you assess the activities of non-governmental organizations in Georgia?” The program hosts and guests questioned the impartiality of NGOs and accused them of political positioning.

The same narrative about IRI and NDI was periodically voiced by pro-government actors and pro-Russian political party, Alliance of Patriots of Georgia.

Bidzina Ivanishvili, chairman of Georgian Dream party: “The people ruled by Natsis [derogatory term for UNM members] are now ruling NGOs financed by the Americans… It is a regrettable reality and the same happens in the NDI and IRI surveys… It continues for years. Ratings are published and they are published by a very serious organization of our strategic partner and this organization no longer enjoys public trust. The results of their surveys are met with a smile and it is a regrettable reality.”

Vaka Gorgiladze, host of Arena: “There is IRI, there is NDI and there is Georgian Dream, which according to all international forums, various government officials and various international delegations, is a political force pursuing consistent, principled and pro-Western policy; everybody acknowledges it and at the same time, we see that these various institutions are occupied with destruction in Georgia and what is most important, these organizations simultaneously have a hostile attitude towards [U.S. President] Donald Trump.”

Avto Enukidze, Alliance of Patriots of Georgia: “You should have frozen all foreign-financed accounts of NGOs engaged in political activities seven years ago [after Georgian Dream came to power]. They can talk about butterflies, zoology as much as they want; but someone financed from outside must not interfere in my politics. This is what you should have done, to punish those who deserve punishment.”

It is worth noting that it is not the first attempt of discrediting the non-governmental organizations.  Last year, the statement released by a group of 13 non-governmental organizations regarding elite corruption and clannish rule in the judiciary was slammed by then Parliament Speaker Irakli Kobakhidze as an opinion of 13 men and women. Echoing Kobakhidze, Bidzina Ivanishvili also criticized the NGOs calling them “activists of the National Movement.”

Russia – In July 2012, Russia adopted the law, which requires that organizations receiving foreign funding must register as “foreign agents.” In addition, Russia’s National Security Strategy for 2016 considers foreign and international civil society organizations to be undesirable. According to the document, their activities are directed against Russia’s territorial integrity and aim at inciting internal political and social destabilization in the country that also implies inspiration of “color revolutions” and “actions against traditional spiritual values” of Russia. Pursuant to the law, in 2015, Russia’s Prosecutor General’s Office decided to classify the Open Society Foundations as an “undesirable” organization, while in 2016, first Sen. John McCain and then the International Republican Institute were also named as “undesirable.”

In July 2009, Natalia Estemirova, who worked for the Russian human rights organization Memorial, was kidnapped in front of her home in Chechnya and later her murdered body was found in neighboring Ingushetia. But nobody has been brought to justice so far.

On March 3, 2016, two employees of the Committee for the Prevention of Torture, traveling with foreign journalists on a monitoring trip through Russia’s North Caucasus, were hospitalized after being beaten by masked men wielding baseball bats, who later set their bus on fire. The Head of the Committee, Igor Kalyapin, was attacked a week later in the Chechen capital of Grozny, where local authorities investigated but never filed charges.

Bangladesh – According to the 2016 Foreign Donations Law of Bangladesh, the state imposes control on foreign-funded organizations. Under the law, such organizations must register with the NGO Affairs Bureau – a state institution seated within Prime Minister’s office. It is also worth noting that 54 news websites were blocked by authorities ahead of the 2018 elections in Bangladesh. In another development, photojournalist and human rights activist Shahidul Alam was detained for making “false” and “provocative” statements hours after giving an interview on the peaceful student protests.

Pakistan – In 2017, the Pakistani government warned 29 international non-government organizations that their applications to continue working in the country were rejected and that they should leave within 60 days. None was given a reason. Earlier in 2016, the authorities in Pakistan shut down critical women’s rights group (Taangh Wasaib Organisation (TWO) and police detained eight of its staff members.

Saudi Arabia – The government can deny licenses to new organizations and disband them if they are deemed to be “harming national unity”. Since May 2018, at least 22 women human rights defenders have been arrested. According to Amnesty International, some of them became victims of torture and inhuman treatment; however, the state denies all accusations. In January 2018, human rights defender Israa Al-Ghomgham was arrested for participation in peaceful protests and she is now facing death penalty.

Belarus – Under the law acting since 2011, NGOs are strictly restricted to receive foreign funding. They have no right to have accounts in foreign banks and all funds transferred from abroad should, at first, be examined and sanctioned by the government. Journalists and activists remain under pressure. Palina Sharenda-Panasiuk, an activist arrested during the March protests, has been charged with defamation for displaying a critical banner which read – “Lukashenka, you are a freak! Stop plundering our people!”

Rwanda – The authorities are interfering in NGO activities and exerting pressure on rights activists. In 2016, human rights defender Epimack Kwokwo was summoned to a Rwandan immigration office where he was declared persona non grata.

Sudan – Under the restrictive law of 2006, the government can restrict a non-governmental organization’s access to finances and other resources, also suspend its functioning and declare it as an illegal, terrorist organization. The government applies the law to arrest undesirable rights activists on charges of terrorism and anti-state actions.

Algeria – The law adopted by the Parliament in 2012 grants the government sweeping powers to refuse to register associations and organizations or restrict the scope of their activities. The 2012 law requires that associations seek re-registration every two years. Human rights groups including the Algerian League for Human Rights and Youth Action Rally have received no response when seeking re-registration.

Egypt – On 1st November 2018, eighteen people were arrested in a series of raids across Egypt. Those arrested included a number of human rights lawyers and activists. A new law on non-governmental organizations entered into force on July 24, 2019; however, the government is still interfering in the independence and finances of organizations. Photojournalist Shawkan Zeid has been in prison since 2013 and now faces the death penalty for his photojournalism work covering protests. 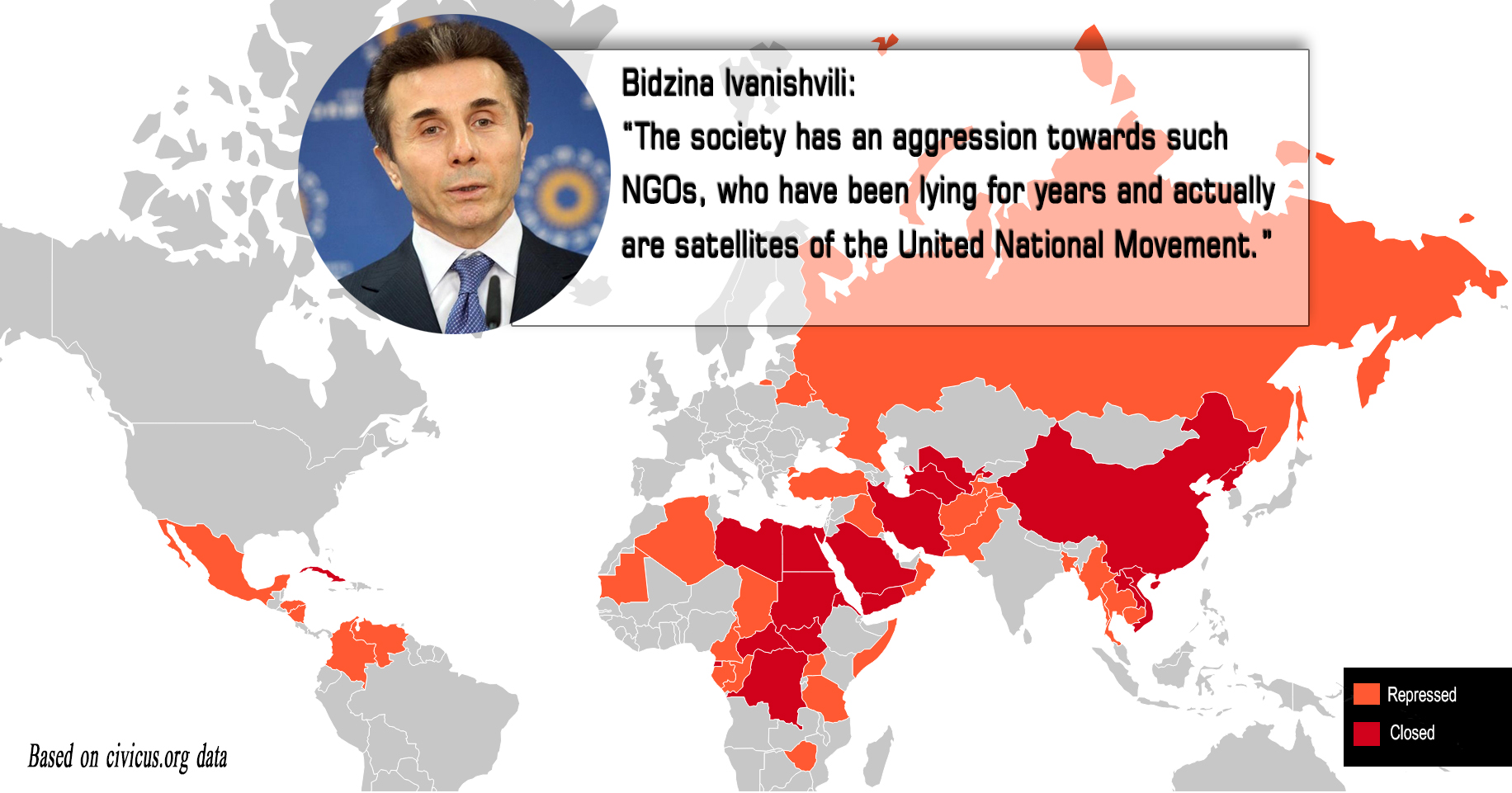