Who Disseminated Fake Documents About Ivanishvili? 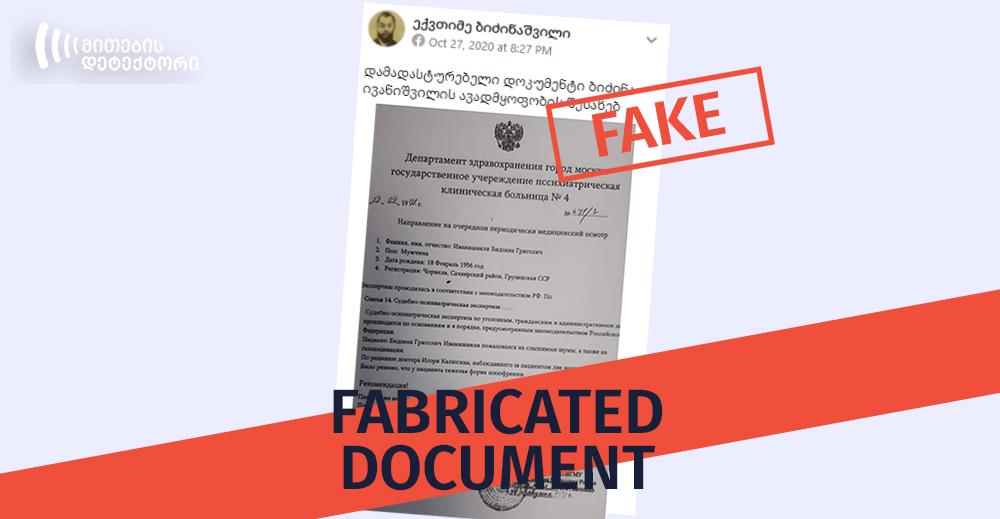 On October 27, „ექვთიმე ბიძინაშვილი“ (Ekvtime Bidzinashvili), a Facebook page, published a photo with a caption: “Document proving that Bidzina Ivanishvili is ill”. The photo shows a report from Moscow’s Fourth Psychiatric Hospital.

The disseminated document is fake, as the status and the coat of arms of the country indicated in the document was not used in 1991 anymore, whereas the text itself contains grammatical errors. 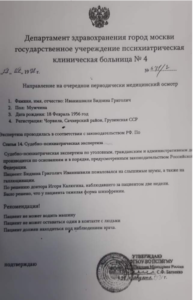 The given document includes several factual inaccuracies that put its authenticity under question:

The given document also includes grammatical and spelling mistakes – something that further aggravates the suspicions of its fakeness:

Dissemination of the document

The photo of the document has up to 170 shares on the Facebook page Ekvtime Bidzinashvili. The photo has also been posted by another Facebook page, „ლურჯი ვირი“ (Blue donkey), which has been actively disseminating discrediting memes and posts in the run-up to the parliamentary election. Both pages are affiliated with the United National Movement. According to the information, indicated on the page, it was created in November 2019 and is administered from Greece, despite having indicated Gibraltar as its location. 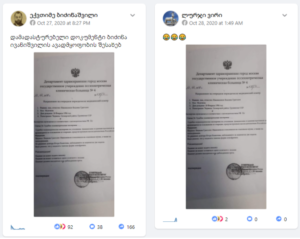 As for Ekvtime Bidzinashvili, it was created in April 2020 and became especially active in the pre-election period. Narratives disseminated by the page also aim to discredit Georgian Dream, in general, and Bidzina Ivanishvili, in particular.

The page also commented the hostage situation in a bank in Zugdidi and published posts where it tries to portray the terrorist who broke in the Bank of Georgia as being governed by the government. Another post suggests that the Head of the Regional Police, who was carrying out the negotiations with the terrorist, was actually an accomplice of the crime.