Which Anti-Turkish Messages have been Promoted by Pro-Russian Groups? 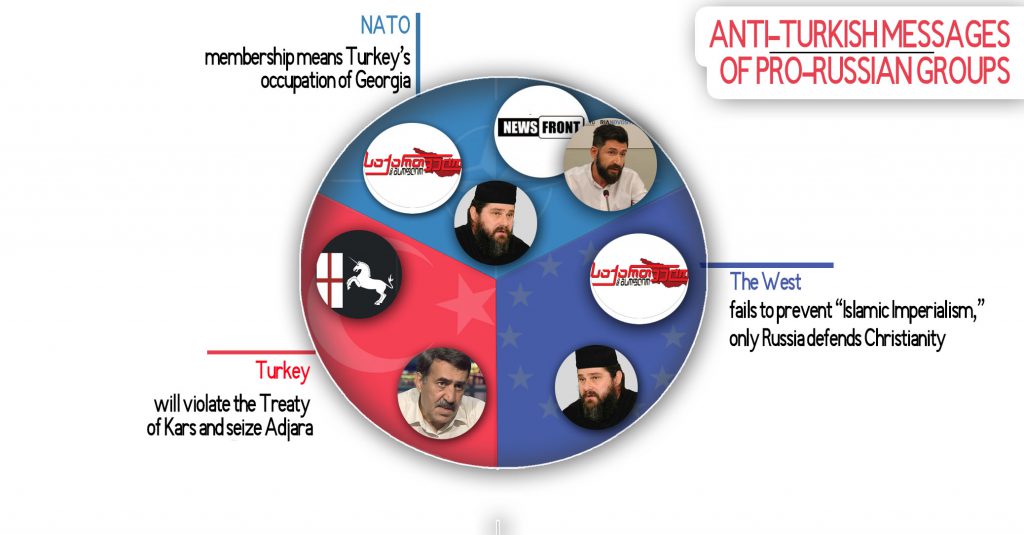 Pro-Russian actors have intensified anti-Turkish sentiments in the period of July 9-15. Various narratives related to Turkey, among them those about the Treaty of Kars, Adjara region, NATO membership and returning a mosque status to Hagia Sophia were voiced by some respondents and journalists of pro-Kremlin media outlets, News Front Georgia and Georgia and World. These actors were reiterating old myths about Turkey. The Myth Detector divided the spread messages into three main narratives:

According to the article published by Georgia and World on July 11, Turkey is cooperating with the United States and NATO to expand its own territories. The media outlet claims that Georgia’s NATO integration aspirations are dangerous for the country, because the United States will leave Turkey as Georgia’s “guardian.”

Shota Apkhaidze, founder of the Caucasus Center for Islamic Studies and editor of News Front Georgia, promotes the same narrative in the interview with News Front Georgia published by Georgia and World on July 11. Apkhaidze claims that Turkish President Recep Tayyip Erdoğan intends to annex Adjara, trying to do it “under the cover of NATO.”

In the interview with Georgia and World on July 15, Giorgi Razmadze, leader of Avchala St. Ketevan Martyr’s Church, is inciting mistrust towards NATO, saying that if Georgia joins NATO, the bloc’s military bases will be deployed in the country and Turkey’s imperial intentions will be realized.

Such manipulative messages are frequently used to incite anti-Turkish sentiments. In fact, NATO membership does not imply granting additional rights to a NATO member state to enter the territory of another member state. This is not the fundamental operating principle of the alliance. Respect and protection of freedom and sovereignty of member states represent NATO’s core values.

Military actions, troop movements and sending military forces under NATO command to other states are regulated by strict rules and aimed at protecting NATO member states or carrying out peacekeeping operations. NATO military capabilities are used for defensive purposes only – to protect a member-state in case of a threat to its sovereignty. After the Baltic States joined NATO, the Alliance launched air patrols at their request to protect the air space of these countries. This decision was made on the ground that the Baltic States did not have their own air defense systems. This operation implies 24-hour patrol of the Baltic air space by NATO aircrafts. Different NATO countries are taking part in this operation on a rotation basis. Any claims that Turkish troops will be deployed in Georgia and a threat of occupation will emerge once the country joins NATO aim at sowing fear towards a neighboring country and inciting mistrust towards the West.

Facebook page “Georgian March – Kutaisi” wrote on July 9 that Turkey plans to seize Adjara. According to the Facebook post, information as if the validity of the Treaty of Kars will expire in 2021 is a myth. The author, however, notes that Turkey poses a threat to Georgia’s territorial integrity and the country may lose Adjara. 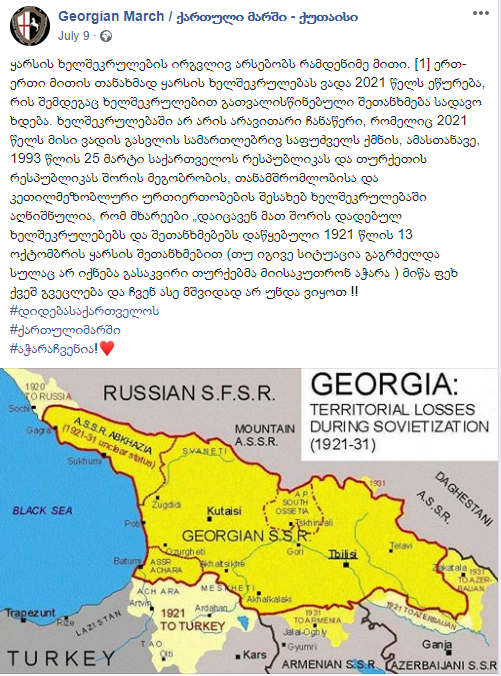 Vladimir Khomeriki, head of the Foundation for Russian and Georgian Peoples’ Unity, spoke about the Treaty of Kars and Turkey’s possible occupation of Adjara in the interview with Asaval-Dasavali published by the Georgian tabloid in its July 13-19 issue. The Myth Detector published an article related to Khomeriki’s statement on July 15.

The myth as if the Treaty of Kars expires in 2021 and Russia will no longer guarantee Georgia’s territorial integrity has long been circulating. The treaty, whose original text is available online, does not contain a provision that would create any legal base for its expiration in 2021. In addition, the agreement on friendship, cooperation and good neighborly relations between the Republic of Georgia and the Republic of Turkey signed on March 25, 1993 reads that the parties “shall observe the treaties and agreements signed by them, among others the October 13, 1921 Treaty of Kars.”

The issue of returning the mosque status to the ancient monument of Hagia Sophia was also used for spreading anti-Turkish narratives. In the interview with Georgia and World on July 15, Georgian cleric Giorgi Razmadze assessed Turkey’s proposal on returning the mosque status to Hagia Sophia, slamming it as “demonstration of cultural and religious dominance” and noting that despite strong criticism voiced by leading Western countries, Turkey did not take the interests of Christian countries into consideration.

Moreover, in the article published by Georgia and World on July 15, Davit Mkheidze, the author, claims that although Turkey neglected the West in connection with Hagia Sophia, it showed respect to Russian President Vladimir Putin and promised to open the monument to all visitors. According to Mkheidze, it once again emphasizes the fact that Russia is the only country that defends Christianity.