What was Burned near Al-Aqsa Mosque and What is Actually Happening in Israel and Gaza? 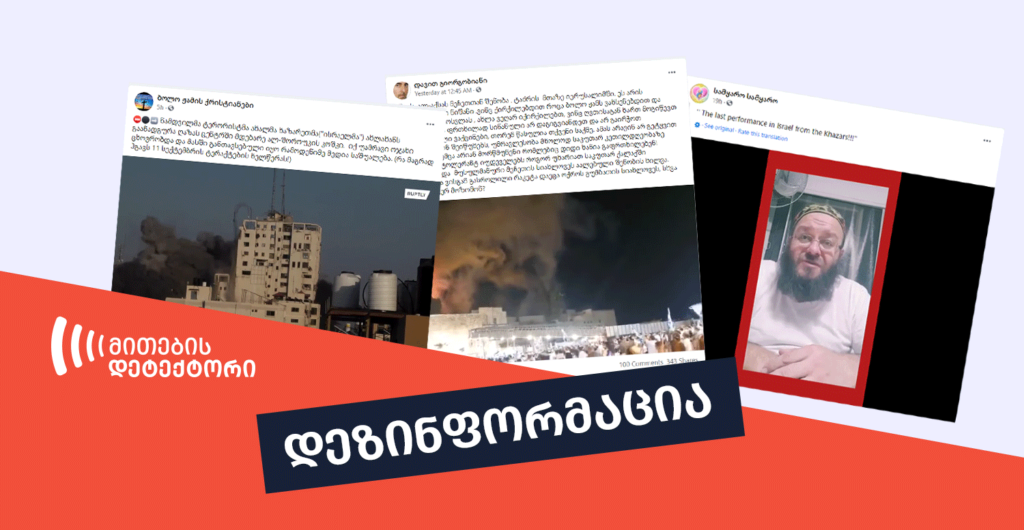 On May 12, Davit Giorgobiani, host of “ხარისხის არხი” (Quality Channel), published a post, claiming that a building is burning near Al-Aqsa Mosque that is a sign of the apocalypse. Giorgobiani writes that “Jews are happy to see a burning building near a shelled Muslim mosque in their city.” The post is accompanied by a video showing a smoke near the mosque as well as people gathered on the square, who are holding Israeli flags. In his post, Giorgobiani asks a question: “It is interesting who fired a rocket that hit the place near the golden dome,” claiming that the fire was caused by a rocket. In the same post, Giorgobiani warns the population not to receive “radioactive vaccines.” 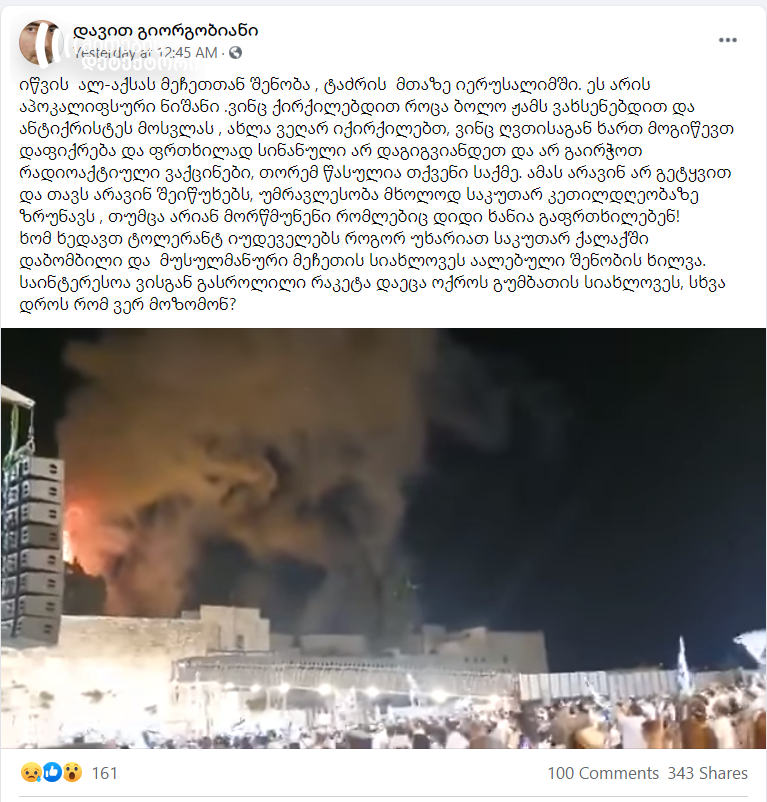 On May 13, Facebook account “ბოლო ჟამის ქრისტიანები” (End Time Christians) uploaded a video, showing the demolition of a multistory building hit by Israeli rockets in the Gaza Strip. The author of the post accuses Israel of terrorism, claiming that the building housed a lot of families and several media outlets. 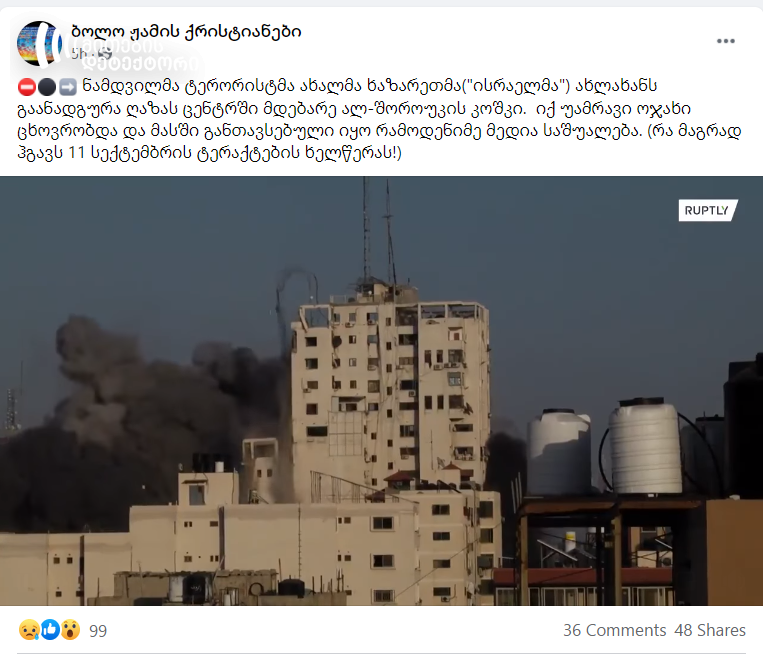 On May 12, Facebook user Dato Salukvadze published a post, saying that the current developments in Israel are claimed to be “terrorist acts,” but in fact, it is “a huge religious reset” aimed at promoting the emergence and reign of new world leaders. Later the same day, Facebook account “სამყარო სამყარო” posted a Russian-language video, according to which everything is a show and the Israeli government, not Hamas, is behind the attacks. 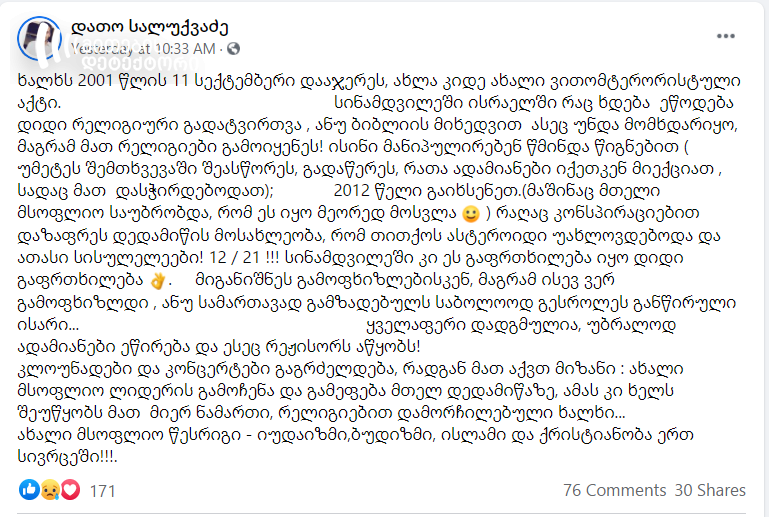 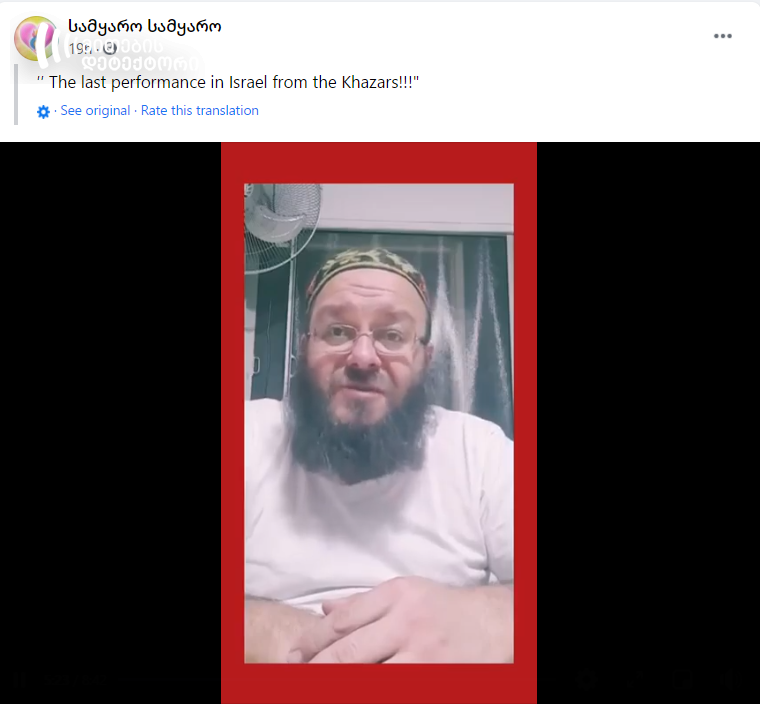 Davit Giorgobiani’s post contains several pieces of disinformation. No building was burned near Al-Aqsa Mosque. Instead, a tree was burning and fire was quickly extinguished. The fire was not caused by airstrikes. People had gathered on the square to mark Jerusalem Day. Moreover, vaccines do not contain radioactive substances. The post about the demolition of a multistory building in the Gaza Strip, where Israel is accused of terrorism, has been spread without context and it says nothing about the fact that the population had been warned about airstrikes, whereas the media outlet located in the building is affiliated with Hamas. The information spread by Dato Salukvadze and “სამყარო სამყარო” is not true and contains elements of a conspiracy theory.

The video spread by Davit Giorgobiani emerged on social media on May 11. Besides Jewish and Arabic posts, the video with a caption “Urgent! Al-Aqsa wrapped in fire” was uploaded on YouTube by Russian activist Ruslan Kurbanov. However, the first part of the video shows that a tree is burning. This fragment is not included in the video spread by Giorgobiani.

A tree caught fire outside Jerusalem’s Al Aqsa mosque on Monday, May 10, but the blaze was quickly put out and no damage was caused to the mosque.

The fire was not caused by a rocket, as claimed by Giorgobiani in his post. Witnesses offered contradicting accounts about whether the flames were caused by Palestinians who had thrown fireworks at police or by a police stun grenade. Israeli police said in a statement the fire was started by the fireworks.

Giorgobiani also claims in the post that “Jews are happy to see a burning building near a shelled Muslim mosque in their city.” In fact, the Jews featuring in the video were marking Jerusalem Day on May 10.

At the beginning of the Muslim holy month of Ramadan, Israel blocked off a popular gathering spot where Palestinians traditionally socialize at the end of their daylong fast. The move set off two weeks of clashes before Israel lifted the restrictions. But in recent days, clashes have resumed due to Israel’s threatened eviction of dozens of Palestinians in the Sheikh Jarrah neighborhood in east Jerusalem. Nahalat Shimon, a Jewish religious organization, is using a 1970 law to argue that the owners of the land before 1948 were Jewish families, and so the current Palestinian landowners should be evicted from the Sheikh Jarrah neighborhood and their properties given to Israeli Jews. The Palestinians are opposing the law, saying that it does not allow them to appeal for reclaiming their property. Although the trial was postponed, tensions culminated in clashes.

Israeli police deployed in large numbers as Muslim worshippers were holding evening prayers at the Al Aqsa mosque on May 7. It was unclear what sparked the violence, but videos circulating online showed worshippers throwing chairs, shoes and rocks at police, who fired stun grenades and rubber-coated bullets to disperse them. 136 people were wounded in clashes with police, including 83 who were hospitalized.

The Hamas militant group gave Israel an ultimatum to withdraw its security forces from Jerusalem’s Al-Aqsa mosque compound and the city’s Sheikh Jarrah neighborhood. When the deadline for the ultimatum expired, six rockets were fired from the Gaza Strip at Jerusalem. The Al-Quds brigades, the armed wing of the Islamic Jihad group, said it fired 30 rockets at Sderot, a city in the Southern District of Israel. The Israeli Defense Forces managed to repel the attack. In response, Israel started to attack Hamas military targets in Gaza.

Hamas gave Israel another ultimatum that again went unheeded. On May 10 and May 11, it fired dozens of rockets at Tel Aviv and other cities. More than 200 rockets were fired from the Gaza Strip. Most of them were destroyed by Israeli air defense system. More than 1,000 rockets have been fired from Gaza at Israel since May 11. Some of them fell on the territory of Israel causing casualties. Israel responded with airstrikes on the Gaza Strip. According to Israel Defense Forces, several key figures of Hamas intelligence were killed. According to latest data, recent escalations left 67 persons dead in Gaza, while 7 persons died in Israel.

As a result of Israel’s response attacks, two rockets fired at the Gaza Strip hit a 14-story building part of which was demolished. The building housed offices for Hamas’ Al-Aqsa satellite TV channel. Israel warned residents prior to shelling and called on them to evacuate the building.

In his Facebook post, Giorgobiani links the fire near the Al-Aqsa mosque in Jerusalem to the coming of the Antichrist and vaccines. Giorgobiani writes that vaccines are radioactive that is not true. The COVID-19 vaccines authorized by the World Health Organization do not contain radioactive substances.