What Lawsuit did Robert F. Kennedy Jr. Win and was Mandatory Vaccination Abolished in the U.S? 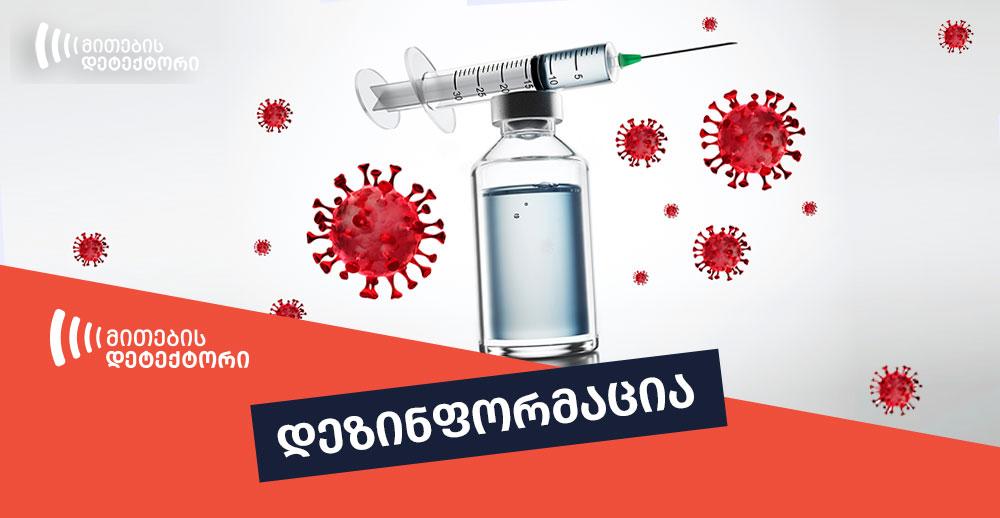 Social media users are still actively sharing the video uploaded by TV host Madona Koidze on August 14, 2020, in which Robert F. Kennedy Jr., an American anti-vaccine advocate and environmental lawyer, who is the nephew of former U.S. president John F. Kennedy, speaks about vaccines during an American talk show JONI Table Talk. Kennedy recollects failed attempts of creating vaccines against SARS-Cov, respiratory syncytial (sin-SISH-uhl) viruses and dengue fever, saying that vaccines against these diseases had caused “enhanced immune response.” He claims that the novel coronavirus vaccines may pose the same threat, noting that such doubts are further strengthened by the fact that Anthony Fauci, director of the U.S. National Institute of Allergy and Infectious Diseases, allowed vaccine manufacturers to skip animal trials and to go directly to human trials. 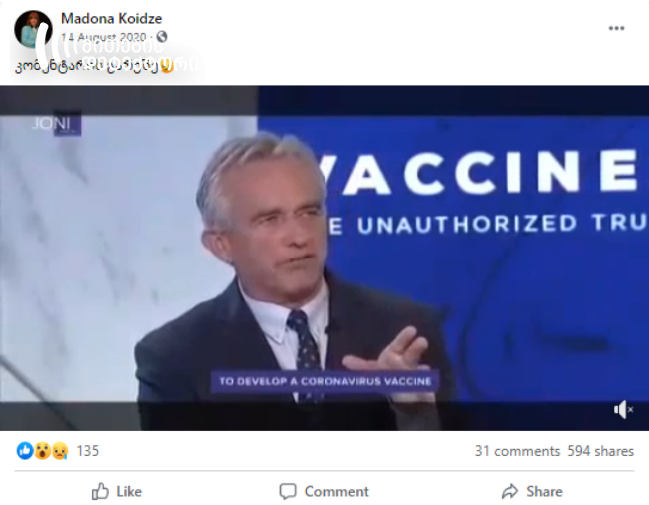 Madona Koidze’s post was again shared on April 7, 2021. Two Facebook users  Xatuna Mamacashvili and Baia Baiadze shared it with identical captions, reading that in 2017, the White House appointed Robert Kennedy as a chair of the commission to review vaccine safety and that he won a lawsuit against the U.S. Department of Health and Human Services (HHS) after he proved that no monitoring of vaccine safety had been conducted for over 32 years. 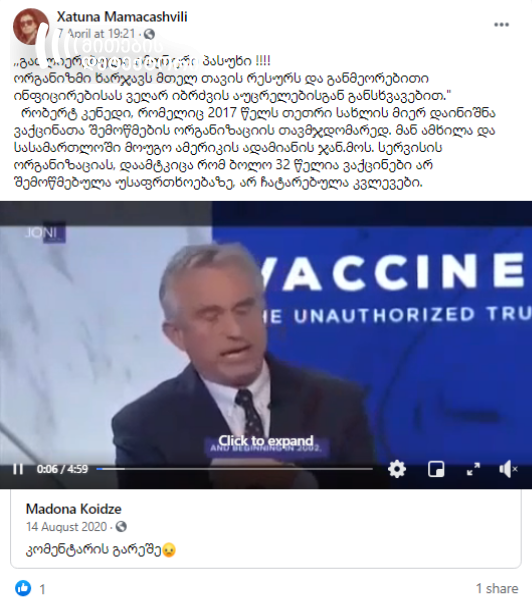 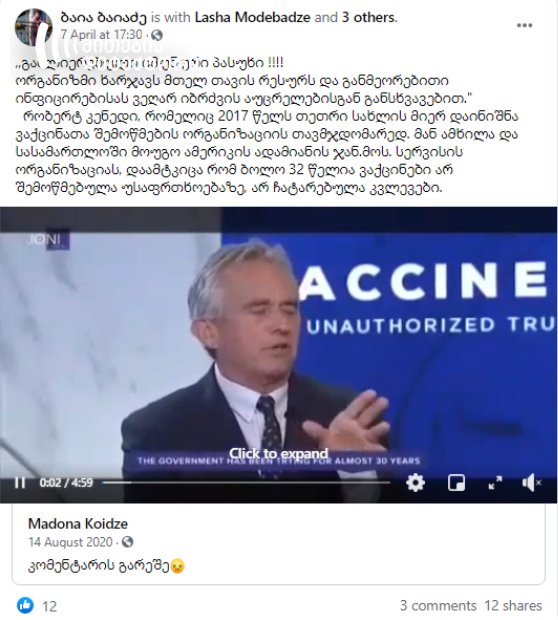 Davit Giorgobiani  and Georgian anti-vaccination doctor, Tina Topuria also spread the posts about Robert Kennedy allegedly winning the lawsuit on vaccination. According to Giorgobiani’s post, Bill Gates, Anthony Fauci and the pharmaceutical companies lost the lawsuit because they failed to prove that the vaccines used in the United States over past 32 years were safe and consequently, the U.S. Supreme Court abolished universal vaccination. Tina Topuria spreads identical information referring to the article published on 1scandal.com.

Kennedy’s claim as if the COVID-19 vaccines skipped animal trials is disinformation. An assumption that the coronavirus vaccines will cause “enhanced immune response” lacks scientific evidence. Kennedy’s lawsuit against the U.S. Department of Health and Human Services (HHS) was not about vaccine safety, but rather the Department’s failure to provide public information to an anti-vaccine organization. In addition, Bill Gates and Anthony Fauci had nothing to do with the court dispute. Neither did the court rule to abolish mandatory vaccination.

The New York District Court adopted its decision picked up by social media users in July 2018 after Robert F. Kennedy and Informed Consent Action Network (ICAN), an anti-vaccine organization, filed a lawsuit against the U.S. Department of Health and Human Services (HHS) for violating the Freedom of Information Act. According to the lawsuit, ICAN requested the U.S. Department of Health to provide the copies of vaccine safety reports, but failed to receive public information for several months. The same lawsuit notes that the National Vaccine Injury Compensation Program (NVICP) developed in 1986 requires HHS to submit biennial reports to two Congressional Committees detailing the improvements in vaccine safety made by HHS in the preceding two years. In response to ICAN’s request, HHS noted that it could not find the requested reports. Based on this official response received from HHS, ICAN claimed that the Department of Health has not conducted safety monitoring for over 30 years.

In an investigative article on April 28, 2019, journalist Jackie Kucinich found out what happened to the reports HHS did not provide. At a March 2019 hearing of the Senate Committee on Health, Education, Labor and Pensions, Chairman Lamar Alexander said the reports were actually required within two years of the law’s implementation, not every two years. And, Alexander said, the HELP Committee has two reports from the Department submitted to Congress in 1988, and in 1989. Both of these reports were made public at Senator Alexander’s request in 2019.

In the video spread on social media Kennedy speaks about the vaccines that caused an antibody-dependent enhancement (ADE) in the past, claiming that the COVID-19 vaccines pose the same threat. However, his claims lack scientific evidence. The antibody-dependent enhancement (ADE) is developed when a human initially suffers from mild symptoms, but in case of reinfection gets much sicker. ADE is typical for some respiratory viruses; therefore, theoretically, it is possible for SARS-Cov-2 to cause this disease. However, current empirical data about the virus and vaccines do not confirm that any approved COVID-19 vaccine will cause “enhanced immune response” or generally, COVID-19 has such effects on human bodies.

Kennedy echoes another popular disinformation about the coronavirus vaccines, according to which Anthony Fauci allowed vaccine manufacturers to skip animal trials and to go directly to human trials. In fact, the approved COVID-19 vaccines have passed through all phases of animal and human trials. Myth Detector wrote about it in its earlier articles:

Robert F. Kennedy Jr. is an American anti-vaccine advocate, conspiracy theorist, author, and environmental lawyer. In 2016, Kennedy founded Children’s Health Defense, an anti-vaccine and pseudoscience advocacy group, that may publish unverifiable information that is not always supported by evidence. According to the report released in January 2020, the organization founded by Kennedy accounted for 54% of anti-vaccine advertising content on Facebook. Robert Kennedy himself gained popularity among anti-vaccine groups by spreading disinformation and conspiracy theories about vaccines through his Facebook and Twitter accounts. According to the report released by the Center for Countering Digital Hate (CCDH) in March 2021, Kennedy is one of those 12 anti-vaccine influencers who regularly spread disinformation about vaccines and generate two thirds of anti-vaccination content on Facebook and Twitter.

Robert Kennedy told American media in 2017 that Donald Trump offered him the chairmanship of a commission that will examine “vaccination safety and scientific integrity” – something that triggered strong outcry from the scientific community, because Kennedy was voicing that scientists have repeatedly determined to be without merit. Despite his promise, Donald Trump abandoned the plan to set up the commission and even ceased talks with Kennedy on the issue.