What is the Synthia bacterium and how is it connected to the coronavirus? 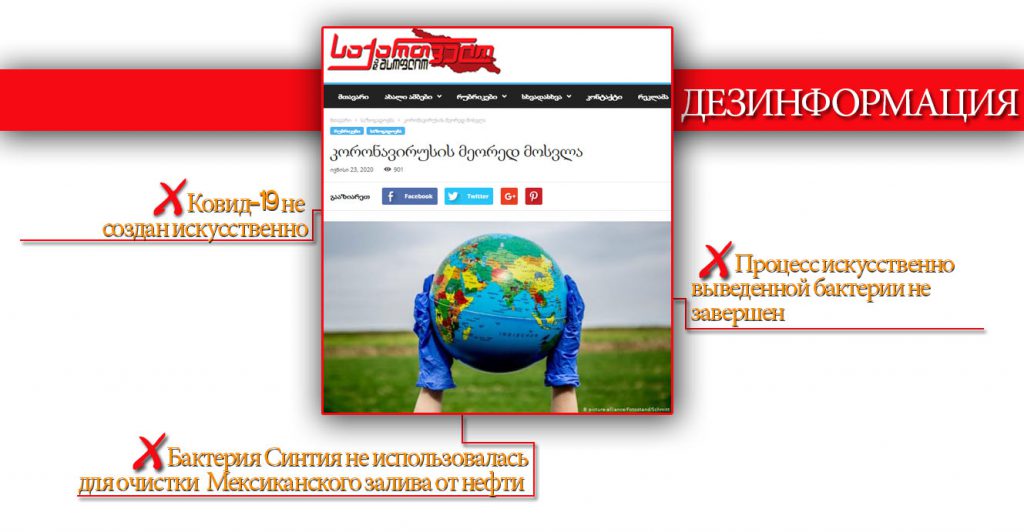 On June 23, Georgia and the World published an article titled “The Second Coming of the Coronavirus”. The article is mostly a translation of an interview of Andrey Karaulov, a Russian journalist, with Irina Ermakova, a biologist. It claims that the coronavirus pandemic is caused by a bacterium, created in the United States. According to Georgia and the World, the journalist and the respondent agree that genetically modified organisms (GMOs) cause viruses, including the coronavirus. Ermakova claims that Synthia, a synthetic genome, created by biotechnologists in the U.S. to clear the oil pollution in the Gulf of Mexico, is the most dangerous bacterium. The Russian scientists believes that Synthia began to infect animals and humans and that people die after consuming sea products – something she connects to the deaths from a bacterium in Florida. She also adds that a fish, infected with Synthia, ended up on Wuhan market. She believes that the coronavirus/COVID-19 includes unknown fragments and claims that the fusion of the coronavirus and the Synthia bacterium makes the new virus especially dangerous.

According to the World Health Organization, SARS-CoV-2, which caused COVID-19, formed in nature — namely, in bats. Genome of SARS-CoV-2 has already been studied. A virus from this group infected humans and cats in 2002. It does not contain unknown fragments and has been formed in the nature.

2. The process of the creation of the artificially created bacterium is not over yet.

What is the Synthia bacterium?

Scientists at J Craig Venter Institute (JCVI) in Maryland and California successfully reconstructed the genome of the bacterium and transplanted it into a synthetic DNA cell. Scientists had been working on this issue since 1995. The artificially created microbe was named Synthia. This fact was widely commented in the media as well as scientific community, as some believed the scientists created a living organism, while others considered this an overstatement. However, the process of synthetically creating a microbe is not over, as scientists face various difficulties. The pace of the development of the synthetic genetics is lower than expected. The potential of using the artificially created bacterium is quite broad — it can be used as a fuel, an ingredient of drugs/vaccines, and a means to fight pollution. However, this sphere is still at an early stage of development.

3. Synthia has not been used to clear oil out of the Gulf of Mexico.

In 2010, the Deepwater Horizon spill poured up to 200 million gallons of oil into the Gulf of Mexico, causing significant damage to the flora and fauna in the ocean. The so-called oil-eating bacteria live in various seas and oceans, feed on hydrocarbons, and especially spread in the places, where there is oil. An oil-eating bacterium – Alcanivorax borkumensis – played a major role in cleaning up the oil in the Gulf of Mexico after the 2010 spill, but it could not cope with the high amount of oil. Alcanivorax borkumensis is not an artificially created bacterium. After observing the outcome of its activities in the Gulf of Mexico, scientists began to thoroughly study it.

After unexpectedly finding an oil-eating bacterium in Challenger Deep in 2019, scientists came up with an idea to use the bacterium to clean up the oil in the Gulf of Mexico. Nevertheless, this has not been implemented yet.

4. Several death cases in Florida were not connected to Synthia, but rather with Vibrio vulnificus bacterium which has existed in the nature for a while.

Since 2017, cases of infection and death from a bacterium, Vibrio vulnificus, increased in Florida. Three people died in 2017, and five – in 2018. Humans can get infected with the bacterium by eating sea products or swimming with open wounds. It causes necrosis of body parts, which becomes fatal in certain cases. Scientists attribute the increase in the infection cases of this bacterium to the global warming – the increased temperature in the Gulf of Mexico facilitated the spread of Vibrio vulnificus in the places it has not inhabited before. Vibrio vulnificus has been known since 1970s and is not artificially created.