What Events does the Photo Display? – The Story of Discovering the Graves of Canadian Indigenous Children 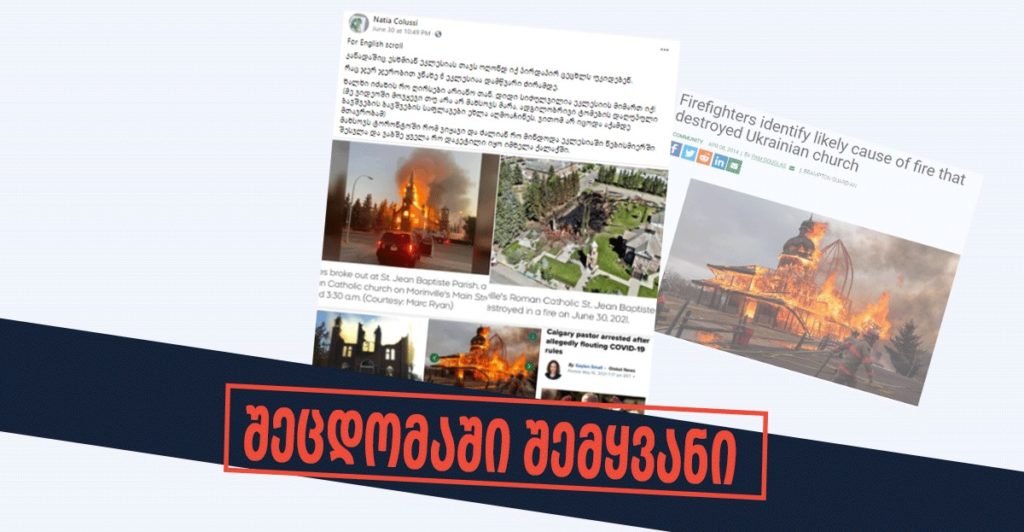 On June 30th, Facebook user Natia Colussi published a post, which includes pictures of burned Churches in Canada and a screenshot containing information about the arrest of Tim Stevens. The user claims that the Catholic Church is being attacked in Canada, stressing that “it would be good if we do not let the green and ecological liberalism win here as well.” As of July 12th, the post has accumulated 453 reactions and 442 shares.

On July 9th, Facebook user Ana Tchankotadze shared an image portraying a church covered in flames. The image is accompanied by the following caption: “What is happening now in Canada is a complete disaster. They have already started burning down the churches; some of them were shut down. Several priests who tried to perform the divine worship in open spaces have been imprisoned. They want to achieve the same in Georgia, but they will never succeed!” The image and the attached caption have appeared on social media after the forceful dissolution of Tbilisi Pride’s “March for Dignity” and create the impression as if the destruction of Churches in Canada and the imprisonment of the clerics is connected with similar events. As of July 12th, the post has accumulated 138 reactions and 237 shares. 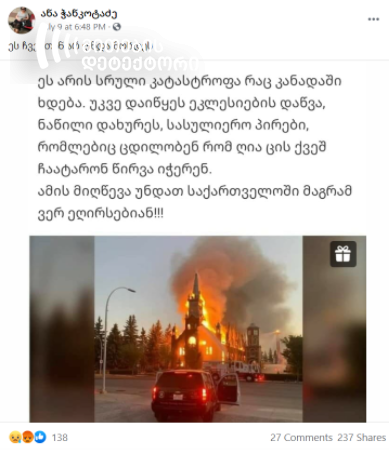 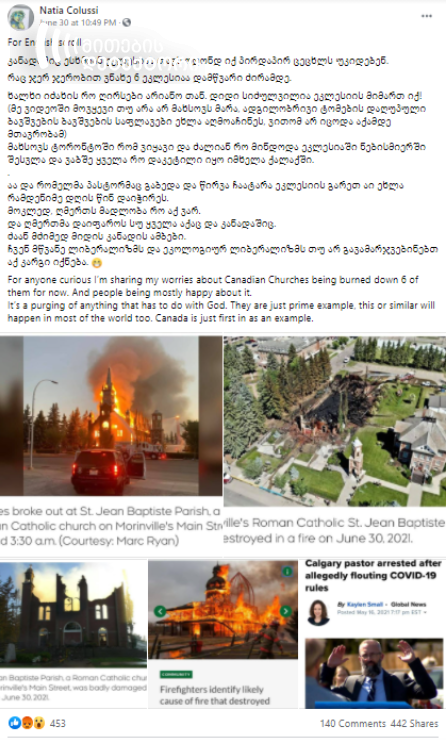 The image and the caption attached to it is being circulated without context and is misleading. Several churches have been indeed burned down in Canada, but the events only took place after the discovery of the mass graves in the territories where, in the previous century, the indigenous population was forcefully placed on the schools owned by the Catholic Church. As for the arrest of the clerics, several of them were indeed imprisoned in Canada this year; nonetheless, the reason behind it was the disobedience to the imposed COVID-related restrictions.

The widely-shared picture illustrates the June 30th fire in a Church near the town of Morinville.  The fire has destroyed the entire Church; however, the reasons behind the fire have yet not been detected. Apart from Morinville, several other Churches have been destroyed due to fire within the settlements of the indigenous Canadian population. The events only took place after the discovery of the mass-scale graves in June 2020. The graves were located in the territory, where the indigenous children were forcefully placed in the schools controlled by the Catholic Church. At the beginning of the last month, remains of more than 200 children have been found on the grounds of the former Kamloops Indian Residential School. At the end of June, at least 750 unmarked graves were found on the former Marieval Indian Residential School grounds. 182 unmarked graves have also been discovered within the territory of the residential school near the city of Cranbrook, B.C.

The burning down of the churches was addressed by the Similkameen Indigenous Canadian Council, stating that they understand the anger caused by the discovery of the mass graves discovered in these territories; nonetheless, they are also concerned about the destruction of the churches. They call upon the Canadian government to investigate territories around all of the former residential schools which contained the indigenous population against their will.

The First Nation’s Grand Chief has underscored the importance of protecting churches, as they might represent substantial evidence sites. He has offered the local government support in helping to protect the churches in the territory.

The first-ever residential school, where the indigenous Canadian population was held against its will, opened in 1828, while the last one was shut down in 1997. More than 130 similar establishments have existed, most of which were managed either by the Catholic Church or the federal government. The exact number of the victims is yet to be identified. The estimated number of victims varies between 3200 and 30000. According to the report of the Truth and Reconciliation Commission, sexual and physical violence was quite common in similar schools, which accommodated up to 150 000 children. Attending school was mandatory for the indigenous children. These schools were intentionally located far away from the Indian settlements, reducing the contact of children with their families to a minimum.

After discovering the mass graves, the Prime Minister of Canada, Justin Trudeau, has publicly apologized to the indigenous Canadians. He also mentioned that he discussed the issue with Pope Francis, who, according to Trudeau, has to apologize in the name of the Catholic Church. The Canadian Conference of Catholic Bishops was planning to lead the reconciliation meeting between the pope and the indigenous population. Nonetheless, due to the coronavirus, the meeting has been delayed until the end of 2021.

As for the arrest of several clerics in Canada, several of them were indeed imprisoned in Canada this year; nonetheless, the reason behind it was the disobedience to the imposed COVID-related restrictions. In May 2021, Pastor Tim Stephens was arrested, who, for several months, has been encouraging his followers to disobey the imposed COVID-restrictions and assemble in public spaces. Due to violating the restriction regarding the assembly, the pastor has been fined before as well. In addition, Pastors James Coates, Artur Pawlowski and his brother have been arrested for a similar reason.

Therefore, connecting the images of burned churches and imprisoned clerics with Tbilisi Pride or with Ecological/Green Liberalism and claiming that the same is being desired for Georgia is manipulative.

One of the images included in Natia Colussi’s post displays the burning of the Ukrainian Church in Canada in 2014, which had nothing to do with the latest events. The investigation has determined that the fire was caused because of an accident. 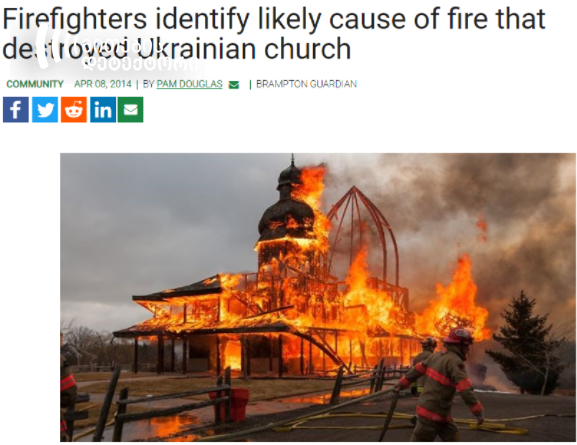