What does Gates Plan Mean and Who is Behind Disinformation about Risks of RNA Vaccine? 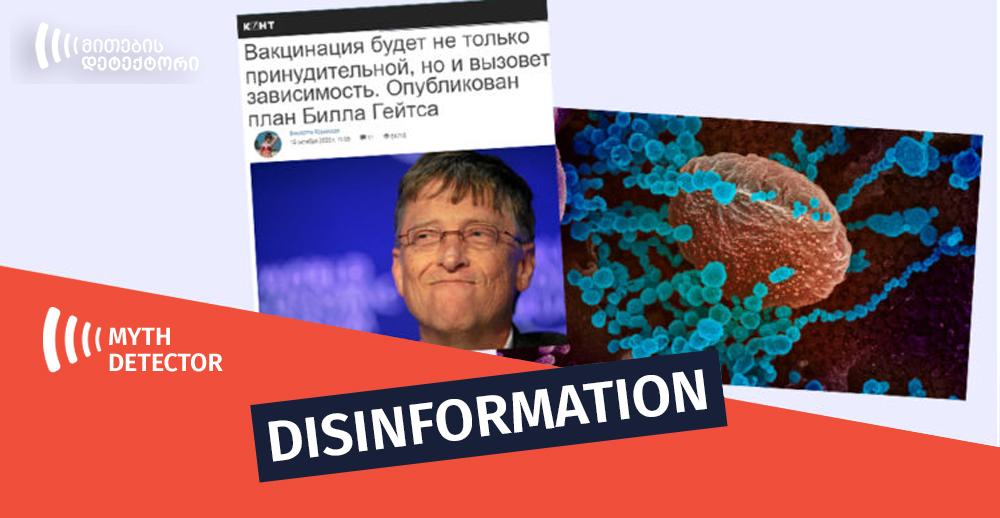 On November 1, 2020, Shore Shanidze, an anti-vax activist, published a lengthy post on her Facebook page headlined “Enemy’s Plans.” The post claims that The New England Journal of Medicine (NEJM), a prestigious medical journal, has published a plan developed by Bill Gates on carrying out mandatory vaccination and establishing total control over the world population. According to the plan, as claimed by Shore Shanidze, an RNA molecule experimental vaccine should be created “to reprogram” the immune system and make human body vaccine dependent. The post also claims that according to the same plan, vaccination will become mandatory, while vaccine rejection will lead to compulsory vaccination through use of force, restriction of the right to free movement or work. 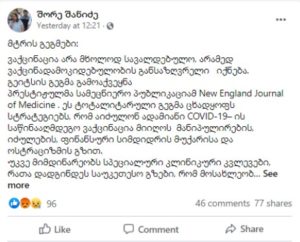 The information as if “the Gates Plan” on carrying out mandatory vaccination using experimental and dangerous coronavirus vaccine was published in the medical journal is not true. The journal really published an article by Bill Gates on February 28, 2020, but it covered the necessary steps to tackle the coronavirus pandemic and mainly contained recommendations. The claim that RNA-based vaccine will alter characteristics of human cells is nothing but disinformation. The post simply provides a translation of the Russian-language article, which was also shared to Georgian groups.

Disinformation No.1: The article by Bill Gates published in The New England Journal of Medicine (NEJM) is about the plan on mandatory vaccination.

შThe journal named in Shore Shanidze’s post published the article “Responding to Covid-19 — A Once-in-a-Century Pandemic?” by Bill Gates back on February 28, 2020. It, however, has nothing in common with the claims voiced in the post, according to which Gates plans to carry out mandatory vaccination throughout the world. In fact, the American business magnate talks about the novel coronavirus as an increasing threat and global challenge, which, in his opinion, may turn into the pandemic of the 21st century. Below are the key issues and recommendations from the article:

Since the outbreak of the coronavirus pandemic, Bill Gates has constantly been featuring in disinformation and conspiracy theories related to the coronavirus and vaccines. Below are Myth Detector’s earlier articles about the same issue:

Disinformation No.2: RNA-based experimental vaccine will alter characteristics of human cells and cause vaccine dependence.

Disinformation as if RNA and DNA-based vaccines will be especially dangerous for humans was spread on both Georgian and foreign social media pages. According to the spread disinformation, the vaccine will alter human DNA. In fact, when the scientists talk about the use of RNA molecule in vaccine development process, they mean not a patient’s RNA molecule but genetic material of a virus. The research shows that RNA is chemically different from DNA, making it virtually impossible for RNA to directly integrate into DNA to change a person’s genome. It is also a false opinion that such vaccine will infect humans, because in fact, not RNA of the virus, but the virus itself causes infection. The RNA injected in the body allows the body to produce antibodies against the genetic material of the virus, whereas RNA has a very short lifespan, being quickly degraded by cells after it has been used to make a protein. So, any claims that the RNA injection will cause long-term dependence among humans are not proven by the ongoing studies.

The U.S. National Institute of Allergy and Infectious Diseases (NIAID) and the biotech company Moderna, Inc. first started developing the RNA experimental vaccine in spring and this vaccine was one of the first to move to the phase of clinical trials. The RNA-based coronavirus vaccine advanced to clinical testing just two months after the virus was sequenced. Bill Gates is one of the active supporters of developing this technology. He, however, has never said in his statements and publications that this vaccine will change human DNA and cause vaccine dependence.

As of November 3, 2020, Shore Shanidze’s post has 76 shares. The post was spread in two groups: “კორონა მაფია” (Corona Mafia) and “კორონა აფიორა” (Corona Hoax). Its original source is the article posted on Russian website cont.ws and its content coincides with that of the Georgian post.  However, the post highlights the key claims voiced in the article more briefly. The article was published on October 19 by Violetta Krymskaya. 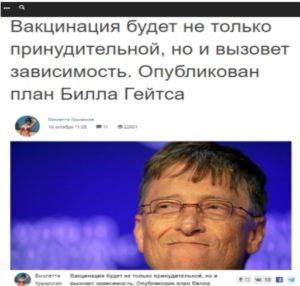 The article uses CrowdTangle data which is the leading content discovery and social monitoring platform.