What Could be the Motive behind the Assassination of the Haitian President and was Vaccination Prohibited in the Country? 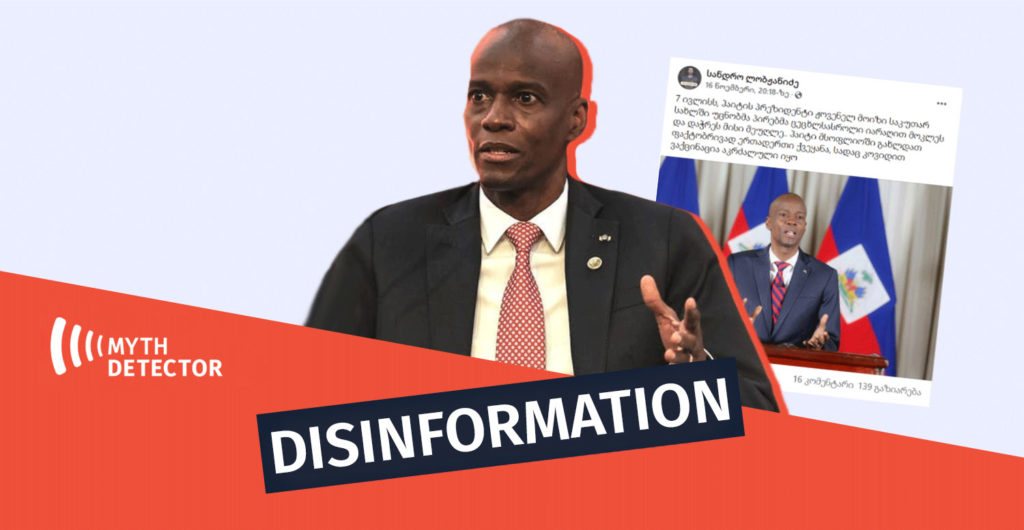 On November 16th, 2021, a Facebook user, Sandro Lobzhanidze, posted a photo of the ex-president of Haiti, stating that “On July 7th, the President of Haiti, Jovenel Moïse, was shot dead by unknown persons who also wounded his wife.” The author of the post also noted that Haiti was the only country where vaccination against Covid-19 was banned. 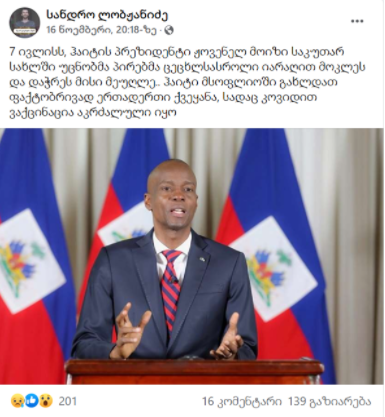 The post creates the false impression as if the Haitian President was assassinated because he banned vaccinations in the country. In fact, the investigation never named the ongoing vaccination process in the country among the possible motives for the murder of Jovenel Moïse.

What is known about the real reasons behind the Haitian President’s death?

According to the BBC, more than 40 people suspected of assassinating the President of Haiti have been arrested so far, although the real motive for the murder is still unknown. The then-Police Chief Leon Charles explained that one of the main suspects in the murder was a Haitian citizen, Christian Emmanuel Sanon, who was arrested shortly after the incident.

Charles argued that Sanon was driven by political motives and hired a group consisting of 2 Haitian nationals and 26 former Colombian soldiers, who were initially tasked with protecting Sanon. The suspects themselves said they did not know if the President’s assassination was planned, which the police chief did not rule out, suggesting that Sanon may have deceived them.

On February 7th, the day of the protests against the government and the President, Jovenel Moïse himself stated that they were attempts of his assassination and a coup d’état, which allegedly failed. As a result, more than 20 people were arrested, including a senior judge and a senior police officer.

Jovenel Moïse: “I thank every single person responsible for my safety in the palace. The dream of these people was to take my life. Thank God we did not witness this. Their plan failed.”

Noteworthy, the period in which Jovenel Moïse was in power was characterized by anxiety and resistance. His administration has been repeatedly accused of irresponsibility and corruption. An article in The Guardian states that according to a report by the US State Department, the Haitian government misappropriated more than 1 million USD and secretly utilized at least 34 million USD, which was given to the country in the form of aid to fight the pandemic.

The events around the anti-government rallies that started on February 7th were especially acute. A BBC article states that opponents accused Moïse of violating his own constitution since he did not intend to resign despite the expiration of his five-year rule. Activists also protested the noticeable increase in poverty and crime rates.

Was vaccination banned in Haiti?

According to a Bloomberg article, Haiti at the time was the only country in the Western Hemisphere that had not yet vaccinated any citizens against the virus due to the lack of vaccines. As part of its low- and middle-income assistance program, COVAX offered the AstraZeneca vaccine to Haiti free of charge, but the county government initially rejected the offer. The reasons specifically cited were the side effects typical to AstraZeneca and the public fears about the vaccine. Nonetheless, the Haitian government asked COVAX to replace AstraZeneca with an alternative.

The Haitian healthcare system also suffered from a shortage of necessary medical equipment and personnel. According to the BBC, one of the respiratory therapists in the country’s respiratory therapist in the capital, Port-au-Prince, claimed that the actual number of ventilators was actually closer to 40, and maybe 20 of those weren’t working. According to him, the number of medical staff who knew how to use the devices was minimal.

The Haitian government finally agreed to receive the vaccines from COVAX, albeit late, as the deadline for submitting the required documentation had already expired. In addition, due to production problems in India and the growing demand for the vaccine worldwide, the vaccine could no longer be delivered to Haiti.

Finally, the country received the first batch of 500,000 doses of Moderna vaccine from the US-funded COVAX platform on July 14th, when, if agreed in time, the vaccine was expected to be delivered by May.

Nonetheless, the vaccination rate in the country is still significantly low. Only 0.92% of the Haitian population is inoculated with at least one dose of the vaccine, while the share of fully vaccinated is 0.43%. According to a report submitted to the World Health Organization (WHO), 24,710 cases of infection and 711 deaths have been confirmed in Haiti between January 3, 2020, and November 19, 2021, when the country has a population of over 11 million. It is believed that, in reality, the number of cases is much higher, which is explained by insufficient testing.

The above-discussed information makes it clear that Haiti did not ban vaccination, but the existing political, economic and social situation did not allow the country to start vaccination, which delayed the process.

Noteworthy, similar manipulative information was disseminated on social networks earlier as well, when the death of the President of Tanzania, John Magufuli, was linked to his statements about the pandemic. Magulfuli did not recognize the pandemic as a real threat and unreasonably argued that the Covid-19 tests were faulty. According to official reports, he died of a heart attack, and according to the opposition, President passed out due to Covid-19. Read the “Myth Detector” article for more: