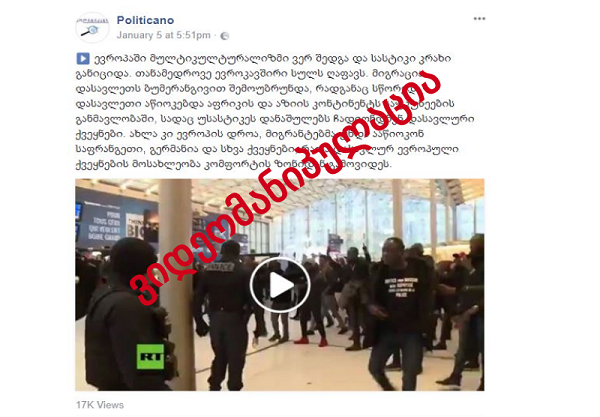 On January 5, 2018, Facebook news-portal ‘Politicano’ uploaded a video released by German-language Russia Today, showing a demonstration organised by people of colour being dispersed by the police. The video is accompanied by an editorial caption from Politicano stating that migration have returned to haunt the West like a boomerang and now it’s time for migrants to ravage European countries. Politicano’s assessment creates a perception that the people depicted in the footage who have an aggressive attitude towards the police are migrants. A flow of racist comments and reactions was induced by the video inside its viewership.

Politicano: “Multiculturalism in Europe could not be achieved and the notion itself failed miserably. The EU in its modern guise is on the deathbed. The migratory programs of the West came back like boomerang to hit them in the face, as the West pillaged the African and Asian continents for centuries, where numerous atrocious crimes were committed by Westerners. Now it’s time for European countries, migrants have to plunder France, Germany and other countries to force their population to come out of their comfort zone.”

The posting of the video by Politicano is manipulative because it does not concern the issue of migrants, but the abuse of power by the police. The video was shot on one of Paris’ Railway Stations on December 3, 2017, where people protested against the use of unnecessary force by the police on a Spaniard of Cameroonian origin.

The primary source of the video published by Policano is RT Deutsch, who posted the same footage on its website on December 4, 2017, with a racist headline: “In Paris, the police used tear gas on dozens of colored protesters inside the premises of a railway station” (Eskalation in Paris: Polizei setzt Tränengas gegen Dutzende farbige Protestler an Bahnhof ein).

According to the article by RT, the rally participants accused the police of killing a Cameroonian Spaniard, who fell into a coma after police detained him on November 9 and died two weeks later. In the feature written by RT, which is the main source for Politicano’s post, there is no mention of migrants or their problems.

The same information was distributed by various French media outlets such as leparisien, lepoint and 20 minutes. According to their information, on November 9, 2017, Spainard Massar D. was arrested by the French authorities at a Paris railway station on the grounds of drug dealing where he tried to flee the scene. After his re-arrest Massar D. fell into a coma and died two weeks later.

To protest against this fact, the movement “Anti-Negrophobe Brigade” planned a protest rally at the same railway station in Paris, where the protesters accused the police of abuse of force against Massar D. and recalled similar incidents from the past. The French police raided the manifestation with tear gas, after which the demonstration continued outside of the building.

The video footage from RT, as well as the video footage from the French freelancing journalism portal shot by the reporter Clément Lanot, shows that rally participants wear the same t-shirts with the inscription “Justice for Massar, who was killed in the hands of the police from asphyxiation”. In social networks, a campaign has begun with slogan “Justice for Massar”. Consequently, the captioning of the video done by Politicano, as the footage depicting migrants in it, is wrong and has as goal to incite racist and xenophobic sentiments.