Vaccination or regulations – What was the protest rally in Berlin all about? 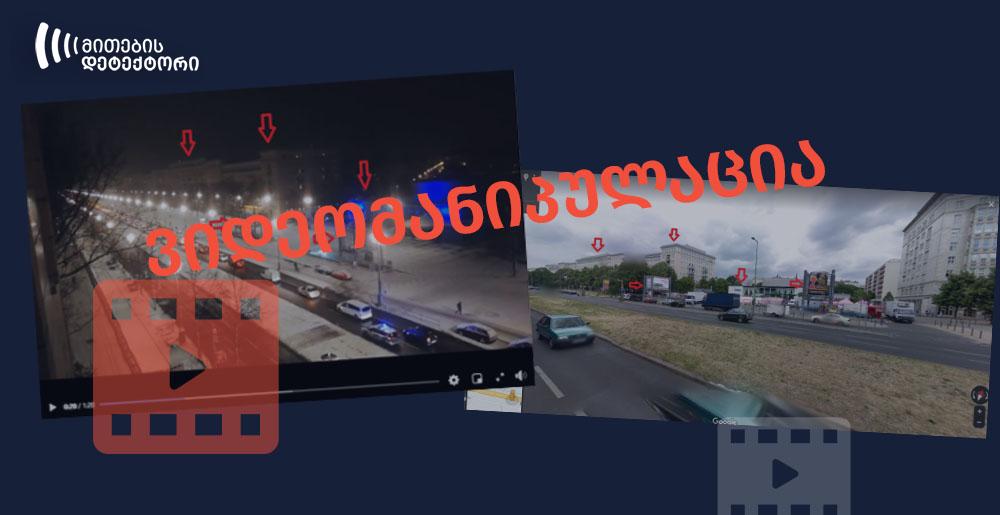 On February 14, Facebook profile “სულიერი სამყარო” (Spiritual World) published a video, which, as the page claims, depicts the 5 km-long convoys of cars of anti-vaccination protesters. 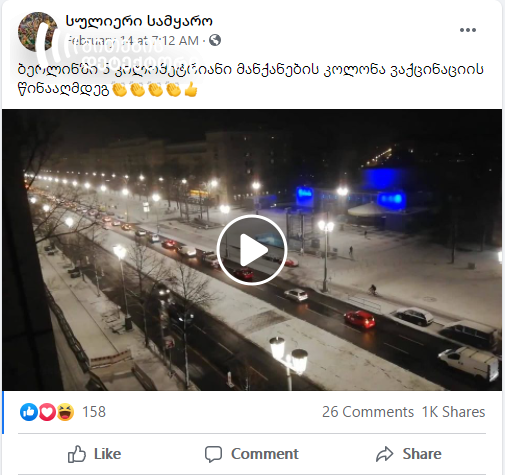 video published by the “Spiritual World” is a manipulation. In Berlin and other cities of Germany, the march of cars did take place several times in January and the beginning of February, however, protesters marched against COVID-19-related restrictions and not the vaccine.

Video footage identical to the one published by the “Spiritual World” was published on Youtube by the user Micha Krause on February 5, 2021. Video had the following title: “Convey of cars Anti-corona-restrictions demonstration, Berlin, 5.2.2021” (In German: Autokorso Anti-Corona-Maßnahmen Demo Berlin 5.2.2021). 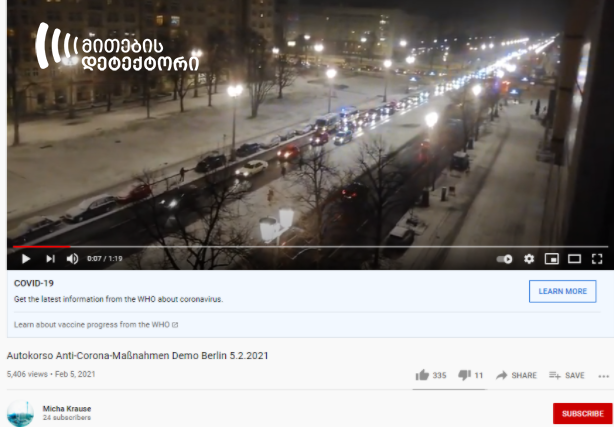 On February 13, the same user published the 12:37 minute-long video with similar content, whose description also reads that it depicts an anti-corona restrictions demonstration held on February 12.

With the InVID program and Geolocation, it was determined that the video was taken on Karl Marx Avenue in Berlin. 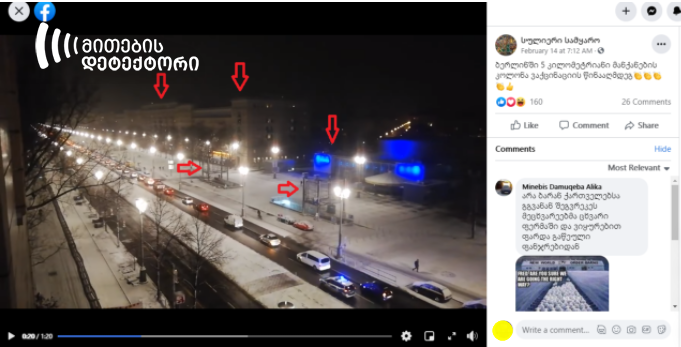 Screengrab from the video published by the “Spiritual World”

Protest rallies against coronavirus-related restrictions have been held in Berlin periodically since the summer, 2020. One of such protest rallies was held in Berlin on January 31 starting with the pedestrian march and later turning into convey of cars. Besides Berlin, such protest marches were held in other cities of Germany for example, on February 6, convey of cars was held in Mannheim and Senftenberg. Protests primarily demanded the lifting of COVID-19 restrictions in these cases as well.

The organizer behind the rallies in Berlin as well as other cities is the group Querdenken 711.

Querdenken 711 call themselves the freedom initiative or movement, which is an unregistered union. On August 29, Stuttgart IT company founder and director Michael Ballweg registered the first demonstration known as Querdenken in Berlin. On January 27, 2021, Michael Ballweg, via a video message, called on Querdenken supporters for the new form of protest – car parades.

There are anti-vaxxers and conspiracy theorists among the movement, however, Querdenken’s goal is to restore currently partly restricted basic human rights. “We insist on the first 20 articles of our constitution” – reads their manifesto. It is followed by the 9 basic rights including freedom of expression, assembly, and movement. Therefore, their goal is primarily about lifting restrictions imposed because of coronavirus

The Bavarian State Government sees Querdenken 711 as an “extremely heterogeneous” movement: in terms of content, it ranges from citizens who want to point out the importance of the basic right to assembly, fanatical opponents of vaccination, general skeptics of the state, and conspiracy theorists.

What restrictions are imposed in Germany?

As of February 10, the following restrictions are imposed in Germany: