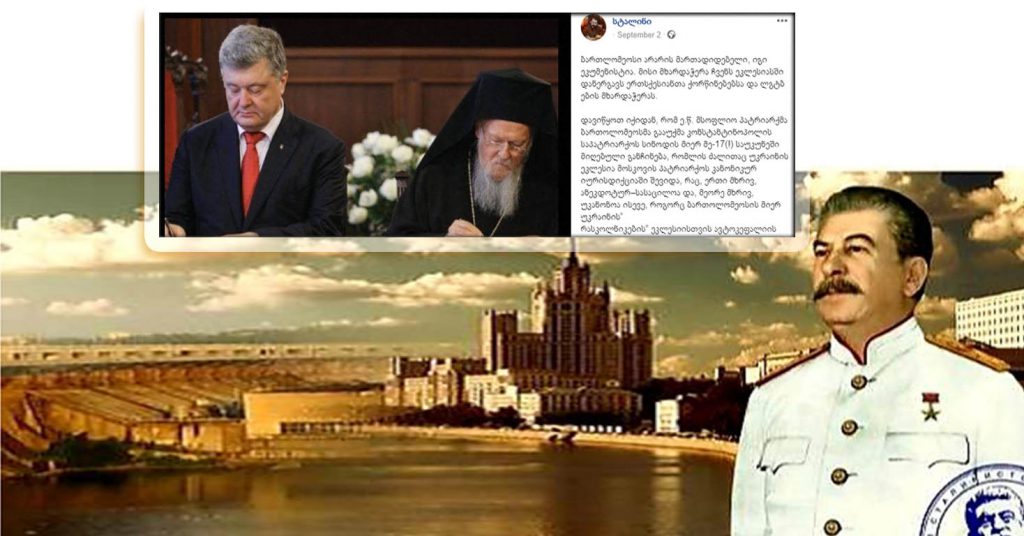 On September 2-3, 2019, a Facebook page “Stalin” released a number of manipulative posts containing false reports about the developments around the Ecumenical Patriarchate of Constantinople. Some posts represented extracts from the articles released by online newspaper Georgia and World. The main purpose of the Facebook page was to discredit Ecumenical Patriarch Bartholomew of Constantinople. 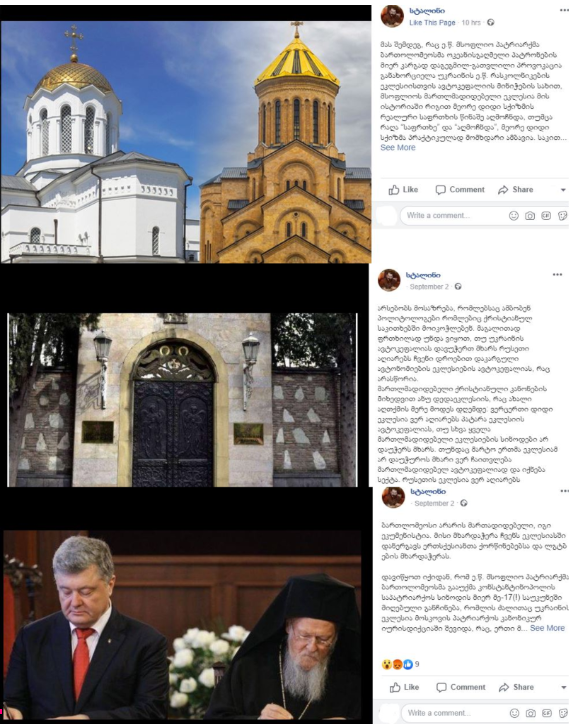 Myth No. 1: Ukrainian President Petro Poroshenko handed over USD 25 million to the Ecumenical Patriarch in exchange for a tomos of autocephaly

Fact No. 1: Information about bribing the Ecumenical Patriarch was spread by a journalist from RIA Novosti Ukraina 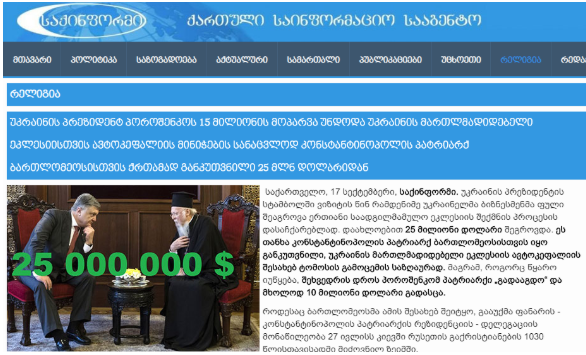 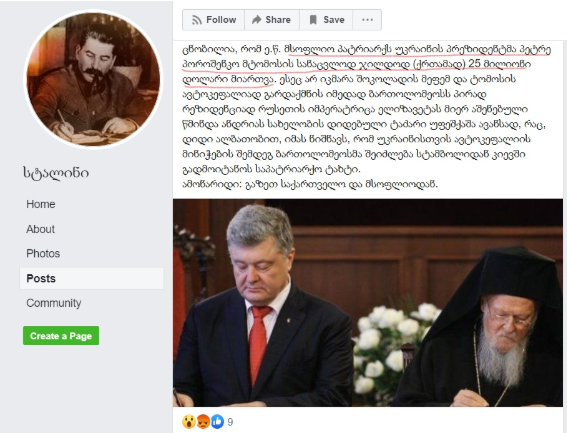 According to Ukrainian online edition Unian, the source of this “news piece” was the journalist of the notorious RIA Novosti Ukraina, who has been distributing pro-Russian propaganda on the Internet under the alias of Diana Mikhailova. It was her platform on Livejournal that initially started spinning the thing about “$25 million” with a nuance added that at least $15 million was “appropriated” by the Ukrainian president.

Later, the same report was spread in the Russian media. Russian media outlets reported that the Ukrainian side insulted Patriarch Bartholomew by stealing money that would pose a risk to receiving a tomos.

Diana Mikhailova’s name is also associated with the spread of other fake news related to Ukraine. In particular, in May 2018, RIA Novosti Ukraina and other propagandistic pages reported that the United States sold Ukraine defective Javelin anti-tank missiles. 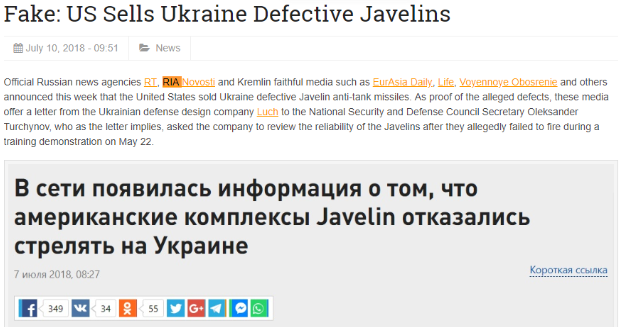 Myth No. 2: All churches have to support autocephaly to ensure its legitimacy

Fact No. 2: The Patriarchate of Constantinople or Ecclesia Matrix (Mother Church) has the full right to grant autocephaly to a subordinate church.

By claiming that all other churches should recognize the autocephaly to ensure its legitimacy, the Facebook page “Stalin” tries to portray Ukrainian church autocephaly as illegal.

Quotation: According to Orthodox Christian canons or Mother Church, originated since the New Testament, not a single big church will be able to recognize the autocephaly of a small church unless the synods of all other Orthodox churches support it.

According to Patriarch Athenagoras of Constantinople, specific canons exactly characterizing autocephaly are not to be found in ecclesiastical legislation. They are to be found clearly stamped in the canonical conscience of the Church and in its history, and have been repeatedly expressed, and are distinctly printed in the Tomes that were published on the occasions of the founding of the newer local Autocephalous Churches.

Ecumenical Patriarch Athenagoras sent a letter to Metropolitan Pimen in 1970 on this occasion, after Patriarchate of Moscow issued a Tomos of Autocephaly to its former archdiocese in North America, which was commonly known as the “Russian Metropolia.” According to the letter, Russia had no right to grant autocephaly in reference to a Church completely outside of its boundaries. 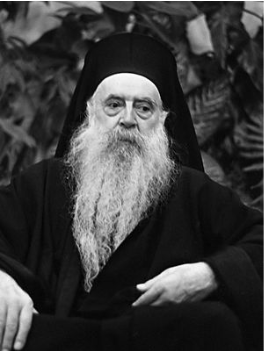 In the interview with Voice of America, Georgian theologian, Guram Lursmanashvili notes: “Only Mother Church or Ecumenical Patriarch of Constantinople have the right to grant autocephaly. The Ecumenical Patriarchate of Constantinople will not grant autocephaly to anyone, if the so called “Principle of Photios” is violated – i.e. ecclesiastical boundaries should coincide with secular boundaries.”

Thus, it is worth noting that in case of Ukraine, the Patriarch of Constantinople had the full right to grant autocephaly, because historically, just it represents the Mother Church. Russia has no such right in respect of Abkhazia, because from legal point of view, this territory belongs to the Georgian church; thus, its recognition would be equal to interference in the jurisdiction of another country that is banned by canon laws.

Myth No. 3: The Crete gathering was convened to legalize same-sex marriage.

Fact No. 3: The Crete gathering decided that same-sex marriage is not allowed.

According to the post released by the Facebook page “Stalin”, the Patriarch of Constantinople decided to convene the Crete gathering in 2016 in order to legalize same-sex marriage. The myth had been spread by Georgian media outlets even before the gathering was convened to promote negative public attitudes towards it.

Quotation: The purpose of this so called church gathering convened by the Ecumenical Patriarch of Constantinople that was held on the island of Crete in June 2016 was just to embody this idea (of the same-sex marriage). 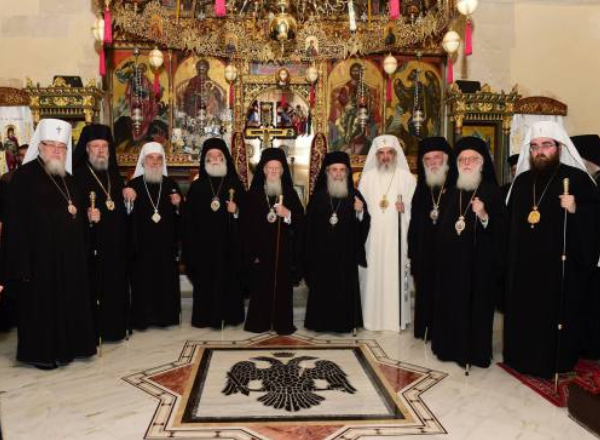 The Holy and Great Council gathering in Crete

After discussing this and other issues related to marriage, the Holy and Great Council of the Orthodox Church approved the document “The Sacrament of Marriage and Its Impediments.” The document provided answers to all questions related to the issue of marriage.

First of all, the document provides a definition of a family, as a unity of a woman and a man:

It is worth noting that the claims by the Facebook page “Stalin,” as if the Ecumenical Patriarch of Constantinople strived to legalize same-sex marriage, are false, because the gathering unanimously supported the marriage as a union between a man and a woman, without any exceptions.

“The Church does not allow for her members to contract same-sex unions or any other form of cohabitation apart from marriage. The Church exerts all possible pastoral efforts to help her members who enter into such unions understand the true meaning of repentance and love as blessed by the Church.”