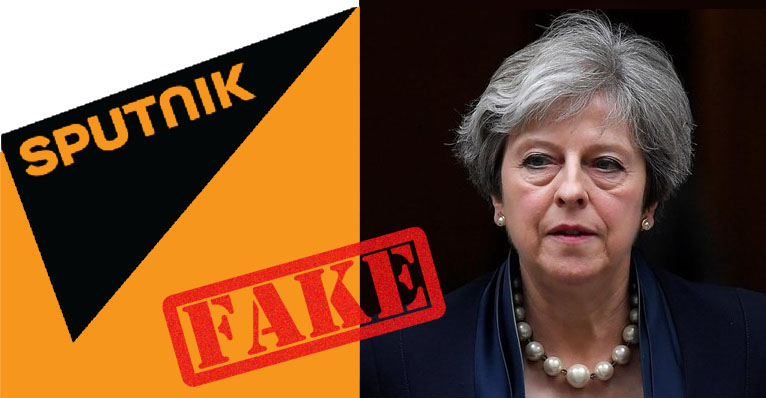 On February 7, 2019, Sputnik-Abkhazia released an article headlined “Scotland Yard about the third suspect in the Skripal case: the investigation continues.” According to Sputnik-Abkhazia, the Russian Foreign Ministry caught British Prime Minister Theresa May in a lie, because the Porton Down Laboratory denied that a nerve agent that poisoned Russian ex-spy, Sergei Skripal and his daughter, Yulia had been produced in Russia.

The claims by Sputnik-Abkhazia, as if Porton Down denied the fact that Novichok nerve agent had been produced in Russia is a lie, because Porton Down has not made any such statement and it only explained that creation of similar agents is probably only within the capabilities of a state actor.

The Porton Down Laboratory has never stated that a nerve agent that poisoned the Skripals had not been produced in Russia.

Chief Executive of Porton Down, Gary Aitkenhead said in the interview with Sky News on April 4, 2018 that “we were able to identify it as Novichok, to identify that it was a military-grade nerve agent. We have not verified the precise source, but we provided scientific information to the government, who have them used number of other sources to piece together the conclusions that they have come to.” He noted that “Novichok is a military-grade nerve agent, which requires extremely sophisticated methods in order to create – something that’s probably only within the capabilities of a state actor.”

Making any conclusion about the origin of a poison goes beyond the competence and capabilities of Porton Down, because it is only involved in scientific research; the above issue is within the competence of intelligence.

British Prime Minister Theresa May said that the assessment from Porton Down was “only one part of the intelligence picture”. The conclusion on the Russian origin of Novichok was made based on the information provided by intelligence and other sources.

Russian ex-spy, Sergei Skripal and his daughter, Yulia were poisoned with Novichok nerve agent in the city of Salisbury on March 4, 2018. British police accused two Russian citizens, who later appeared GRU agents, of poisoning Sergei and Yulia Skripal. The United States and the European Union imposed sanctions against Russia for using a chemical weapon.