Six Messages on Buknari Events That Incite Hatred Towards Muslims 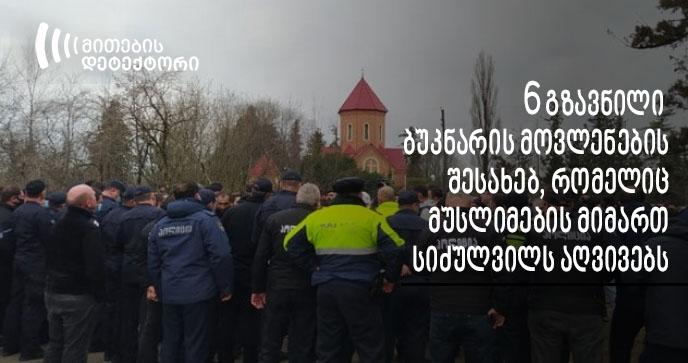 A conflict between local Muslims and Christians in Buknari village, Chokhatauri Municipality, connected to setting up a praying space in a private house, grew into a physical confrontation on January 12-13. On January 14, non-governmental organizations disseminated a statement related to the Buknari incident, mentioning that the right of the Muslim community to set up a praying space and conduct worship in private property is protected by constitution and the state should ensure it.

Against this background, various media outlets and politicians were shifting the focus from religious freedom of the citizens of Georgia to manipulations and discreditation campaigns and were trying to connect the case with special services or political powers of foreign countries. Anti-liberal actors were also connecting the events to radical, terrorist groups – presenting Muslims and Islam as aggressive, thereby demonizing Muslim citizens and facilitating the incitement of hostility on religious grounds.

Message 1. Radical, terrorism-associated groups were trying to escalate the situation.

Anti-liberal and pro-governmental POS-TV and Prime Time, as well as several online editions were connecting Buknari events with radical groups and terrorism. Several news outlets disseminated materials with identical title and content, underlining the role of Piruz Tsulukidze in the unfolded events. Tsulukidze was associated with terrorism by the news outlets due to his alleged ties with Ahmed Chataev in the past. These media were trying to create a perception that radical groups were escalating the situation in Buknari.

Message 2. Buknari events are a provocation by Turkey.

Apart from terrorism, Buknari events, that is – the religious right of Georgian Muslims – were connected to neighboring Turkey. The narrative, according to which the confrontation is being directed from abroad, referred to Turkey. Ultranationalist actors, the Leader and a supporter of the Georgian March – Sandro Bregadze and Davit Nemsadze, respectively, as well as Nikoloz Mzhavanadze and the Leader of the Labor Party of Georgia Shalva Natelashvili were all pointing at Turkey’s role in Buknari events.

Message 3. Buknari events are connected to the Treaty of Kars.

In an article by Georgia and the World, Soso Tsintsadze, a respondent, and the journalist connect Buknari events to the Treaty of Kars. The conspiracy about the Treaty of Kars has been trying to showcase Turkey as a threat to the territorial integrity of Georgia, claiming that the Treaty, signed by Turkey and the Soviet Socialist Republics of Transcaucasia on October 13, 1921 and returning Adjara from the Ottoman Empire to Georgia, expires in 2021. The expiration of the Treaty would mean that Adjara should be returned to Turkey, and Russia would not be able to protect Georgia from Turkey anymore.

Connecting Buknari events to the Treaty of Kars is indirectly emphasizing the role and interests of Turkey in this process.

Message 4. Muslims are aggressive and pose a threat.

Hosts of an Alt-Info program were showcasing Georgian Muslims participating in Buknari events as aggressors and as a threat. They were assessing the incident as their “attack” on Christians and labelling them with hate epithets (“pigs”, “an alliance of Islamists and gay-queer-transgenders”). Moreover, a Facebook page „ქართული გვერდი“ (Georgian page) published a manipulative post about Buknari events which was later deleted. In the video included in the post, a Buknari local was talking about a threat from a Muslim – something that the post generalized on all Muslims. Alt-Info also aired this video.

Message 6. United National Movement and Gülen-funded forces are behind the Buknari events.

Sandro Bregadze, the leader of Georgian March, Alt-Info, as well as Mamuka Areshidze (on air at TV Obiektivi) claimed that the United National Movement – which they claim is funded by Gülen – provoked the escalation of the processes in Buknari. Fethullah Gülen is a Turkish religious scholar, living in the United States, who has a lot of supporters in Turkey. He was accused by Recep Tayyip Erdoğan of attempting a coup d’état in 2016.