Russian Propaganda During and After the August 2008 War 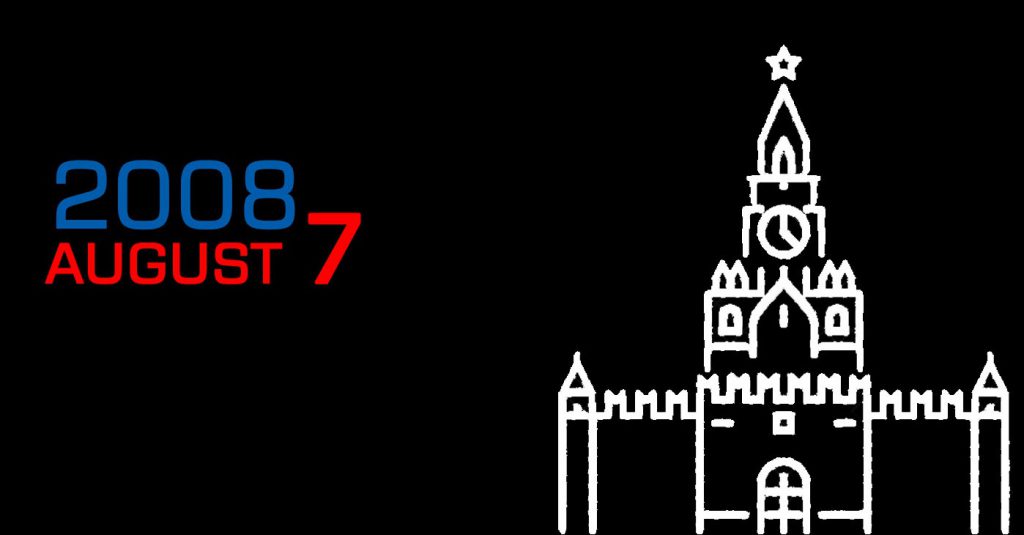 August 7, 2018 marks ten years after Russia’s military intervention in Georgia in 2008. The Kremlin propaganda is part of the military intervention as well as the hybrid warfare manifested in Ukraine and other countries following the occupation of 20% of Georgian territories in 2008. Our review provides information about how Russian propaganda worked in August 2008 and through what messages the Kremlin tries to sow fear of resumption of the warfare in occupied Georgia, as well as to incite mistrust towards strategic partners.

Kremlin propaganda during the August war

To justify Moscow’s military aggression, on August 8, Russian media outlets started accusing Georgia of unleashing the war. Аргументы и Факты, Комсомольская Правда, НТВ , Russia Today and others disseminated news on how Georgia attacked the Tskhinvali region, razing the villages and the city of Tskhinvali to the ground. The Russian media outlets also claimed that Russian military aircrafts intruded into Georgia to stop bloodshed and ethnic cleansing of the South Ossetian population.

Russian media outlets did not accidentally choose August 8 as the date of mass dissemination of one and the same messages. Moscow claims that the hostilities were unleashed on August 8, saying Georgia was the first to launch the war and Russian troops entered into the Georgian territory only afterwards.

Russian media  questioned the images taken by Gleb Garanich of Reuters, depicting the Gori shelling on August 9. The targeted disinformation campaign was launched on August 10. Russian media outlets, Комсомольская Правда, Правда.ru, Вести.ru published materials that mentioned that, according to bloggers from a Russian social network LiveJournal, the footage of bombing of Gori is staged, whereas The Reuters has published fake photos.

The photo, shown below, depicting a resident of Gori with his deceased brother, was considered a fake by the bloggers of Russian social network LiveJournal and media outlets. According to them, the authenticity of the photo is questioned by the second photo, in which, as compared to the first photo, the deceased brother’s location and condition are changed.

According to the report released by the U.S. Intelligence Community in 2017, Margarita Simonyan, editor in chief of Russia’s major propagandistic channel RT (Russia Today), said in the interview with Russian daily Kommersant in July 2016 that in August 2008, when “the Ministry of Defense was at war with Georgia,” RT was “waging an information war against the entire Western world.”

According to the recent studies conducted by the Media Development Foundation (MDF), the post-war Russian propaganda, on the one hand, sows fear of resumption of the warfare with Russia, and on the other, incites mistrust that in case of unleashing the war, Georgia’s strategic partners will not be able to protect the country.

Russian propaganda tries to accuse Georgia of unleashing the war not only on international arena, but also in internal political discourse, through accusing the formerly ruling and now opposition United National Movement party and its leader of launching the war. The same narrative is voiced by the ruling party members, who claim that there is no creeping occupation;  simply, Russia is delineating “the borders”, which were legitimized by the previous government.

Davit Sergeenko, Health Care Minister: “In describing Russia’s action, the term ‘creeping occupation’ is often applied, unfortunately, which is incorrect in its essence. It is neither creeping nor gradual. It is the delineation of those ‘borders’ which the then government, unfortunately, legitimized in 2008” (Rustavi 2, Kurieri, 3 July; Marshalpress, 3 August; Sakinfromi, 7 August).

At the same time, the pro-Russian political parties are speculating that the United States and the West are not interested in conflict resolution and that Saakashvili launched the war just after being instigated by the West and the United States:

The fear of resumption of the warfare is, in turn, linked to Georgia’s aspirations to NATO as the cooperation between the alliance and Georgia is portrayed as a threat of military escalation.

Nino Burjanadze, United Democratic Movement: “I think this conspicuous provocation [the NATO-military training] will cost us dear… I am afraid that this may have dire consequences for us” (Rustavi 2, Kurieri, 2 August).

To prove that the United States cannot protect Georgia against a threat of war, various respondents have been voicing identical message boxes over the past years, claiming that during the 2008 war the United States assisted Georgia only with “water and diapers.” Emphasis is laid on the fact that in case of similar threat in future, we should not pin hopes on our strategic ally. 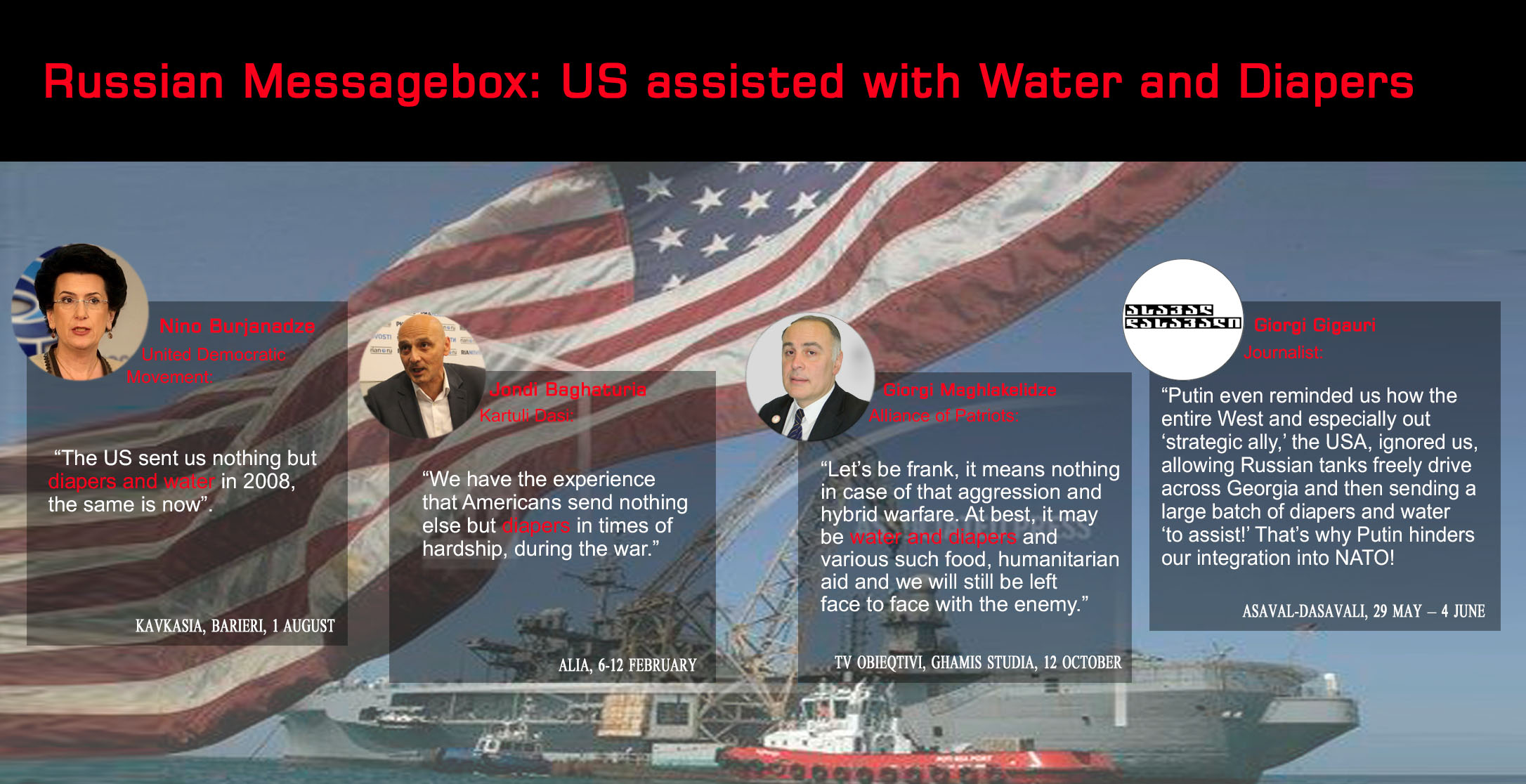 At the same time, by calling for unconditional dialogue with Russia, the pro-Kremlin media outlets and other political actors try to create a feeling that Georgia is not at war with Russia, but the problem is created by the West, which does not let Georgia hold a direct dialogue and normalize relations with Russia.

Jaba Khubua, journalist: “…the Georgian government, fearing Kelly [United States Ambassador to Georgia Ian Kelly], abstains from engaging in dialogue with Russia and discussing the de-occupation of the country in a principled and dignified manner, without saviors and ear-whisperers!” (Asaval-Dasavali, 4-10 September).

Jondi Baghaturia, Kartuli Dasi: “The United States issued an instruction to not engage in any direct dialogue [with Russia], to conduct dialogue with Russians only under their supervision and the Geneva format is such a dialogue” (TV Obieqtivi, Ghamis Studia, 19 May) 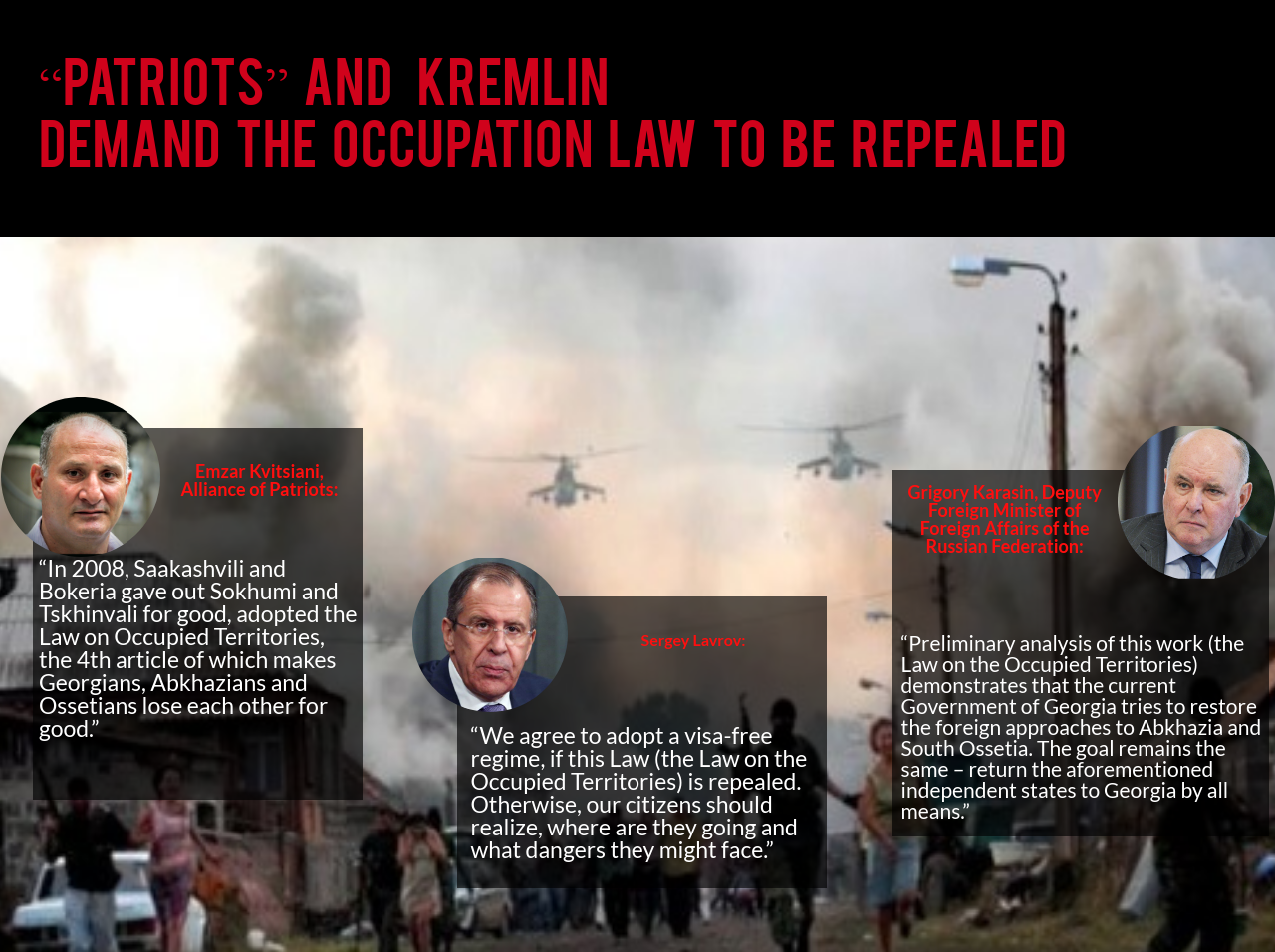 Ten years ago, on August 2008, Russian regular units entered into the Tskhinvali Region of Georgia through the Roki Tunnel. At 23:35 on the same day, President Mikheil Saakashvili issued the order to the Joint Staff of the Ministry of Defense to halt the movement of regular units of the Russian Federation through the Roki Tunnel and to protect peaceful civilians in the Tskhinvali Region.

Earlier, on August 7, at 4:00am, Georgian intelligence intercepted South Ossetian servicemen’s phone calls, discussing Russian troops and armor crossing from Russia into Georgia through the Roki Tunnel. Exchanges of fire in the Tskhinvali Region continued throughout the early hours of August 7 and the shelling of the Georgian villages of Nuli and Avnevi resumed around noon. Two Georgian peacekeepers were killed and five injured after their checkpoint in the village of Avnevi was shelled at 14:00 by South Ossetian forces deployed in the village of Khetagurovo. Later Georgian authorities received new intelligence that the Russian troops deployed near the Georgian border in the North Caucasus had received orders to prepare for moving towards the Georgian border. At 14:30, the Georgian Defense Ministry ordered military forces deployed in various parts of the country to move towards the Tskhinvali Region.

On August 7, Georgia made a decision “to unilaterally cease fire” as a sign of its willingness to defuse tensions. At 19:10 President Mikheil Saakashvili confirmed Tbilisi’s ceasefire announcement in a televised address and offered a number of concessions to the Russian Federation. Russian chief negotiator Yuri Popov said that the sides agreed to hold talks at 13:00, August 8. Georgia’s Ministry of Interior reported violation of ceasefire, with the village of Avnevi coming under fire again around 20:30, followed by Prisi, and later Tamarasheni and other Tbilisi-controlled areas in the conflict zone. After the Georgian leadership received intelligence reports that Russian troops had launched invasion into Georgia through the Roki Tunnel, President Saakashvili issued the order to halt the movement of Russia’s regular units. This is how the August war started. It lasted for five days and ended with occupation of 20% of the territory of Georgia by the Russian Federation.

By 10:00 am, August 8, Georgian forces established control over 70% of the city of Tskhinvali and several adjacent villages. To ensure security of local population, the Georgian government offered to create a special point and a corridor in the village of Ergneti. In two hours, Russia responded to Tbilisi’s initiative with large scale military occupation. Russian aviation attacked Georgian army positions in the vicinity of Tskhinvali. But at night, August 8, President Saakashvili announced that the Georgian army established control over the city of Tskhinvali. On August 9, Russian jets launched air attacks on the city of Gori, bombing residential houses twice, with a 15-minute interval.

Georgia’s territory was subjected to aerial  bombardment over 75 times, with five fully confirmed rocket attacks from the Tochka-U (SS-21) and Iskander-M (SS-26) class of missiles. As of 18 September, 2008, 255 unexploded aviation bombs were discovered and disposed of. Also, dozens of rockets and missiles were used, including cluster bombs. Human Rights Watch also confirmed the use of cluster bombs during the August war.

Over 127 000 persons have turned into internally displace persons (IDPs) as a result of the August war. 250 hectares of forests were burnt in Borjomi district as a result of Russian air force firebombs. In Poti, Russian occupants exploded and sank 12 naval vessels belonging to the Georgian coast guard and the Defense Ministry’s naval forces. About 50 tons of oil products, as well as engine and hydraulic oils were spilled in the Black Sea. 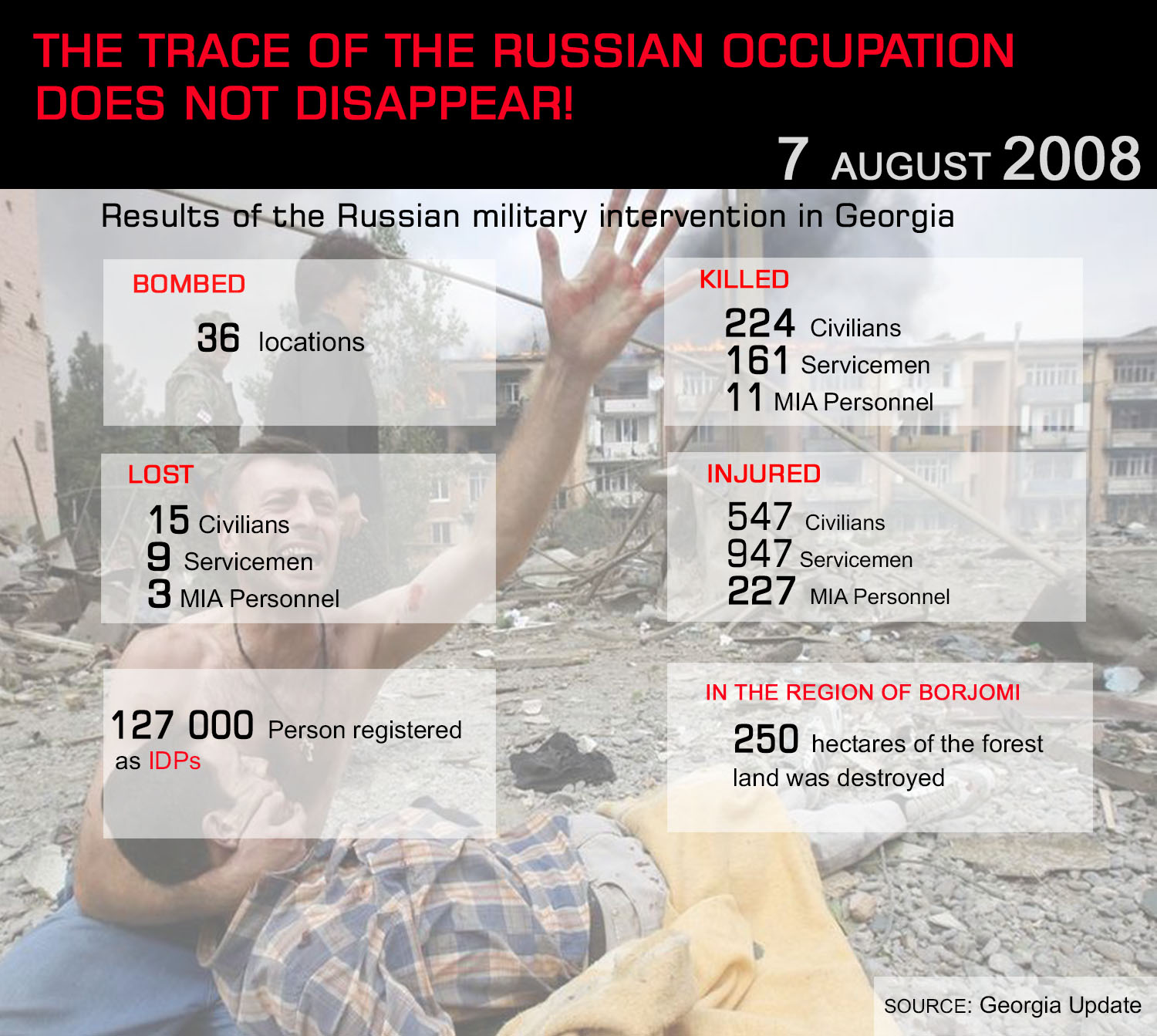