Reports on Military Cargo Transit from Borjomi to Azerbaijan Disinformation

On October 3, an Armenian-language Facebook page posted a video, according to which military cargo is being transited from the Borjomi railway to Azerbaijan. The video involves a footage recorded from a car, showing buildings, railway, trucks, and several tanks. 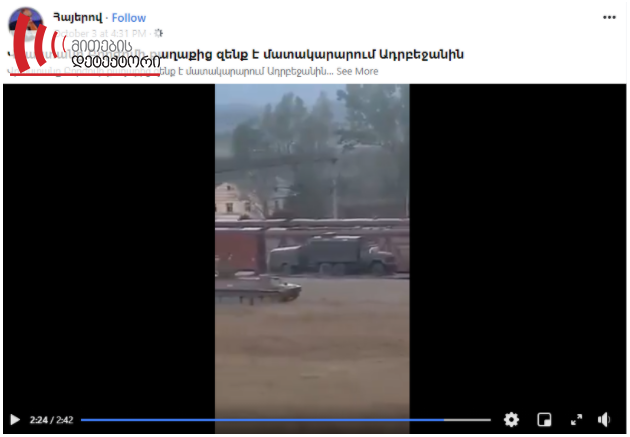 The video does not prove allegations about military cargo transit to Azerbaijan through the territory of Georgia. Moreover, it is difficult to identify where and when it was recorded. The Georgian Foreign Ministry and the Armenian Embassy to Georgia have both denied reports on military cargo transit.

Commenting on the issue, Deputy Foreign Minister of Georgia, Lasha Darsalia slammed the reports on military cargo transit from Georgia to Azerbaijan as “disinformation.”

The Armenian Embassy to Georgia echoed Darsalia’s statement, noting that the reports on arms transit to Azerbaijan through Georgia represent disinformation.

“Let us inform you that the video spread on the Internet, according to which military cargo recorded in Borjomi will be passed to Azerbaijan is not authentic. Military cargo caught on camera belongs to the Armed Forces of Georgia and its movement occurs considering Georgia’s security interests,” the Embassy clarified.

Noteworthy that in connection with the renewed hostilities between Azerbaijan and Armenia, Georgia decided to temporarily suspend the issuance of permits on transiting military cargo through its territory by air or land in the direction of both countries. Georgian Foreign Minister David Zalkaliani noted that the decision was communicated to both Azerbaijan and Armenia.

Disinformation is spreading widely on Facebook amid the intensification of Nagorno-Karabakh conflict that aims at fomenting strife in the society. On October 4, a Facebook user published a sponsored post, involving a drawing with Georgia’s Samtskhe-Javakheti Region marked in red and portrayed as part of Armenia. The drawing was accompanied by a caption containing disinformation: “Akhalkalaki is Armenia. Akhaltsikhe is Armenia.” The post was published by the page created on September 29, which involves no other content, creating an impression that it was created specifically to spread such provocative posts. Moreover, a video allegedly showing military cargo transit to Azerbaijan through Georgia was also shared. This fact, however, has not been confirmed either.