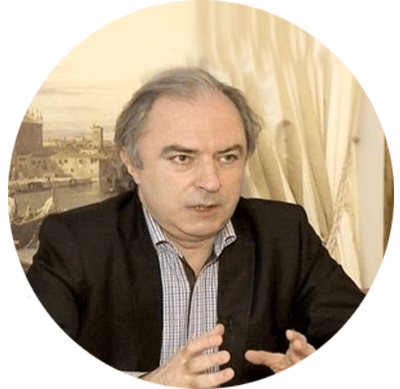 Chachia is a Moscow-based political analyst, whose interviews are regularly posted on Georgian language pro-Kremlin websites – Sakinform and Georgia and the World (Geworld.ge). Simultaneously, Chachia is also a member of the Public Council of “Historical Heritage”, an organization that founded “Georgia and the World”. On February 13, 2014, Russian President Vladimir Putin awarded the Order of Honor to Chachia for his great contribution to strengthening friendship and cooperation with the Russian Federation, development of scientific and cultural ties. The text of the order reads that Alexander Chachia is the chairman of people’s movement Samegrelo and publishes a magazine Istoriuli Memkvidreoba (Historic Heritage), as well as newspapers Ilori and Georgia and the World.
Alexander Chachia, as well as the online publication “Georgia and the World” often appear in researches carried out by the Media Development Fund, as sources of Anti-Western propaganda.