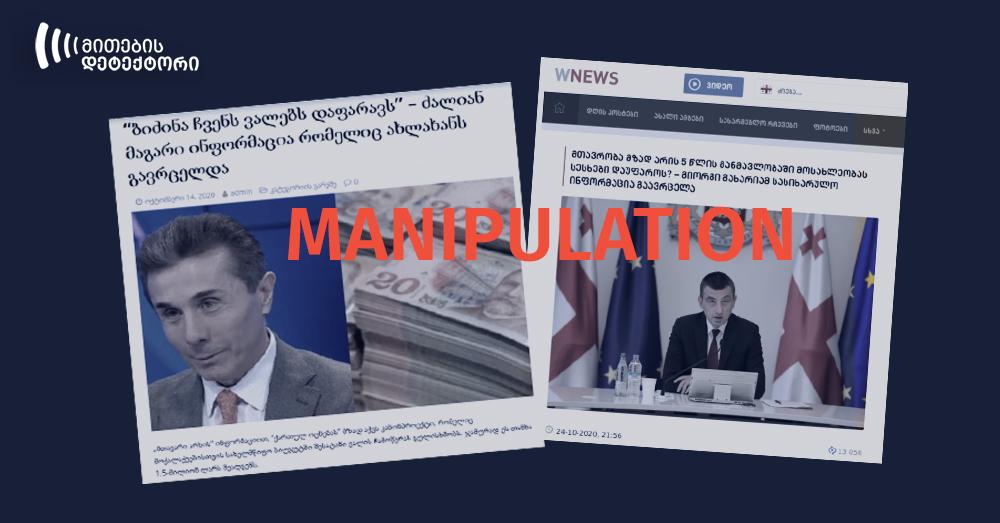 A clickbait website 24news.com.ge published an article titled “Bidzina Ivanishvili Will Cover Debts – Great News that Just Became Public” on October 14. The article mentions that, according to Mtavari Channel, Georgian Dream drafted a bill which would write off debts from citizens. The article does not mention details about the content of the bill or the date of its drafting. While the article is from October 14, it was being shared in various Facebook groups on October 21 and 29 as well.

Another clickbait website www.ge published yet another article about writing off debts on October 24, titled “Government is Ready to Cover Debts of the Population Throughout 5 Years? – Giorgi Gakharia Shared Good News”. The given article concerns the statement by the Prime Minister Giorgi Gakharia about the decision of the government to partially pay the mortgage debt of those citizens who would buy residential real estate until the end of 2020.

The news was disseminated with an identical title by the following clickbait sites as well: netsport.ge, mynews.com.ge, and ese.ge. 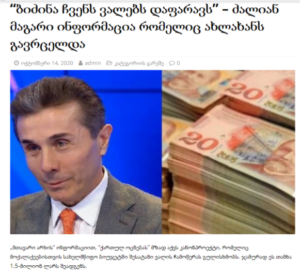 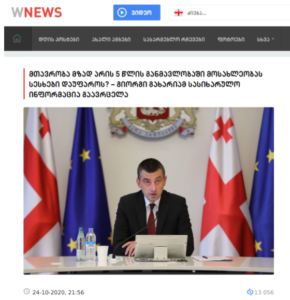 In addition, an article by 24news.com.ge, titled “We Will All Receive This Money, Congratulations – Great News Just Came Out”, which was about covering the costs of treatment of oncological diseases, was shared in two Facebook groups on October 29. 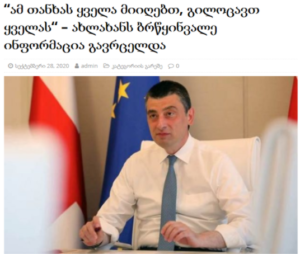 The clickbait websites 24news.com.ge and www.ge are disseminating old news with a new date and misleading titles. In fact, Giorgi Gakharia made a statement about the partial financing of the mortgage debts in June 2020, while the news about the bill on writing off debts were covered by Mtavari Channel on September 7. Manipulative titles with old and incomplete information are misleading and create false promises in the run-up to the election.

Will the debts to the state budget be written off from citizens?

Besides portraying the writing off of debts as recent news, the title of the article by 24news.com.ge associates it directly with Bidzina Ivanishvili, not the ruling party.

What statement did Gakharia make and when?

The Prime Minister of Georgia, Giorgi Gakharia, stated that the state would partially fund the mortgage debt for five years to those citizens who would buy a residential real estate until the end of the year. According to Gakharia, this decision aimed to stimulate construction and support those 25 thousand citizens that had already taken the mortgage debt.

Neither the title nor the content of the article by www.ge mentions when the statement was made and what are the details of the debt subsidy, which were already known on June 25. The subsidy is issued for the debts worth GEL 200,000 at most; the state stops the subsidy if the refinancing rate drops below 5%.

The September 28 article by 24news.com.ge had a manipulative title as well. Despite the relatively old publishing date, it was shared in various Facebook groups on October 29 as well. While Gakharia’s September 1 statement concerned increasing the financing for oncological patients, the article created a perception as if everyone would get financial aid.

According to Crowdtangle data, the article by 24news.com.ge titled “Bidzina Ivanishvili Will Cover Debts – Great News that Just Became Public” was being shared in various Facebook groups between October 14-29.

As for the article by www.ge titled “Government is Ready to Cover Debts of the Population Throughout 5 Years? – Giorgi Gakharia Shared Good News”, which has also been published by other clickbait sites with the identical title, it has been shared in 13 public Facebook groups.

The article by 24news.com.ge from September 28 titled “We Will All Receive This Money, Congratulations – Great News Just Came Out” was shared on October 19 in Facebook groups „მთავარი არხის მხარდამჭერების ჯგუფი“ (Group of supporters of Mtavari Channel) and  „საინფორმაციო ჯგუფი“ (Informational group). 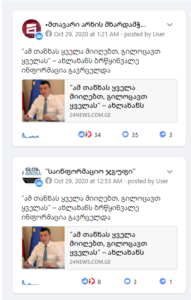 www.ge was registered on June 3, 2000. According to the Registrator, the name of the administrator is Khatuna Shubitidze, and the email address is [email protected]. 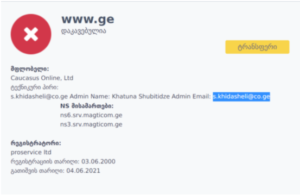 The date of creation of 24news.com.ge is May 14, 2020. Information about its owner is not available. 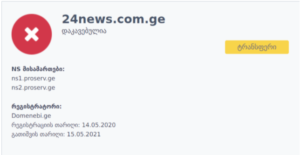 The so-called clickbait websites position themselves as media outlets, however, what they actually have is juts appealing, loud headlines that attract attention of the readers and earn income via clicks. These websites also include yellow journalism, 18+ ads, suspicious treatment methods etc.