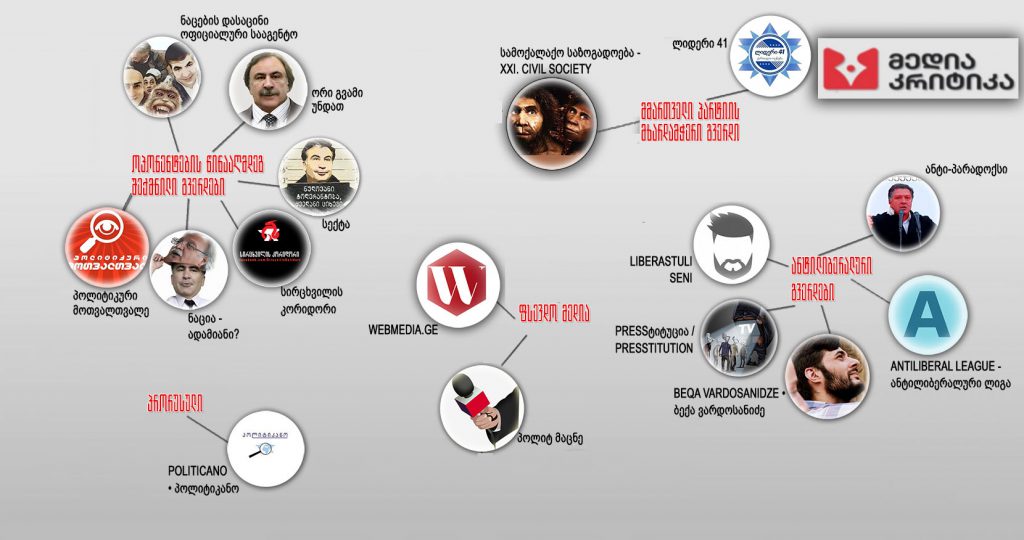 Publication of results of a public opinion research by the National Democratic Institute (NDI) on January 16 was followed by sharp criticism from the ruling party representatives.

Mayor of Tbilisi, Kakha Kaladze labelled the results of the opinion polls political manipulation, while the Vice Speaker of the Parliament, Giorgi Volski stated that he did not trust NDI. The Leader of the Alliance of Patriots, Irma Inashvili joined the pathos with even sharper criticism, accused the organization of terrorism and demanded that an investigation against the Head of NDI Georgia, Laura Thornton be launched. A web-portal of the Georgian National Communications Commission – www.mediacritic.ge published an article by Guri Sultanishvili, a journalist of a pro-governmental channel POSTV, where he compared NDI public opinion data, which are sampled from the entire population of Georgia, with the figures of those who voted and thus, put the trustworthiness of the organization under question.

In parallel with the criticism expressed by the government representatives and the pro-Russian Alliance of Patriots towards NDI, an organized and coordinated negative campaign was carried out by various actors both online and in traditional media against the organization and its Head, Laura Thornton.

Following messages have been disseminated under the negative campaign directed at NDI and Laura Thornton:

There has been an organized negative campaign targeting NDI and Laura Thornton since January 16 that mostly included the following messages:

The messages were being disseminated by the following actors: 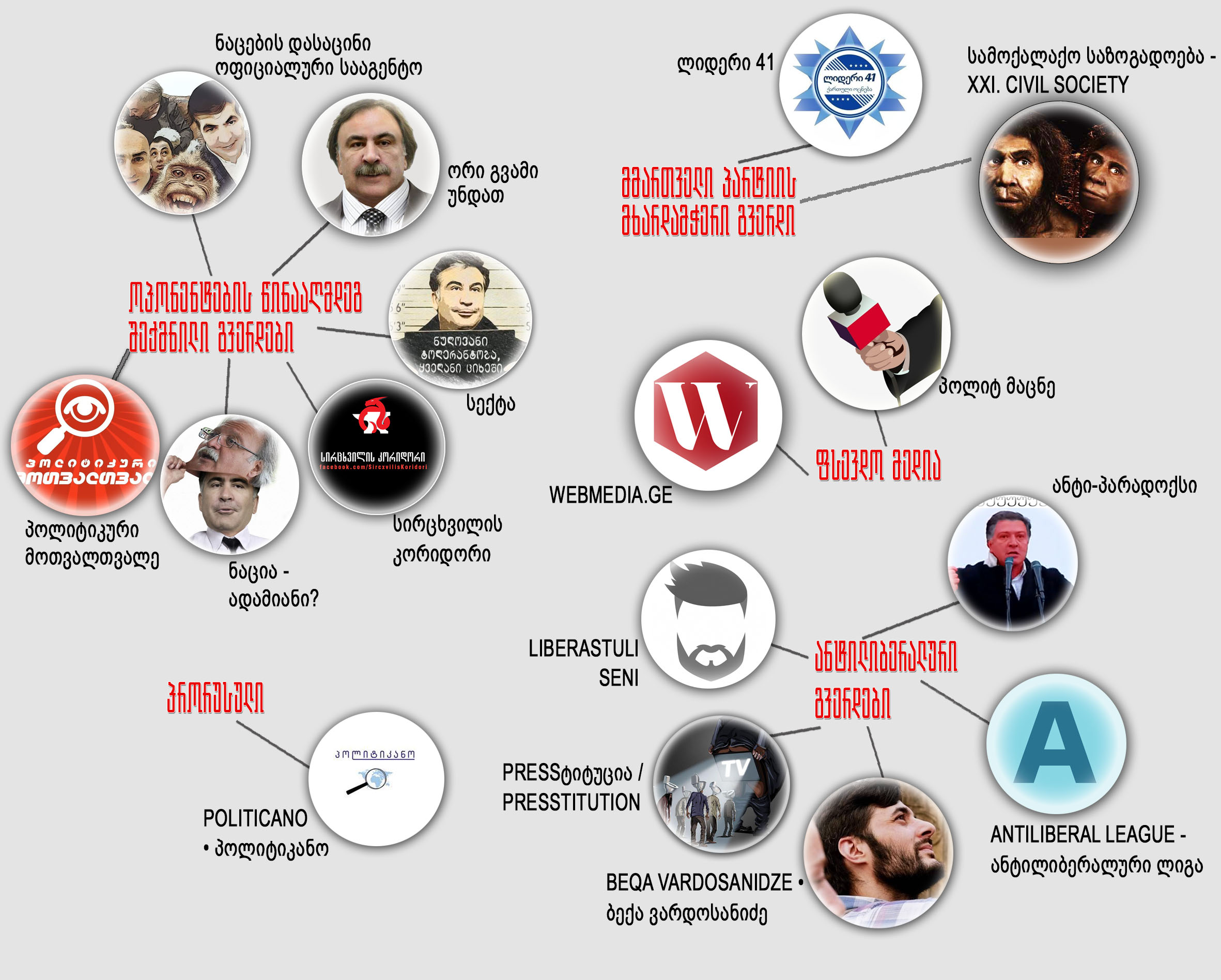 The message, according to which the National Democratic Institute and the Head of its Tbilisi Office are politically biased, has been disseminated both by the Facebook pages directed against the opponents of the Georgian Dream and by anti-liberal pages. They are using identical visual materials to this end. For example, anti-liberal pages “Beqa Vardosanidze • ბექა ვარდოსანიძე” and “Pressტიტუცია / Presstitution”, as well as the page created against the opponents of the government “სირცხვილის კორიდორი” published a photo where the Chief Editor of Tabula, Tamar Chergoleishvili and Thornton can be seen together. 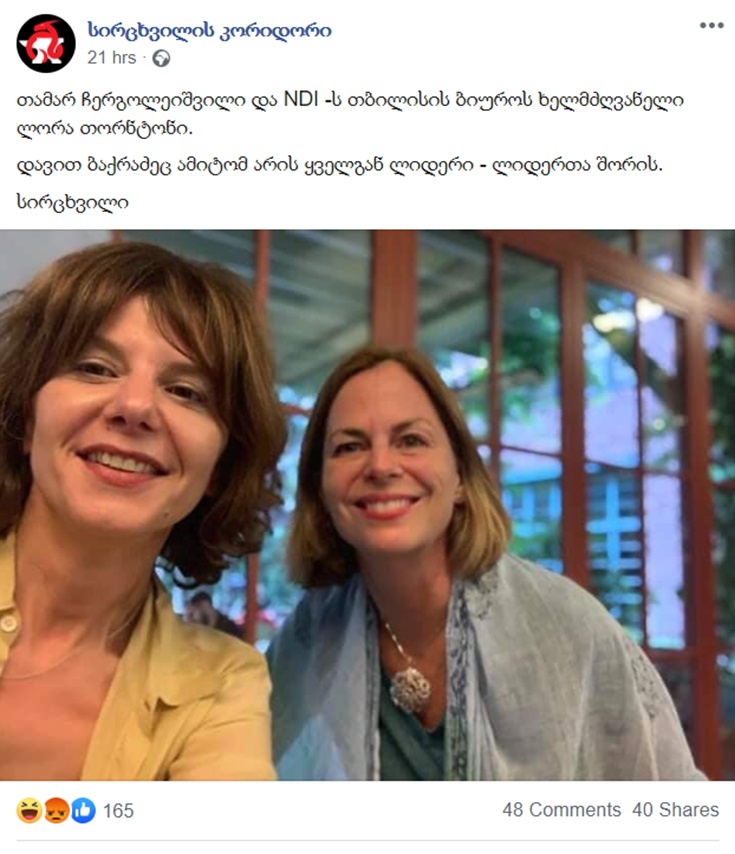 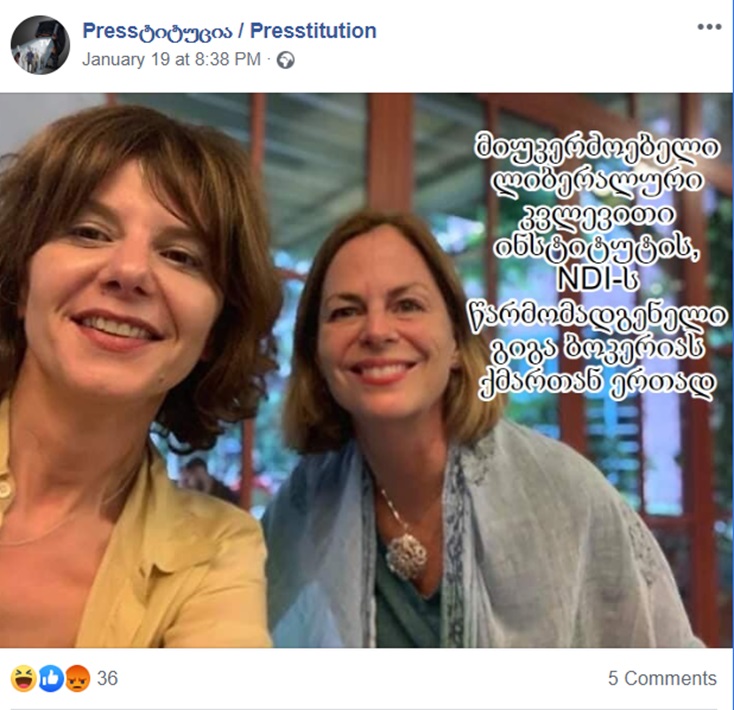 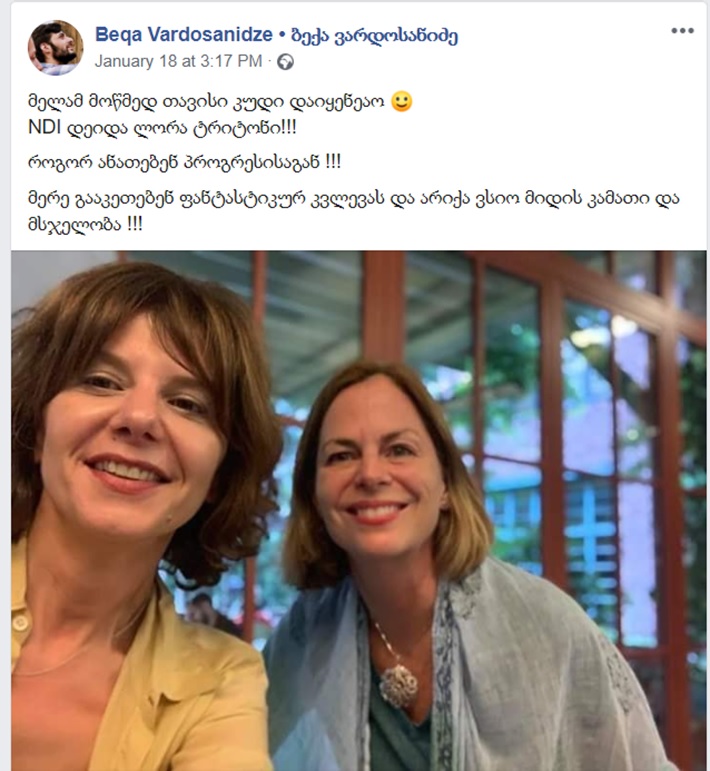 A page created against the opponents of the government, “ნაცების დასაცინი ოფიციალური სააგენტო” and an anti-liberal “Antiliberal League – ანტილიბერალური ლიგა” used similar memes to illustrate the affiliation of NDI with UNM where Davit Bakradze and Irma Nadirashvili can be seen. 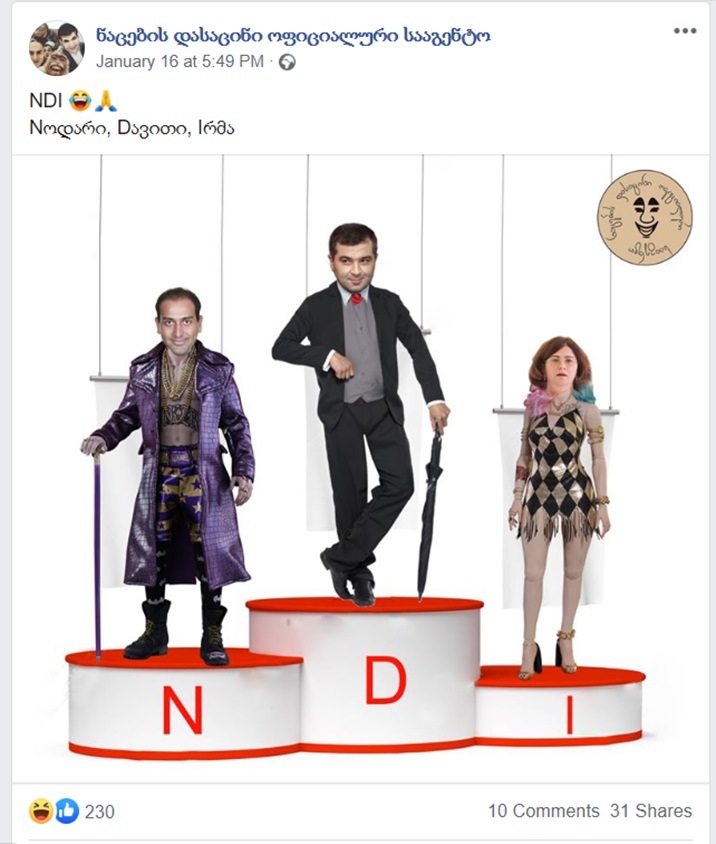 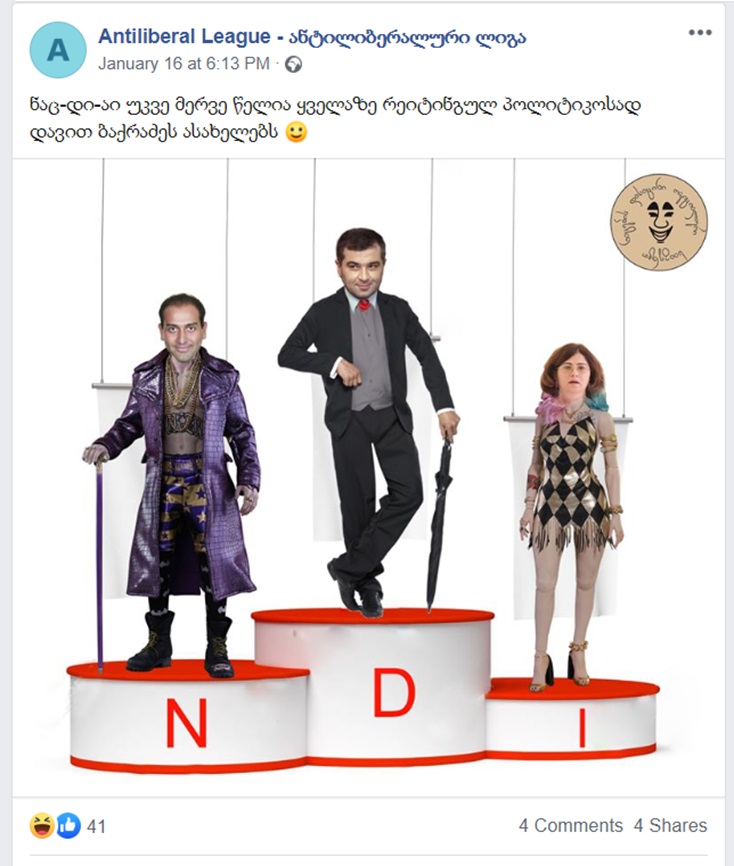 NDI is an unreliable organization

A Facebook page created on January 13, 2020 called “პოლიტიკური მოთვალთვალე” published a diagram in a sponsored post that showed the “divergence” between NDI and the Election Administration of Georgia in a manipulative way. The post was shared by a pro-Georgian Dream Facebook page “სამოქალაქო საზოგადოება – XXI. Civil society” and an anti-liberal page “Beqa Vardosanidze • ბექა ვარდოსანიძე”. 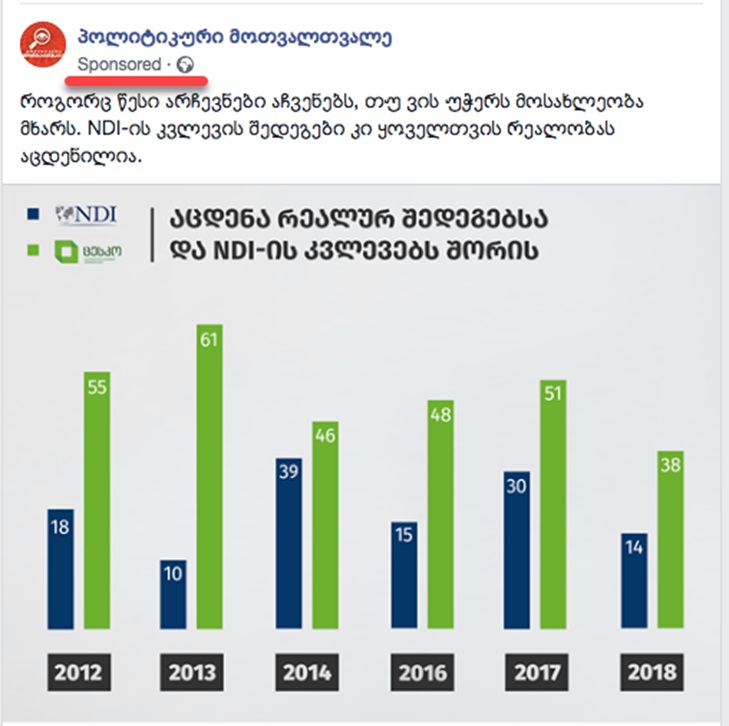 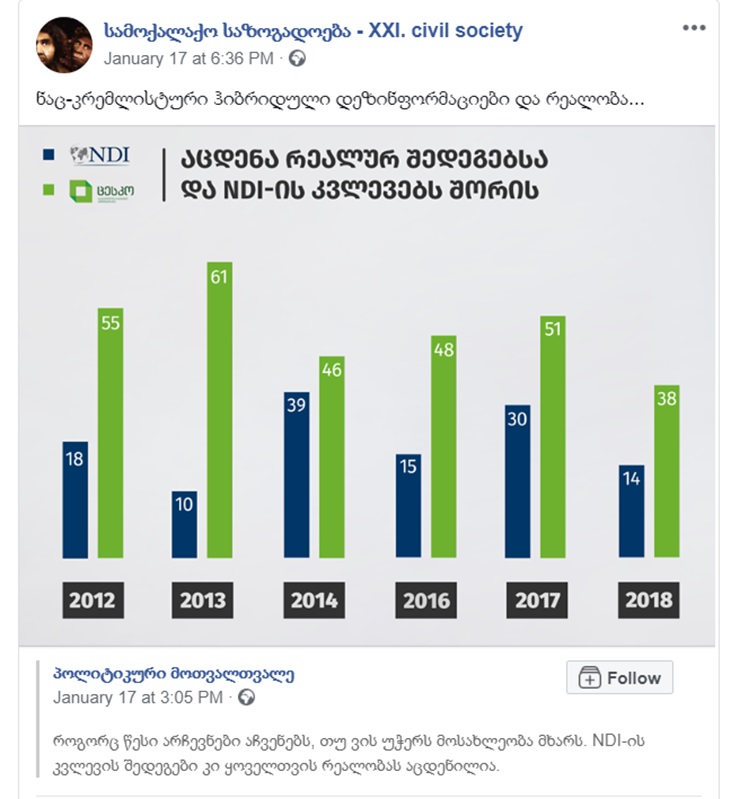 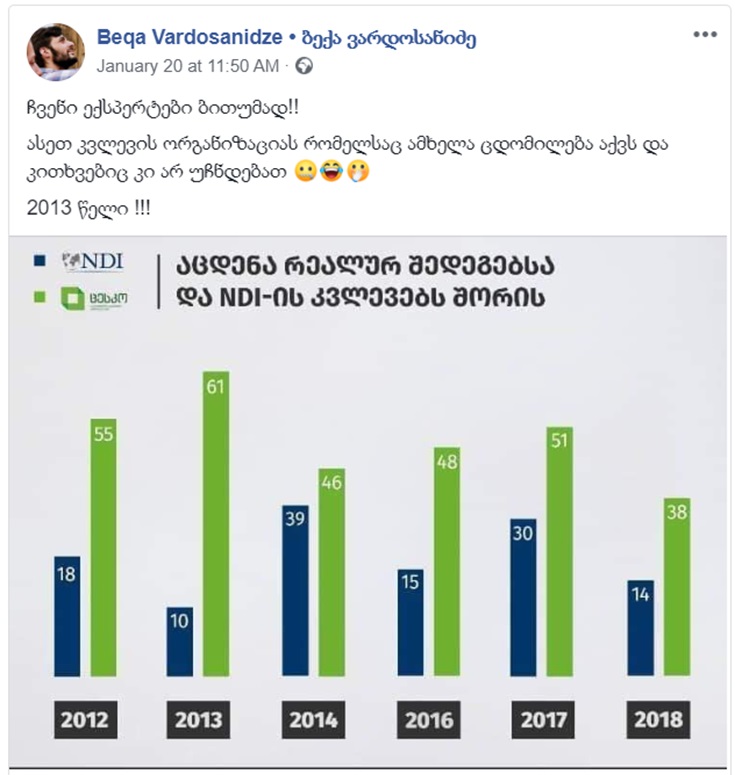 The results of the NDI opinion polls were labelled as a “fantasy” by an anti-liberal page “Beqa Vardosanidze • ბექა ვარდოსანიძე” and as “a theatre of absurd” by an pro-Georgian Dream page “ლიდერი 41”. 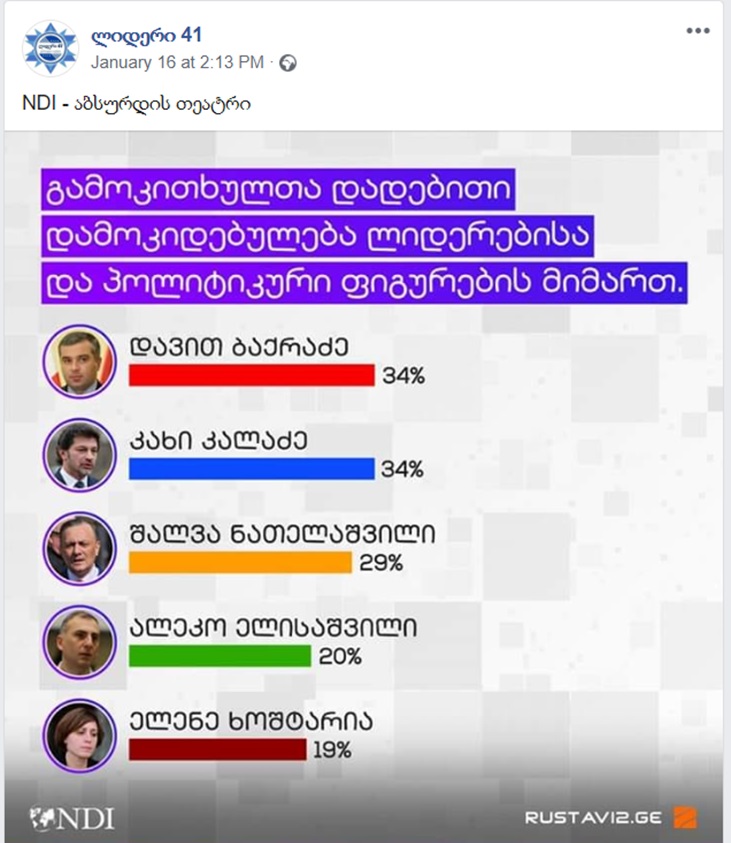 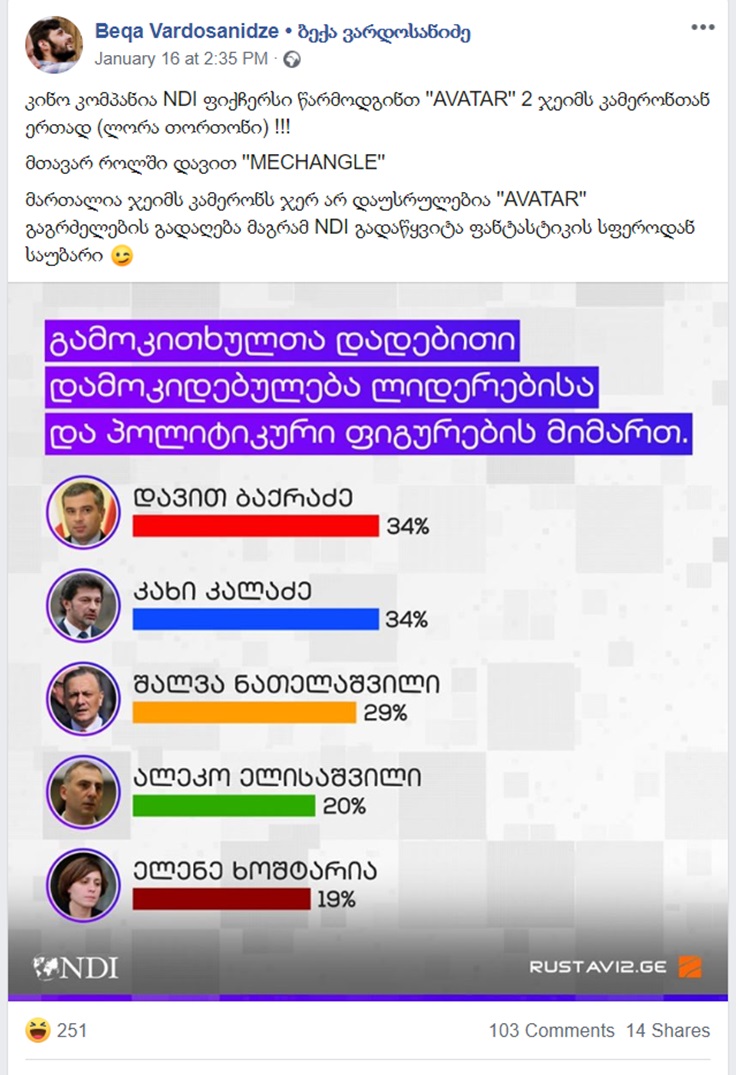 A comment by a host of a political talk show on TV Imedi, Valerian Gorgiladze, was shared by two pseudo media outlets – “webmedia.ge” and “პოლიტ მაცნე”.

Pages targeting the opponents of the government – “სექტა” and “სირცხვილის კორიდორი” recalled opinion polls carried out by NDI earlier, including the one conducted prior to the 2012 Parliamentary Elections in Georgia and wrote manipulative posts on that matter. 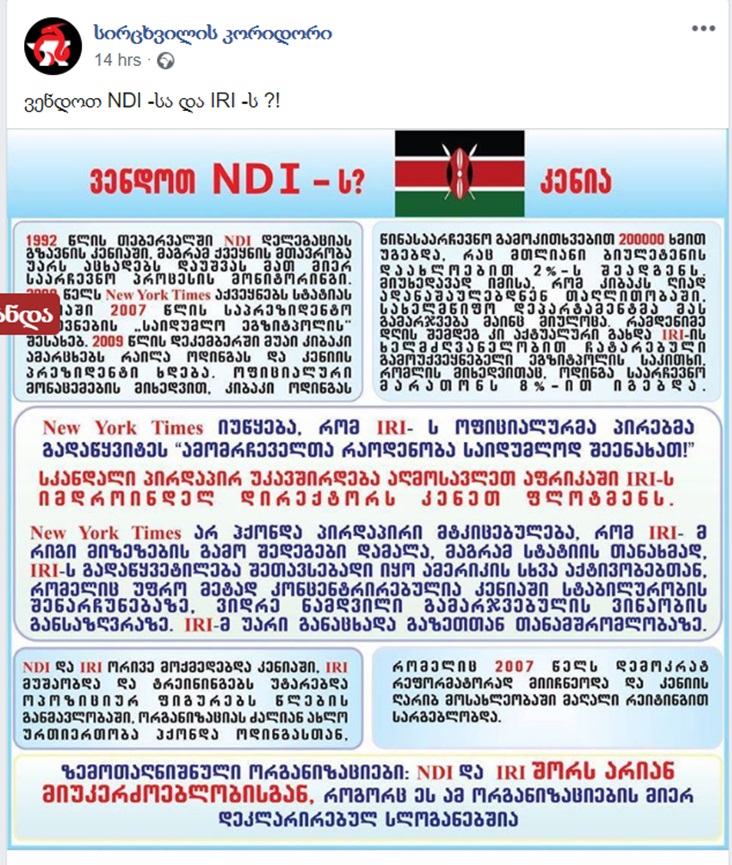 An anti-liberal Facebook page “ანტი-პარადოქსი” ran an “alternative” public opinion survey and established that their subscribers do not trust the organization. 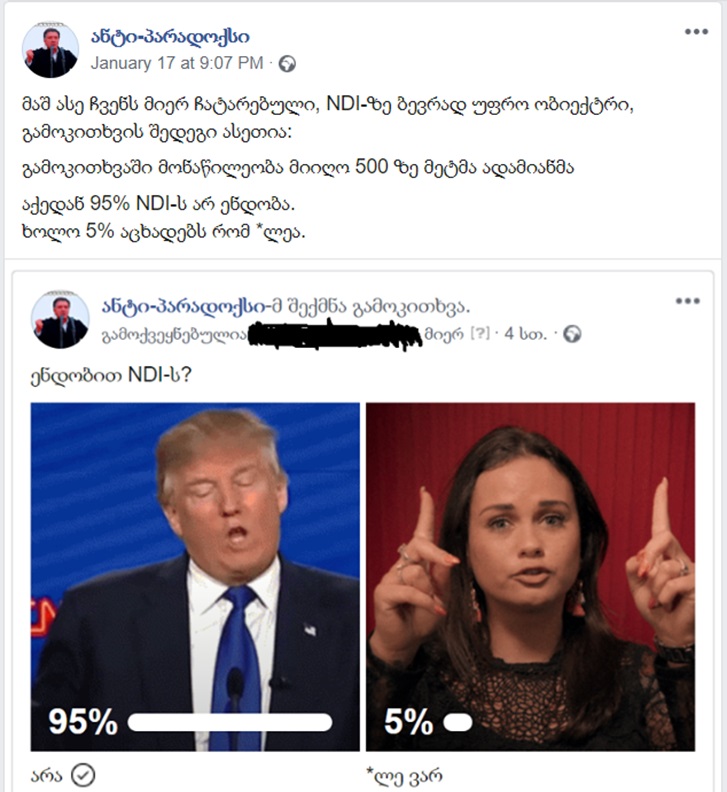 NDI is organizing a coup d’etat

A pro-Russian Facebook page “პოლიტიკანო” devoted a long post to NDI discussing the connection of the organization with the Central Intelligence Agency and accusing it of attempted coups d’etat in Kyiv, Venezuela, and Hong-Kong.

Laura Thornton is an LGBT activist and supports abortions 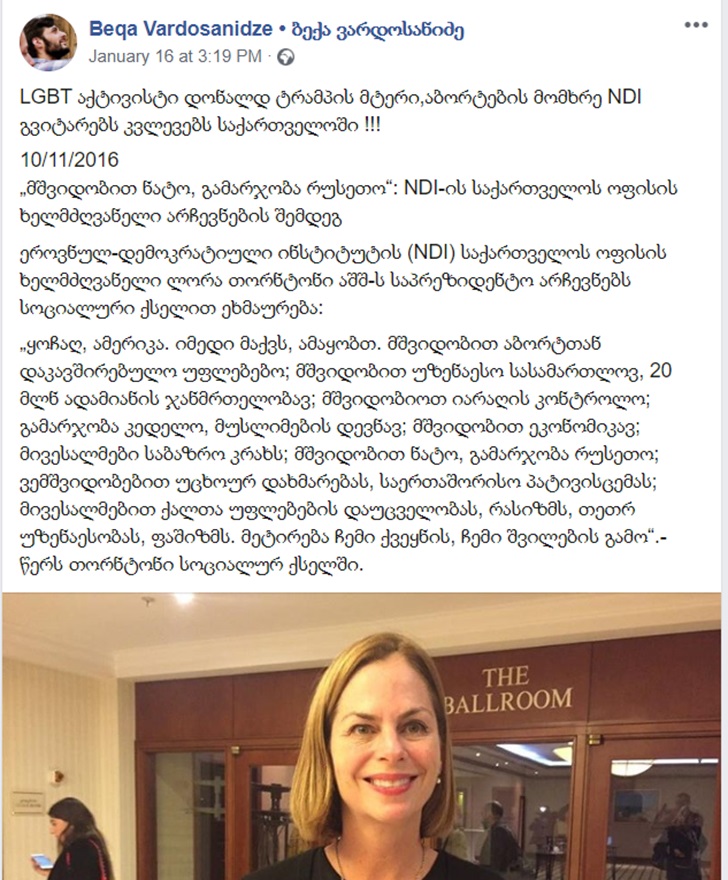 Detailed information on the negative narratives targeting NDI are available in our article – “Arithmetic of the Georgian Dream is Based on Voter Turnout, while NDI Research is Based on the Entire Population”.