Myth, that the WEST Provoked the Military Conflict in Ukraine, is Misleading 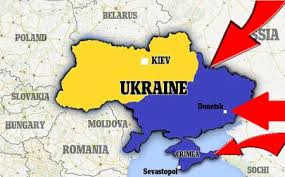 Blaming the West for the ongoing war in Ukraine is a part of the propaganda by the pro-Russian groups in Georgia. In fact, the crisis in Ukraine was caused by the actions of the Russian Federation that in the end turned into its direct military aggression.

In November 2013 President of Ukraine Victor Yanukovich decided to suspend signing of the Association Agreement with the EU.This decision was made by him under pressure from the Kremlin.Part of this pressure was the trade war  launched by Russia against Ukraine in August 2013. The Russian customs stopped letting Ukrainian products across the border.As a result, in December2013, Ukrainian exports decreased by 1.4 billion US dollars. During the same period Ukrainian industrial production also fell significantly(by 4.9% as compared to 2012).

As a result of Kremlin’s very strong economic and political pressure, Yanukovich had in fact rejected European integration, which caused massive protests in Ukraine.During the period of the protest rallies the Russian government repeatedly demanded from Yanukovich to take harsh measures against the demonstrators. On 18 February 2014, just few hours before the government’s bloody assault against the protest rally participants, Moscow granted 2 billion US dollars in aid to the Ukrainian government.

On 22 February 2014, after Ukrainian Parliament deposed Yanukovich from presidency, it became clear that the Kremlin was losing political control over Kiev. Russia launched military aggression against Ukraine right away. Kremlin had been preparing this aggression from the propaganda point of view for a long time. Russian state media had been calling Ukrainian protest rally participants “fascists”,and predicting dismemberment of Ukraine in the case the protest movement succeeded.

In the early morning of 27 February 2014,only 5 days after Yanukovich had been deposed, a Russian Special Forces unit took over the government and parliament buildings of the Autonomous Republic of Crimea. After that, Russian regular military units invadedand occupied Crimea.In April 2014 Russia launched its activities in Ukraine’s eastern and southern regions too. Subversive groups sent from Russia managed to start the military conflict in Donetsk and Luhansk oblasts, unlike other regions.

From April to August 2014Russia was waging its fight against Ukraine in a way similar to the Russian actions against Georgia in the Abkhazian War of 1992-1993. More specifically, participation of the Russian regular military units was limited to artillery and Special Forces. Most of fighting was done by the groups of militantsentering Ukraine from Russia. This strategy, however, turned out to be not enough to defeat Ukrainian military. On 24 August (Ukraine’s Independence Day) Russian regular military units crossed the border between Russia and Ukraine in Donbas region, launching attack against Ukrainian army.

Russian military aggression in Ukraine is a part of the strategy directed against the sovereignty of the post-Soviet nations, while blaming the West for the Ukrainian crisis is an attempt to justify the aggressor.Other parts of this Russian strategy are: occupation of the Georgian territories, economic and political pressure on Moldova in order to force this country to reject integration with the EU,forcing Armenia to agree to the membership of the Eurasian Union, as well as unceasing provocationsagainst the Baltic nations.