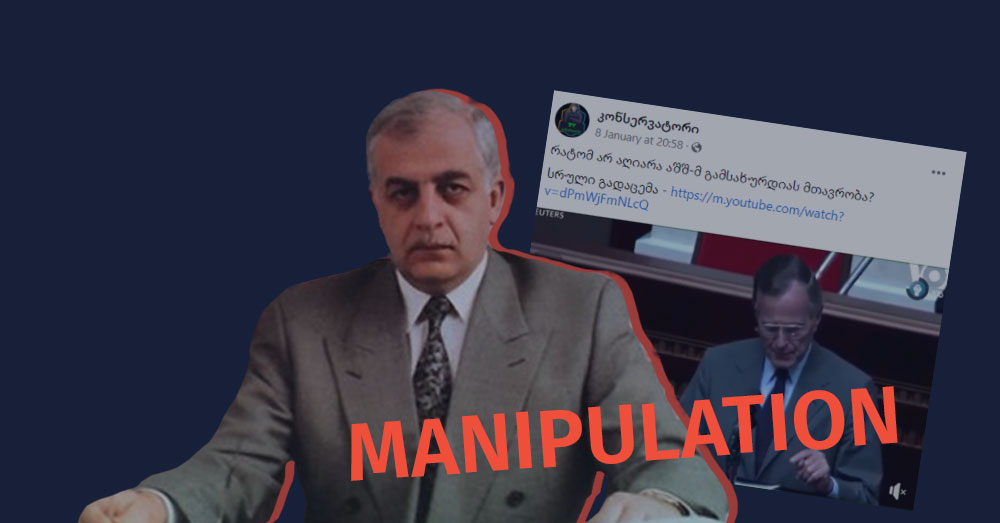 On January 8th, 2022, the Facebook page ‘Conservative’ published a fragment of the documentary about the 30th anniversary of Georgia-US diplomatic relations prepared by the Voice of America. The fragment concerns the US attitude towards the first president of Georgia, Zviad Gamsakhurdia and features a statement by the 41st President of the United States, George W. Bush, about the threat of “local dictatorships” in post-Soviet countries, and a comment by the first US ambassador to Georgia, Kent Brown, who called Zviad Gamsakhurdia an “unpredictable and unstable dictator.” Even though the end of the two-minute video features a talk about the US recognition of Georgia’s independence during Zviad Gamsakhurdia’s presidency, the Facebook page has disseminated the video with the following caption: “Why did the US not recognize the government of Gamsakhurdia?” 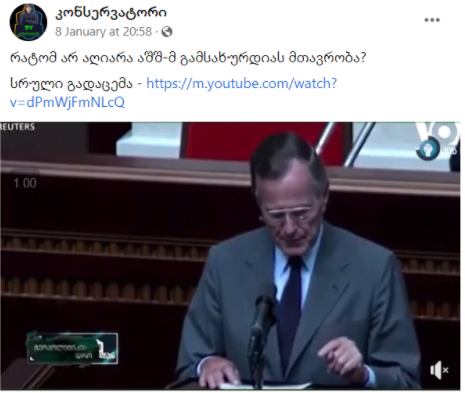 Zviad Gamsakhurdia became the first president of independent Georgia as a result of the presidential elections held on May 26th, 1991, after the restoration of Georgia’s independence. Despite growing opposition to the Kremlin in the Soviet republics, US President George W. Bush has still backed Mikhail Gorbachev as a reformer and supporter of democratization. The United Statesrecognized the independence of the members of the former Soviet Union on December 25th, 1991, following the resignation of Mikhail Gorbachev and the formal dissolution of the Soviet Union.

Zviad Gamsakhurdia was the President of Georgia at that time, but due to the military coup that began on December 22nd, 1991, on December 25th, part of the Georgian government and MPs, including Zviad Gamsakhurdia himself, remained in the so-called ‘bunker’ in the building of the Georgian Parliament. The United States began establishing diplomatic relations with the governments of the former Soviet republics, including Armenia and Azerbaijan, in February 1992, although by this time (since January 6th, 1992) Zviad Gamsakhurdia was no longer in Georgia. Due to the unstable political situation in the country, diplomatic relations between the United States and the Georgian government were established on March 24th, 1992, which was a bit late compared to the other post-Soviet republics. By this time, Georgia was ruled by Eduard Shevardnadze.

The Facebook page “Conservative” was created on December 1st, 2021. The page often publishes anti-liberal content and shares complete versions or excerpts from the TV programs of far-right and pro-Russian Alt-Info. 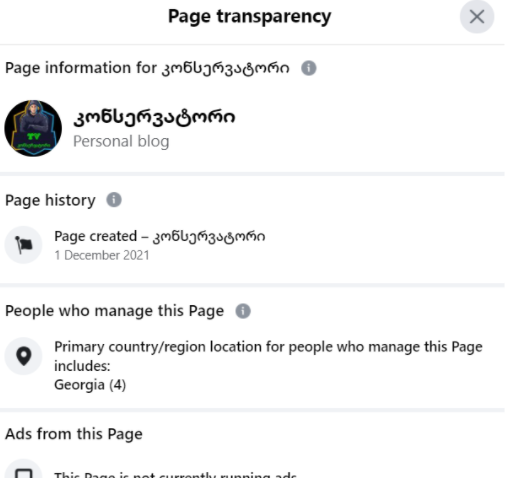 Notably, another far-right Facebook page with the same name, which was created in June 2021 and was characterized by the activesupport of the “Alt Info” group, has now been deleted. For more on the deleted “Conservative,” see the article of “Myth Detector”: