Manipulations from “National Power” regarding the number of Muslims in Europe 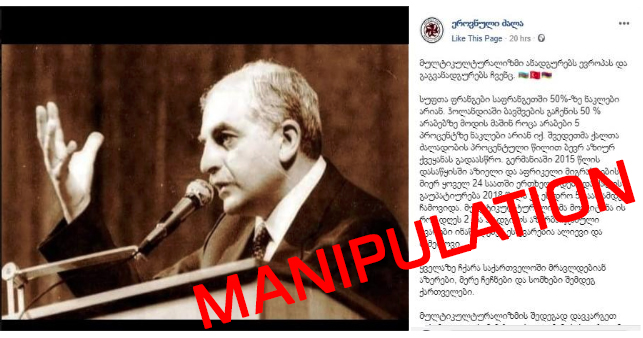 On December 12, 2018, Facebook page of “National Power” posted the following: “Multiculturalism destroys Europe and destroys us too.” In order to prove this, they used the statistical data. According to these statistics, multiculturalism is the reason behind the increase of crime rate and the reduction of titular nations in European countries. The post claimed that, allegedly, according to the UN report, “Georgians may become minorities in their own homeland” by 2050, as birth rate among ethnic Georgians is low compared to other ethnic groups living in Georgia. 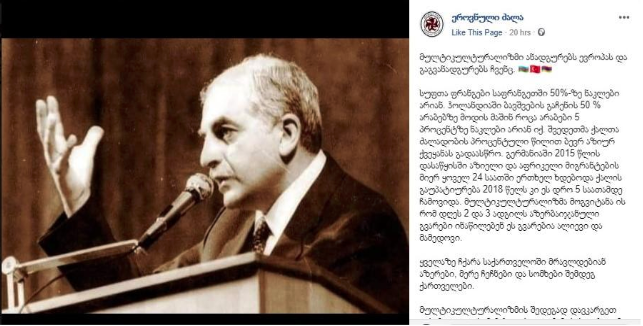 The “National Power” does not indicate the source of the statistics provided by them. Besides, these statements are false. Citizens of France are not registered on ethnic grounds, as all who are French citizens are considered French. There are also no statistics about the birth rate of people of Arabic origin in the Netherlands. However, there are statistics on the number of Muslims in Europe that ultra-nationalist groups often exaggerate and manipulate with numbers. As for Georgia, there is no such statement in the UN report, that Georgians are destined “to become minority in their homeland”. This is continuation of the myth that based on the report by UN, Georgians will be on the list of endangered nations by 2050. This statement is also false.

FACT N1: There is no statistical data that shows the share of ethnically French people among French population

According to the National Institute of Statistics and Economic Research of France, French law does not allow the classification of the population based on race and ethnic origin. According to the constitution, all French citizens are considered French. Statistics can be calculated based on survey of “feelings of belonging”, which allows French citizens to self-identify, despite their ethnic origin. However, there are statistics that show the share of Muslim population in France. According to Pew Research, Muslims constitute 8,8% of France’s population.

“National power” claims that in the Netherlands “50% of newborns are Arabs”. It should be noted that despite the high rate of birth, the most important factor is the share of Muslims in the Dutch population. In the official statistics, Arabs are not separated as separate groups, therefore, the given statistics are based on the percentage of Muslims in the population. According to Pew Research’s 2016 report, only 7,1% of the Dutch population is Muslim.

FACT N3: There are no statistics showing the number of sexual assaults committed by the Asian and African migrants in Germany

Besides the fact that the post does not indicate the source of this information, it should be noted that statistics that only reflect the crimes committed by Asian and African migrants in Germany do not exist. According to the 2017 report of the German Federal Criminal Police Service, from 9,414 suspected of sexual offenses, 5,931 were German and 3,483 were non-German. According to BBC, in 2017, 11,7% of the suspects in sexual offenses were asylum seekers or refugees.

FACT N4: UN website does not have statistics, according to which Georgian ethnic group in Georgia will become minority by 2050

It should be noted that, according to the National Statistics Office of Georgia (Sakstat), the birth rate in Georgia exceeds the mortality rate. In 2017, there were 53,293 births along with 47,822 deaths.

Based on these statistics, manipulative articles were published by Russian-language media outlets such as: Sputnik, Geo Digest, the House of Education, agora.ge and others. The publications were spreading misinformation as if the United Nations put Georgia into the list of endangered countries.