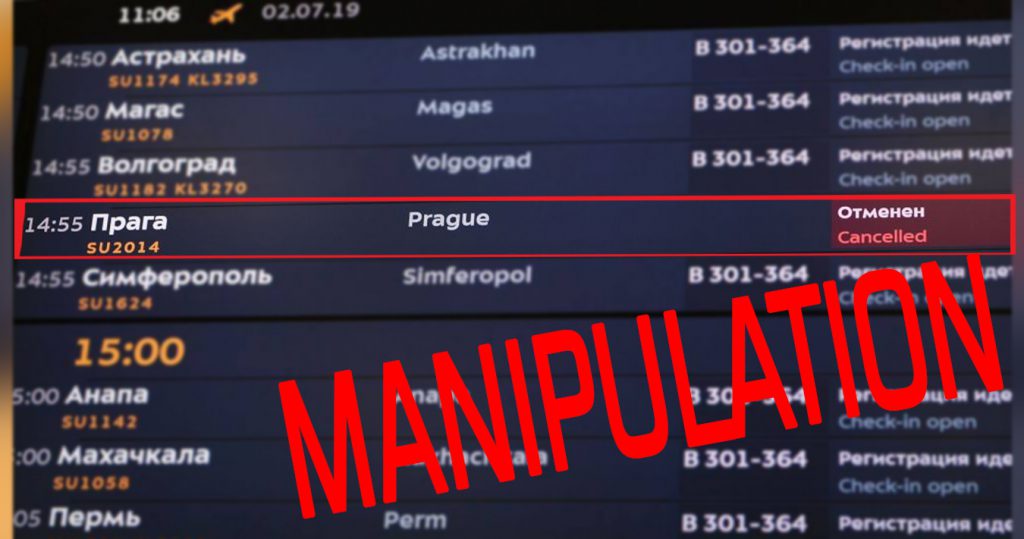 On July 2, 2019, Sputnik Abkhazia published news titled “Prague Violated Agreement of Flights, says Ministry of Transport of Russia”. The article touched upon an aviation agreement signed between Russia and the Czech Republic, based on which flights were carried out between the two countries, however, flights of Russian airlines to Prague were cancelled. 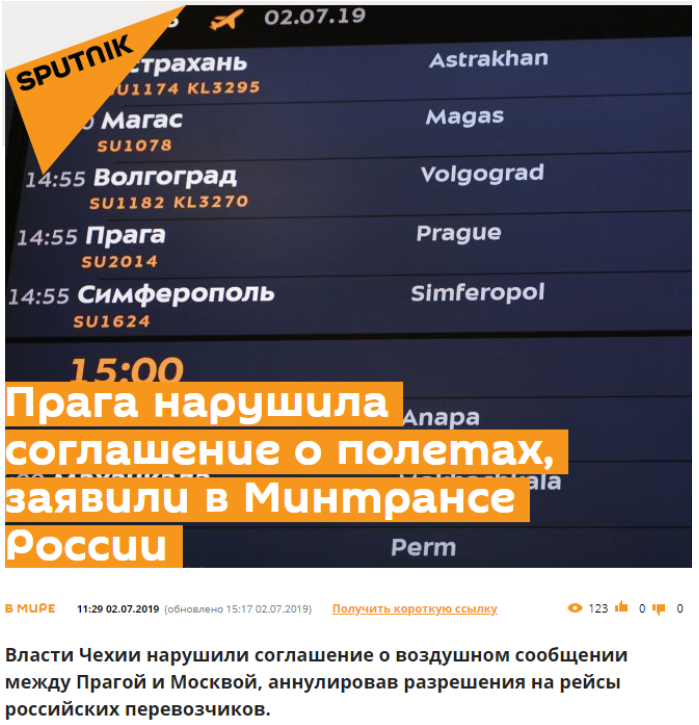 Sputnik Abkhazia’s article that Czech Government allegedly violated the Prague-Moscow Agreement, is manipulative. The bilateral agreement was, in fact, initially violated by Russia when they restricted Prague – Seoul flights through Siberia, while the Czech Republic, in return, cancelled flights to Russia. Currently, flights between the Czech Republic and Russia are renewed until July 7.

On July 2, 2019, several flights of Aeroflot, Pobeda, and Ural Airlines were cancelled. The cancellation of flights was caused by the cancellation of permission for Russian airlines by the Government of Czech Republic.

The decision of Prague was preceded by the Agreement on Trans-Siberian route. According to the Transportation Ministry of the Czech Republic, Russia unilaterally violated Prague – Seoul flights of CSA (Czech Airlines) through Siberia that was envisaged by the 2005 Intergovernmental Agreement. Russia seriously harms the business interests of the Czech Airlines by restricting Prague – Seoul flights. The trans-Siberian route is the shortest, cheapest, and the most available not only for the Czech Republic, but airlines of other countries as well, who fly from Europe to Asia.

According to the Director of CSA, Jiri Siman, the reason for the commercial disputes initially became the additional flights requested by the Russian airlines – something that the Ministry of Transportation of the Czech Republic did not grant them. This was followed by an act of revenge, i.e. blocking flights through Siberia. This was the violation of the bilateral agreement by Russia, so the Czech Republic reacted accordingly and cancelled the permission to the Russian airlines.

“The Czech side is not trying to block air traffic between the two countries, but it must defend the legitimate interests of its air carriers” – said the Ministry of Transportation of the Czech Republic.

“Myth detector” contacted Pavel Havlicek, analyst of Association for International Affairs in Prague. He also stated that Russia violated the agreement first, while the Czech Republic resorted to counter measures.

Currently, the flights between the Czech Republic and Russia are renewed until July 7 and the two sides hope that they can soon reach an agreement.