“Kardhu” Fakes a Quote by the U.S. Ambassador 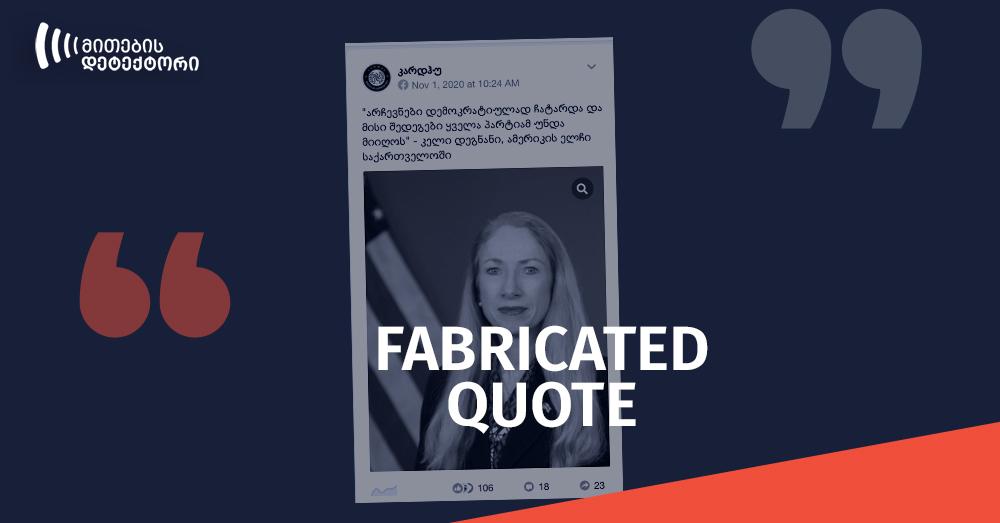 On November 1, a Facebook page „კარდჰუ“ (Kardhu) shared what was allegedly a comment by Kelly Degnan, the United States Ambassador to Georgia, together with her photo. According to the post, Ambassador Degnan stated the following: “Elections were held democratically and all parties should recognize its results”.

The post had 42 shares, 174 reactions, and 34 comments an hour after publishing. 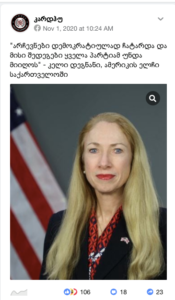 The disseminated quote is fake, as the U.S. Ambassador has not commented on the elections after the election day. On the day of the elections, October 31, she called on parties, candidates, and their supporters to respect the process of counting the ballots and accept the official results calmly to show that this election meets international standards.

The statement by the ambassador stresses the importance of assessing the elections in accordance with the international standards, namely those laid out by the OSCE’s ODIHR. International assessment of the results usually takes place after the official election results are announced.

“Kardhu” has already faked a statement regarding the elections, when it falsified the following alleged quote by congressman Adam Kinzinger: “Nobody will like the results of the October [Parliamentary] elections, but that will be democracy – Adam Kinzinger”. Kinzinger had actually stated: “ nobody’s going to be happy, as a guy that’s been doing politics for a while, nobody’s ever happy with anything, that’s what democracy is. “ .

Facebook page Kardhu was created on July 23, 2017. It spreads hate speech against national, sexual and other minorities, also incites Euro-skepticism and mistrust towards NATO.