Is Uranium-238 Mined in Rioni Gorge? 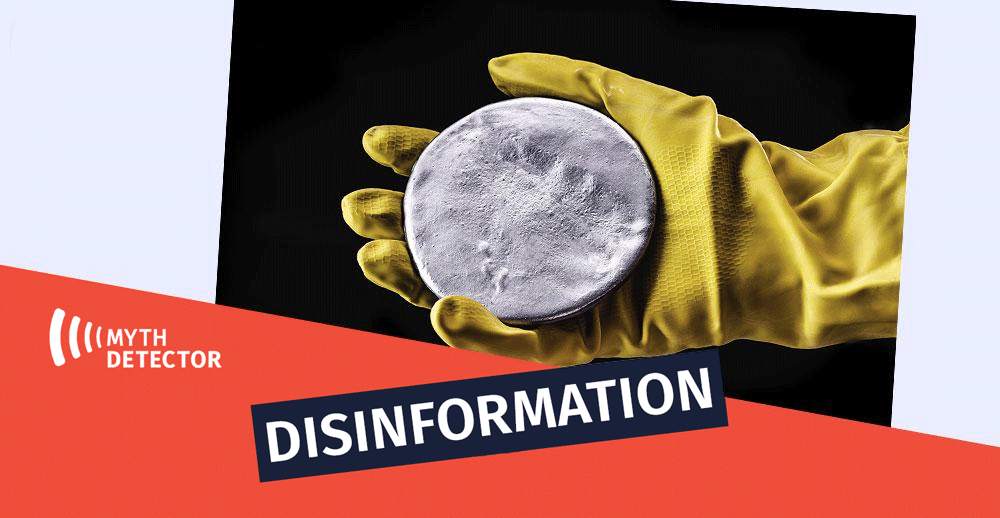 On April 3, Facebook user Zurab Kumsiashvili published a post, claiming that there is an important uranium-238 deposit in Rioni Gorge and that bridges and roads are being built to get to that deposit. Kumsiashvili also noted that thorium produced through uranium fission can be used as fuel for cars that is the key reason behind the Turkish Ambassador’s “selfless efforts.” 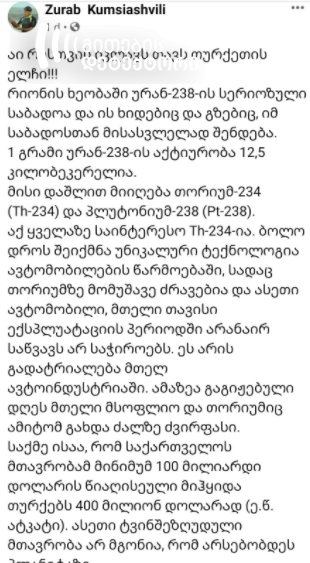 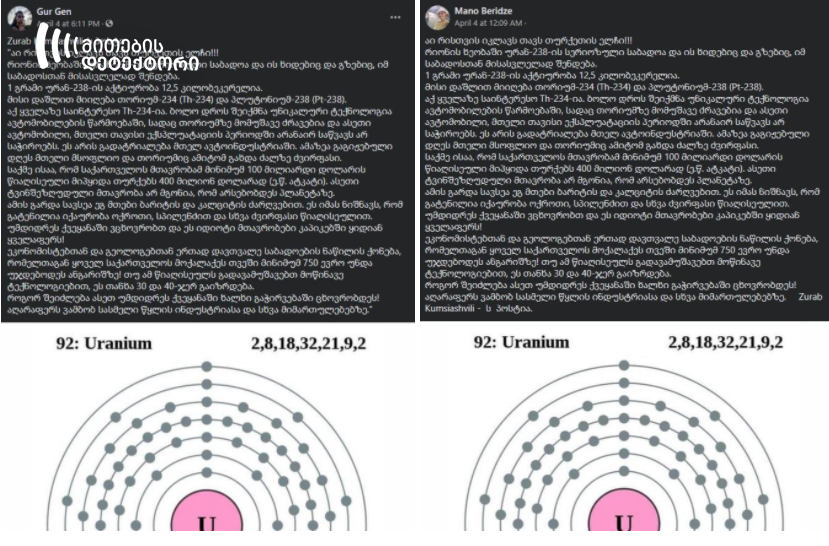 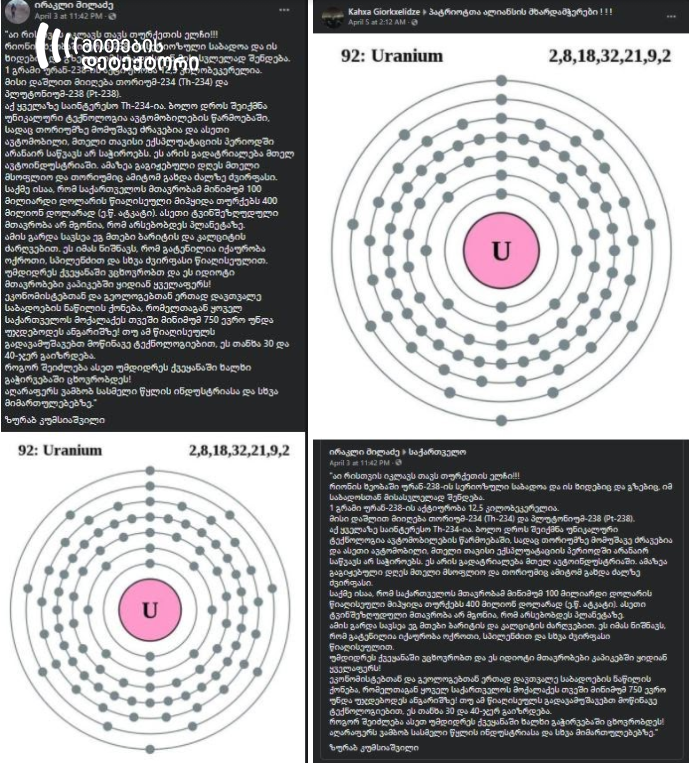 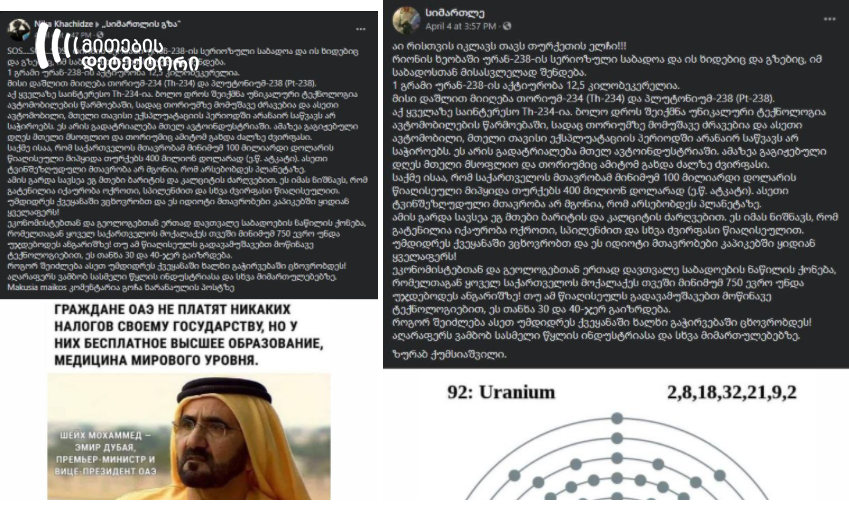 On April 9, Facebook user “ტამპლიერი ციტადელის მცველი” (Templar Citadel Guard) shared a post to public group “დიდება ერს სიკვდილი მტერს” (Glory to Nation, Death to Enemy), referring to Georgian politician Teimuraz Shashiashvili’s TV comments, according to which there is a uranium-238 deposit in Rioni Gorge, which was handed over to the Turkish company under the Namakhvani HPP construction project in frames of which the latter will be able to carry out mining operations there. The author of the post adds a link to Shashiashvili’s comments, where the latter says: “Scientists said: There is a uranium-238 deposit in Rioni Gorge. I dubbed it as “scientists’ opinion” and they felt resentful, saying that it is not an opinion, but rather a fact. There is the uranium-238 deposit there and thorium-234 can be produced through its fission. There are four countries in the world: Russia, Australia, Mongolia, where it was found three years ago, and now Georgia. It appears that everybody knows about it and we are clearing up the question right now…” 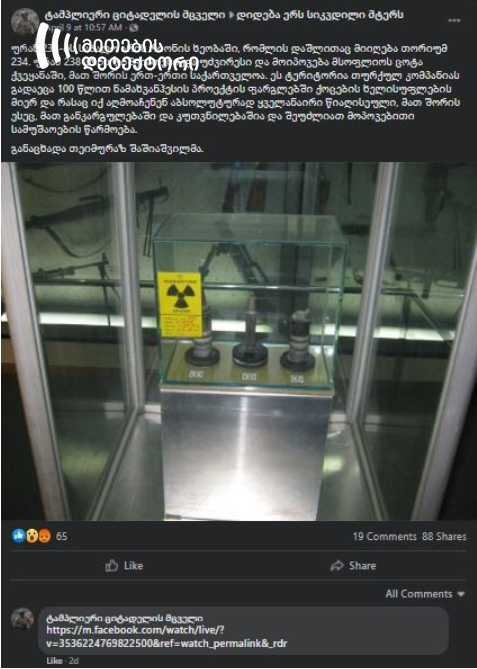 information as if there is the uranium-238 deposit in Rioni Gorge is false. Myth Detector reached out to the National Agency of Mines, where the information was denied. Shashiashvili voices false claims when he says that uranium-238 is extracted only in three countries. Furthermore, the information about vehicles using thorium as fuel cannot be confirmed by any reliable source.

The information about the existence of uranium-238 deposit in Rioni Gorge is false. Myth Detector reached out to the National Agency of Mines, where we were told that geological materials accumulated in the geological funds involve no information about the existence of the uranium-238 deposit on the Namakhvani HPP construction site. Existence of a barite-calcite deposit has been confirmed in the village of Mekvena near the Namakhvani HPP construction site. However, barite reserves have been depleted and its exploitation was ceased in 1992. The agency also noted that there are other licensed facilities in the gorge involved in extracting sand, gravel and other mines. 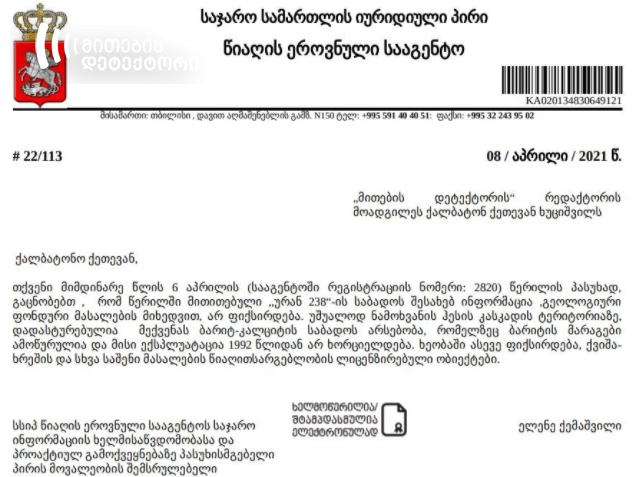 According to the Order by Georgian Minister for Environmental Protection and Agriculture, the Agency of Nuclear and Radiation Safety was established in 2015 tasked to issue licenses for nuclear and radiation activities and prevent illegal mining. Moreover, the Agency is in charge of recording, analyzing and controlling nuclear material, as well as submitting relevant information to the International Atomic Energy Agency. Thus, extraction of nuclear material on the territory of Georgia without having a relevant license or bypassing relevant procedures is inadmissible.

As for uranium-238, it is the most common isotope of uranium found in nature, with a relative abundance of 99%. After enrichment, it is used in nuclear reactors. According to the World Nuclear Association, as of 2019, 13 countries were producing uranium. Over two-thirds of the world’s production of uranium from mines is from Kazakhstan, Canada and Australia

Additional information about uranium production is available at Storymaps:

As for the claim as if thorium produced through uranium fission can be used as fuel for cars, no such information can be found on official websites of automobile manufacturers or websites of reliable news agencies. According to the article released by the World Nuclear Association in November 2020, extracting thorium’s latent energy value in a cost-effective manner remains a challenge, and will require considerable research and development investment. It is noteworthy that Turkey is ranked 6th by potential thorium reserves in the world. The country also has uranium reserves, but no production takes place at this point.