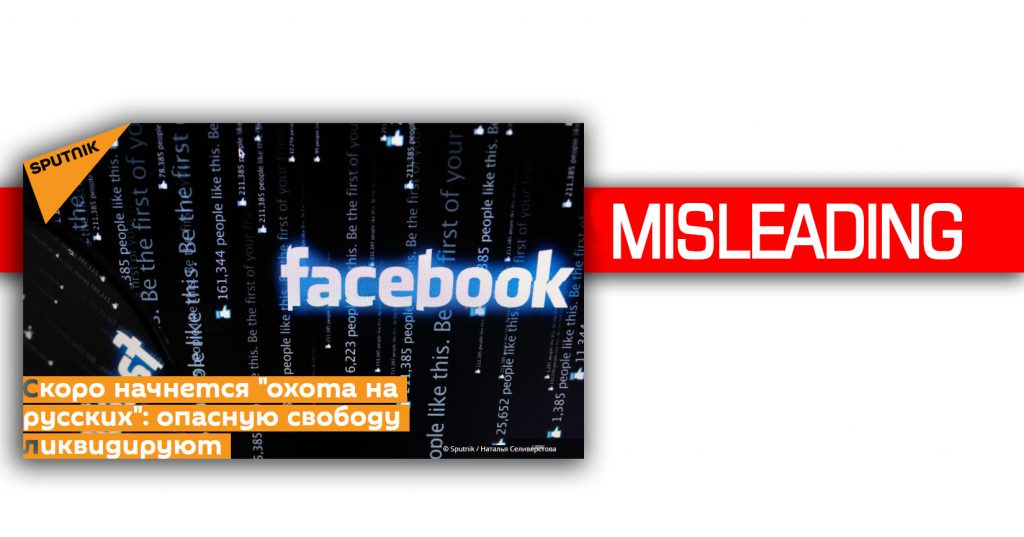 On June 28, Sputnik-Abkhazia published an article titled “Soon, the ‘Hunt on Russians’ Will Be On: Dangerous Freedom Will Be Extirpated”.

This article, written by Viktor Marakhovsky, mentions that Facebook will soon follow Twitter’s example and mark “potentially harmful” content. According to the author, Mark Zuckerberg, the founder of Facebook, had to tighten the censorship, because he fell under a great pressure due to the new moral panic, which covered the leading world.

The article mentions that the West faces a new reality – an ideology, that Marakhovsky refers to as “safetyism”. The given ideology envisages being safe/secure from everything, including traumatic, offensive, hostile words and facts. He also added that this ideology gained important meaning, finances, and potential and can carry out a high-level censorship on Facebook and Twitter through “problem content” committees. Such opportunity is very attractive for the Western elites, not to mention the United States, where the censorship is crucial against the background of the upcoming election.

In other words, the Sputnik-Abkhazia article underlines that the given ideology is increasingly used to carry out an excess censorship, which can be clearly seen from the boycott, imposed by up to 90 large advertising and other companies on Facebook.

According to the article, the given trend is worrisome for Russia, as the Western powers will be able to control Russian social and information network. If the Russian Government does not want it to happen, it needs to protect itself from the censorship and the ideologization of its internal reality from the Western truth arbiters, and the sooner the better, because a hunt on “Russian homophobic trolls” will be launched in the Russian information network and the “pro-Russian, therefore, problematic” accounts will be blocked, claims Sputnik-Abkhazia.

Sputnik’s given article is misleading, because it is incorrect that Facebook’s function to mark “potentially harmful” content targets any specific country – Russia and Russians, in this case.

In fact, Facebook stated that it would mark “potentially harmful” posts and content, but will not delete it due to a high public interest.

Facebook has been deleting content containing hate speech, and Zuckerberg cites reports by the European Commission as an evidence. According to the reports, Facebook removed more hate speech content (86%) as compared with the last year (82.6%).

Nevertheless, Zuckerberg pointed out that due to the new challenges, Facebook will block ads that considers any group a threat based on its racial or migration status. Moreover, posts containing calls for violence will also be removed – even if they are posted by politicians. Facebook will also mark content as “problematic” that do not fall under the aforementioned criteria and are not subject to deletion. “A handful of times a year, we leave up content that would otherwise violate our policies if the public interest value outweighs the risk of harm,” Zuckerberg said.

It is noteworthy that Facebook was targeted by the Kremlin’s disinformation in the beginning of this month as well, when it was accused of censoring media and controlling the public after it stated that it would mark those media outlets that are fully or partially controlled by governments. Such marking aims to increase the transparency of such media outlets. It has been assigned to Russia’s Sputnik, as well as other governmental media outlets, such as the Iranian Press TV and the Chinese Xinhua News.