Information as if Zaqatala Treaty with Azerbaijan Expires is False 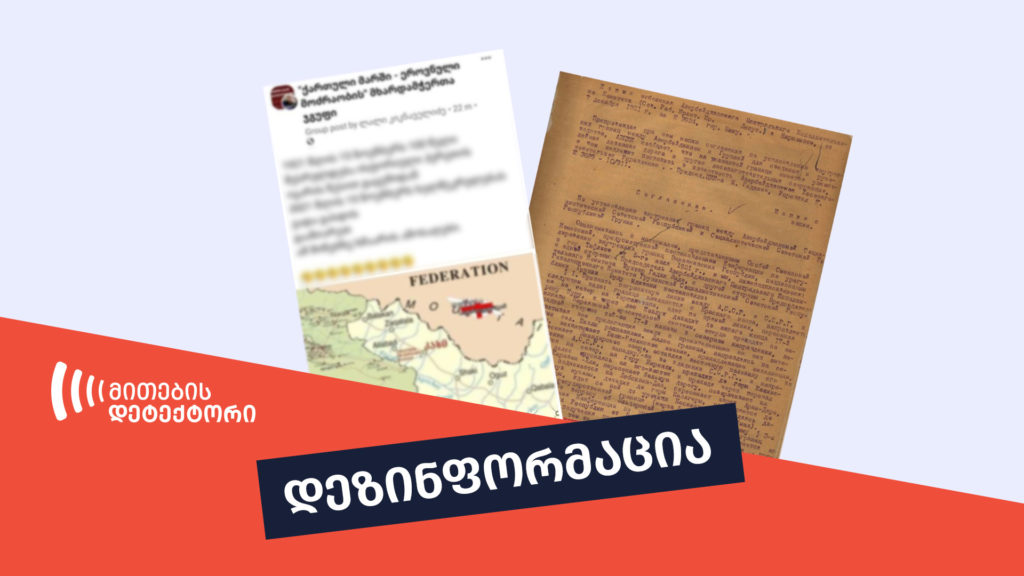 On February 6, Facebook user Lali Kiknavelidze published a post to two public groups “ქართული მარში – ეროვნული მოძრაობის” მხარდამჭერთა ჯგუფი (Group of supporters of Georgian March – National Movement) and “2012″ ერთად ავიხდინოთ ქართული ოცნება !!!!!!!! (“2012” Let’s make our Georgian dream come true together!!!!!!), according to which the lease agreement concluded between Georgia and Azerbaijan on Georgia’s historic Hereti region expires on November 15, 2021. The post calls for speaking out about these lands. It is noteworthy that the post spread by Lali Kiknavelidze in 2021 exactly repeats the post shared by Facebook page „დადუმებული ქართველობა” (Silent Georgians) on October 26, 2018:

“100 years will pass on November 15, 2021 since handing over historic Hereti under the lease agreement

We should speak out about these lands.” 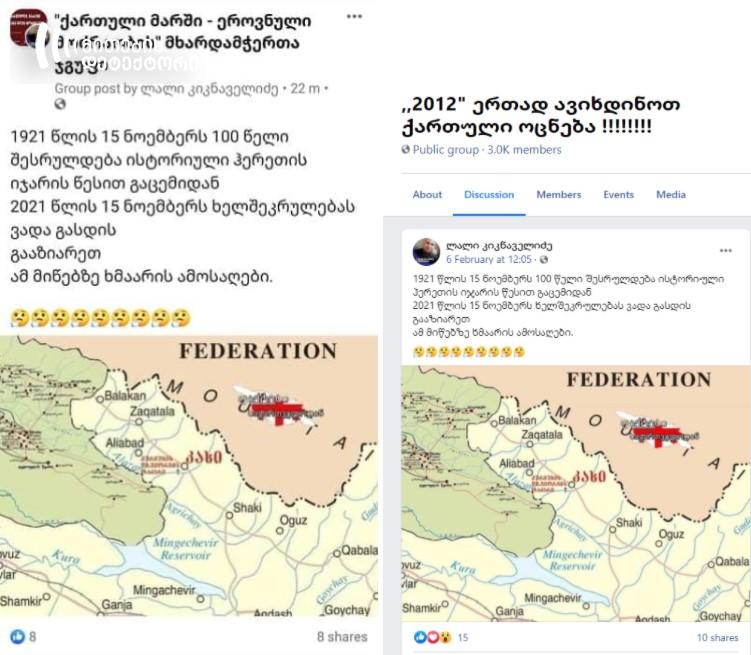 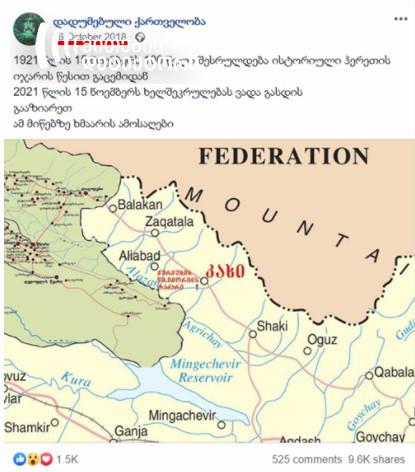 The post published to the group Georgian March was later removed.

Similar conspiracy theories about expiration of the treaties concluded with Turkey, leading to the revision of territorial claims, were previously spread in connection with the Treaty of Kars.

Zaqatala district, the same Saingilo, was a disputable territory between Georgia and Azerbaijan in 1918-1921. On November 15, 1921, Budu Mdivani, chairman of the Revolutionary Committee (Revkom) of the Georgian Soviet Socialist Republic, and Mukhtar Gaji-Zade, chairman of the Central Executive Committee of the Azerbaijani Soviet Socialist Republic, signed the agreement on determining the borders between Azerbaijan and Georgia. According to article 3 of the agreement, the issue of Zaqatala would be resolved by paragraph 4 of the July 5, 1921 decree. 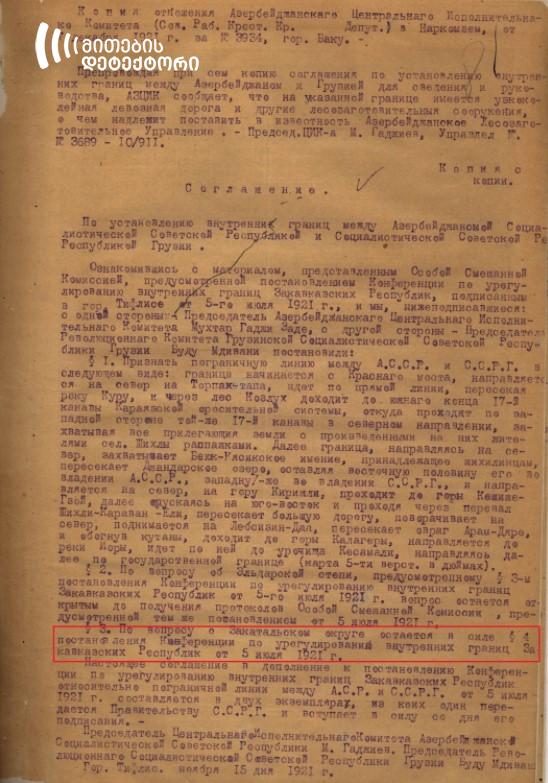 Under the treaty of May 7, 1920, Russia recognized Zaqatala as part of Georgia. However, later on May 12, amendments were made to articles 3 and 4 of the treaty signed on May 7, as part of “additional agreement (p.338).” According to the amended treaty, Zaqatala district was again declared as a disputable territory and the commission led by a Russian representative was entitled to solve the issue of its assignment.

According to article 2 of the treaty, Georgia and Soviet Azerbaijan were banned from bringing additional troops to Zaqatala district, whereas the troops of the Russian Soviet Federative Socialist Republic remained in Zaqatala until Soviet Russia’s occupation of Georgia in February 1921.

In February 1921, Soviet Russia violated the Treaty of Moscow signed on May 7, 1920 and invaded Georgia. In March 1921, the Russian-Georgian war ended with the occupation of the Democratic Republic of Georgia.

According to paragraph 4 of the decree signed by Philippe Makharadze and Nariman Narimanov at the conference on regulation of internal borders of Transcaucasus republics held in Tbilisi in July 1921, Georgia officially ceded Zaqatala district (p.13).

Just this decree became the basis for the border agreement signed between Azerbaijan and Georgia on November 15, 1921, under which Zaqatala officially became part of Azerbaijan.

The information about expiration of the Georgian-Azerbaijani treaty in 2021 was first published by Facebook user Daniel Kuloshvili on July 2, 2018 (the content is no longer available). 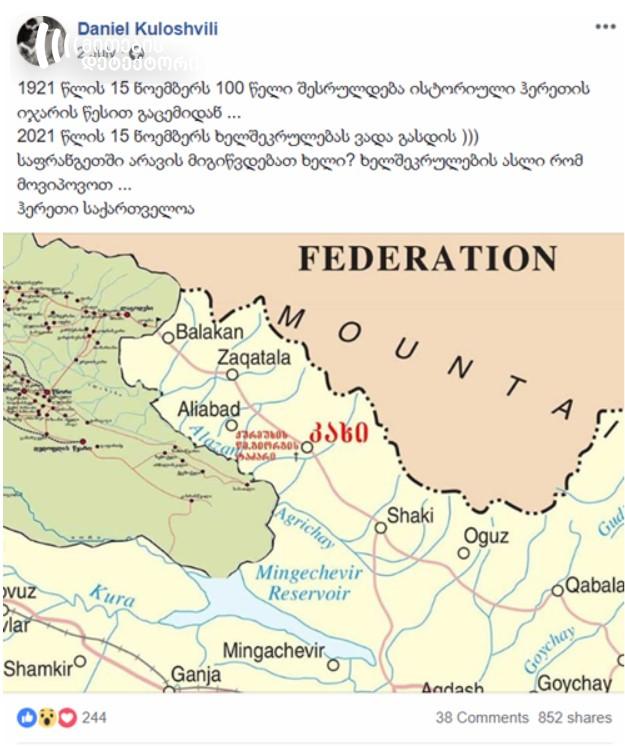 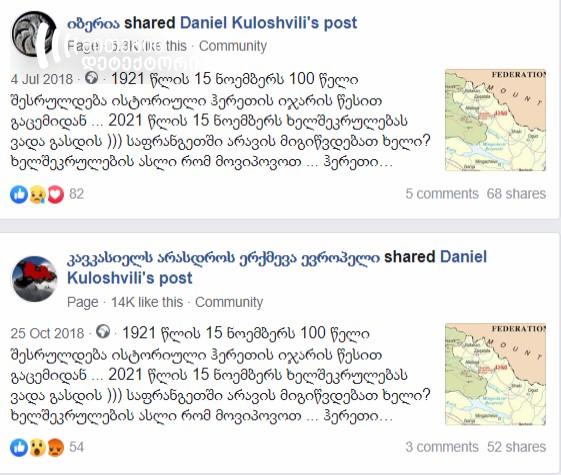 Later the same day, Kuloshvili’s post was spread on intermedia.ge.

On April 21, 2019, when Azerbaijani border guards closed access to the Udabno monastery of David Gareji Monastery Complex, ultranationalist Facebook pages resumed spreading of fake news, according to which the agreement concluded with Azerbaijan would expire in November 2021. 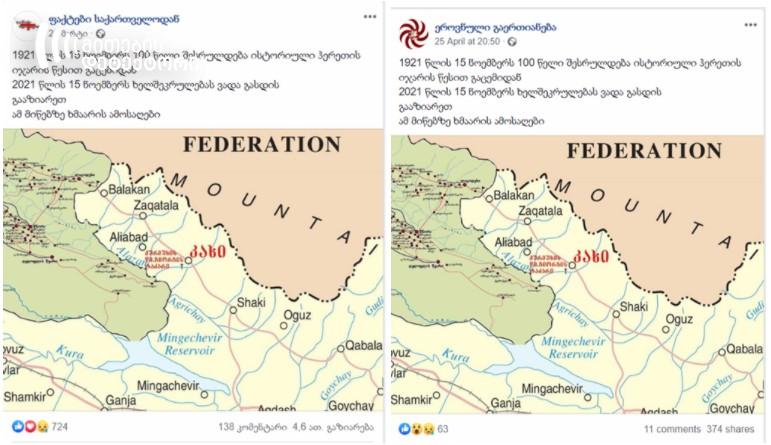 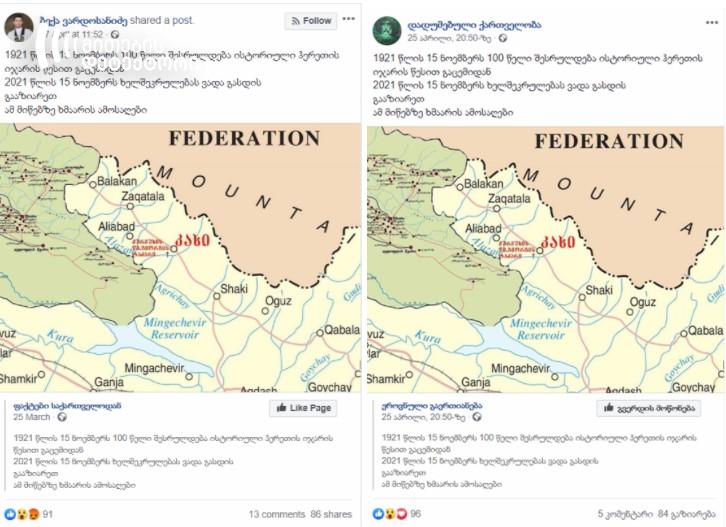 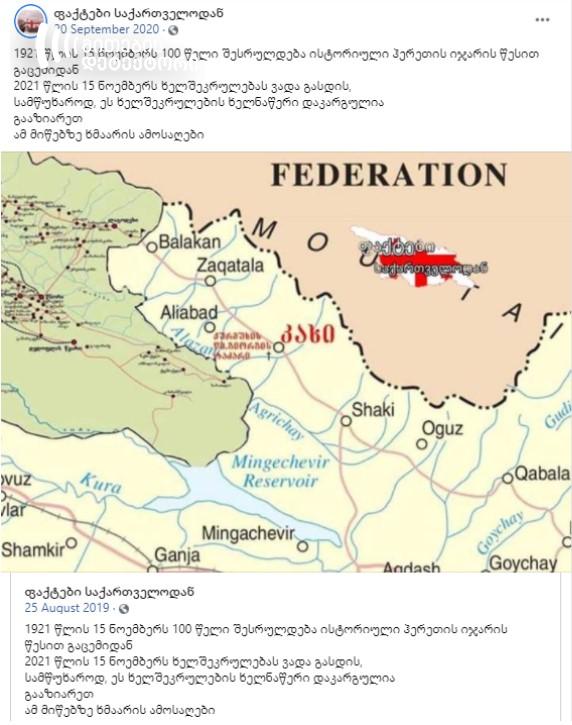