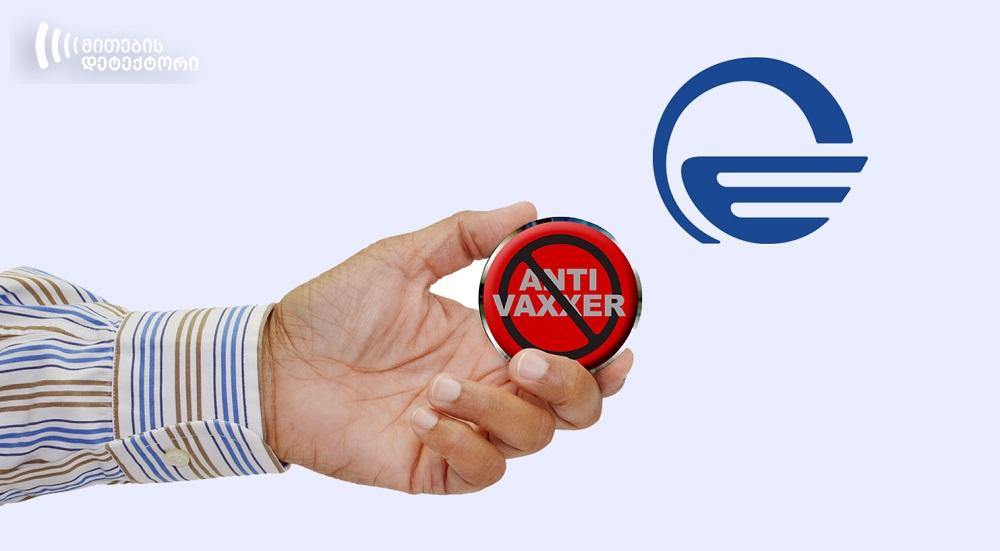 On April 21, Imedi TV aired a program Prime Show dedicated to the issue of COVID-19 vaccines. Anti-vaxxers, infectious disease doctors and other medical specialists were invited to the program to assess the benefits of COVID-19 vaccines. A fragment of the program from 5:18 minute, where Georgian homeopath Tina Topuria speaks about vaccines, was posted on Imedi TV’s Facebook page with the following caption: “’These vaccines are experimental and their trials will be completed in 2023.’ Doctor of Medical Sciences, Tinatin Topuria.” The video fragment was cut out from the full program and it involves only Topuria’s opinions who claims that according to animal trials, COVID-19 vaccines affect fertility. To back up her words, Topuria claims that a doctor has to ask a person who is being vaccinated whether she is pregnant or plans to get pregnant in the near future. Tina Topuria also claims that COVID-19 vaccines are experimental and they will get qualification only in 2023. 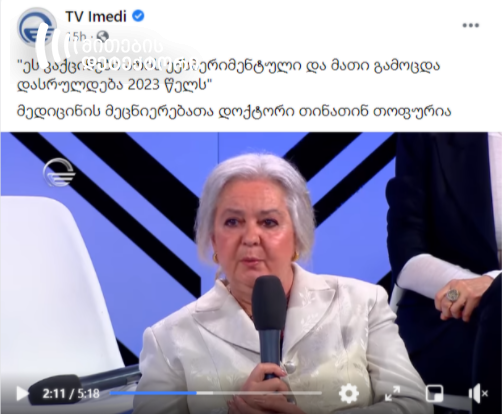 The initial post involving Topuria’s remarks had 4,346 likes and over 6,200 shares. Later, Imedi TV edited the initial caption of its Facebook post stressing that Tina Topuria spreads disinformation and neither are the vaccines experimental, nor do they affect fertility. The fragment of the video, however, remained unchanged. After editing the post, the TV channel did not indicate that the initial version involved the controversial opinions by one source only. 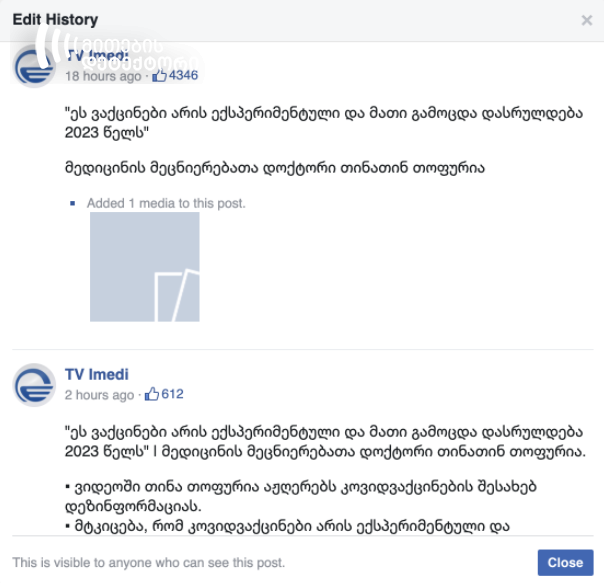 the video fragment posted by Imedi TV, Tina Topuria spreads two false claims; but in fact: 1. COVID-19 vaccines, which have already been granted the WHO and FDA authorization, are not experimental and they have passed through all phases of trials, showing high efficacy. 2. Authorized COVID-19 vaccines do not cause infertility. The fragment of the video, unlike the full program, does not provide either any fact-based information or arguments by medical specialists that would annul the statements made by anti-vaxxers.

The fragment of the video shared by Imedi TV to its Facebook page involves only Topuria’s comments, neglecting the arguments of other guests also invited to the TV program and featuring in its full version. Thus, the video fragment is unbalanced and does not provide alternative information to debunk Tina Topuria’s anti-vaccination remarks. The caption of the post involves Topuria’s quotes, but later it was updated to note that Topuria spreads disinformation about vaccines. However, the users who liked or shared the post, were not informed that the text had been edited. Neither does the text note that the initial version has been edited.

In Imedi TV’s full program, Temur Mikeladze, doctor and associate professor, responds to Topuria’s claims, saying that about 300 COVID-19 candidate vaccines have been created throughout the world and precisely these vaccines are presently undergoing experiments. As for the authorized vaccines, Mikeladze said that they have been recognized by the World Health Organization (WHO), U.S. Food and Drug Administration (FDA) and European Medicines Agency (EMA). Thus, these vaccines are not used for experiments. As for Topuria’s remarks related to fertility, Temur Mikeladze stressed in response that the technology used in creating the coronavirus vaccine is not new and that vector vaccines were created 10-12 years ago, while mRNA vaccines have been used to treat cancer patients for years.

What is the difference between authorization and approval?

As of today, FDA has granted an Emergency Use Authorization (EUA) to three vaccines: Pfizer, Moderna and Janssen (Johnshon & Johnson). Although none of these vaccines have been approved so far, the emergency use authorization does not call vaccine safety into question, because it does not affect clinical trials and the studying of sides effects. Instead, it speeds up manufacturing and administrative processes. All vaccines follow the same testing processes, whether they are approved for emergency use or through a typical license. Clinical trials are conducted in three phases. Once phase 3 trials are complete, the FDA reviews the data to determine whether the vaccine works and is safe. If so, the manufacturer files for approval. In a public health emergency, such as the COVID-19 pandemic, manufacturing may occur while vaccines are still in development, rather than after approval. These efforts happen simultaneously, and instead of filing for a Biological License Application (BLA), the manufacturer files for Emergency Use Authorization. According to FDA, an EUA is granted to a vaccine only if phase 3 trials prove its efficacy.

Tina Topuria claims that some animal trials have revealed that the COVID-19 vaccine affects fertility. She also noted that according to the guidelines, doctors have to ask patients a question before vaccination whether they are pregnant or plan to get pregnant.

In fact, animal trials conducted on FDA-authorized vaccines have revealed no risks either before pregnancy or during pregnancy. Vaccine manufacturers are closely monitoring information about those people who got vaccinated and then got pregnant. It is noteworthy that pregnant people have not reported different side effects from non-pregnant people after vaccination with mRNA vaccines. Vaccines that use the same viral vector have been given to pregnant people in all trimesters of pregnancy, including in a large-scale Ebola vaccination trial. No adverse pregnancy-related outcomes, including adverse outcomes that affected the infant, were associated with vaccination in these trials. In addition, Australian Government’s Department of Health reported that there is no evidence that infertility is a side effect of any vaccine.

A myth related to fertility went viral last December and it was largely promoted by an opinion that there is a certain similarity between the spike-protein of the coronavirus and the so-called syncytin protein that could result in antibodies against coronavirus blocking syncytin and leading to infertility. In fact, the similarity between spike-protein and syncytin protein is not enough to cause the so-called cross-reaction of antibodies. Myth Detector has published an article by Giorgi Kamkamidze, an immunologist, where he provides detailed explanations about the issue. The myth about fertility built on the similarity between spike-protein and syncytin protein has been debunked through studying the COVID-19 cases, as the development of such cross-reaction must have been due to antibodies produced after infection. The researchers, however, claim based on the U.S. statistics that the pandemic has not caused any fertility problems.

As for freezing sperm before getting vaccinated, Tina Topuria has voiced the same information in the interview with Obieqtivi TV. Noteworthy that neither vaccine annotation nor the regulator’s statements contain any recommendation about sperm freezing. See details in Myth Detector’s article:

Georgian homeopath Tina Topuria is an active anti-vaxxer whose fake reports have been verified by Myth Detector on multiple occasions. Topuria’s anti-vaccination messages were also included in the report Infodemic 2020 released by the Media Development Foundation (MDF). It is noteworthy that amid general anti-vaccination sentiments and the spread of conspiracy theories, Tina Topuria is known for her loyal attitude towards Russia’s Sputnik V COVID-19 vaccine. This is largely confirmed by her comments published by Georgian tabloid Asaval-Dasavali.