How Soviet Propaganda Used Racism against the United States 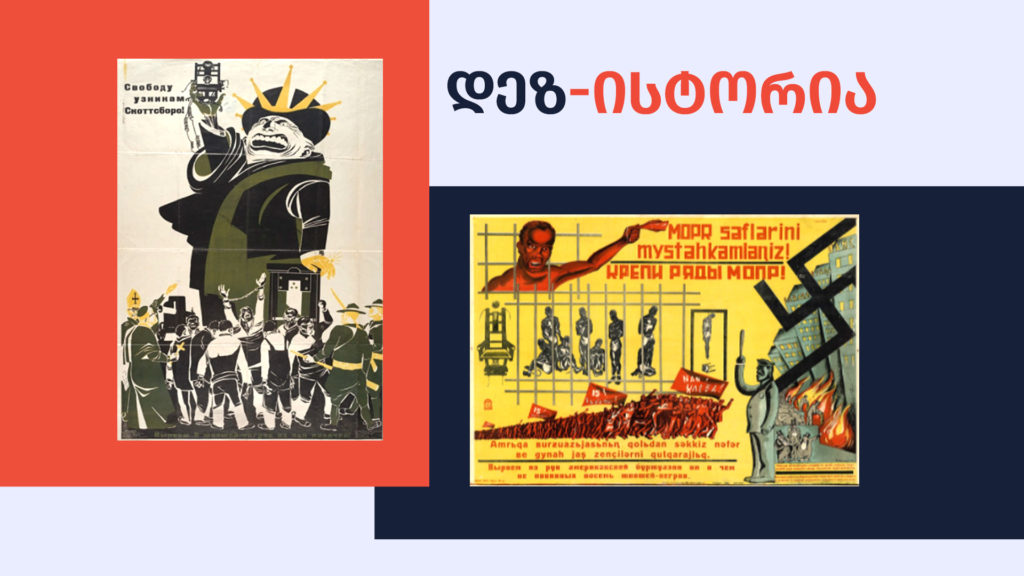 According to the U.S. Senate report, Russia used social media during the 2016 electoral campaign to influence voters and conduct an information warfare campaign designed to spread disinformation and societal division in the United States. The document reads that Russia mostly targeted the issues such as race, immigration, and Second Amendment to the U.S. Constitution (the right of the people to keep and bear Arms). According to the report, over 66 percent of Facebook advertisement content contained a term related to race and was targeting African Americans. Russia was doing its best to trigger racial confrontation and incite a conflict among American voters. 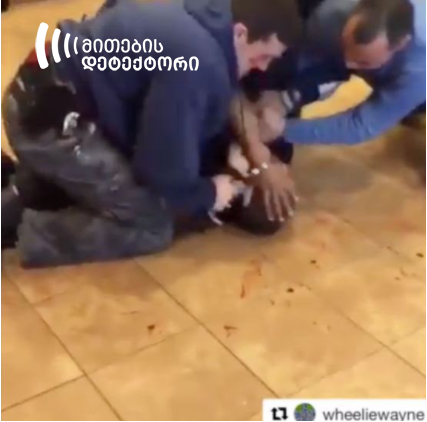 One of the footages spread in that period by a Facebook account Blacktivist affiliated with Russian intelligence services, showing violence against an African American

It is worth noting that Russia did not start manipulating this issue in the 21st century and the same method had been used since early years of the establishment of the Soviet Union, though its forms were quite different.

Although such actions by the Soviet Union and then Russia do not justify the racial side of the American history, such propaganda actions did not give the USSR, which had been engaged in genocides and massacres, a moral superiority it strived to gain.

The idea of such state emerged in the Soviet Union back in the 1920s. Unlike 2016, the key goal of that period was to split the entire United States, not the societies, and what is most important, it should have occurred on racial grounds. By 1930, the Comintern – the Communist International, whose mission was to spread the communist revolution around the world – decided to recruit Southern blacks and push for “self-determination in the Black Belt.”

The ultimate goal of this plan was to spread communism to North America with the Soviet Union spending a lot for this purpose. It is noteworthy that Comintern approved a $300,000 fund for propaganda purposes in Black America, and key African-American leaders and communist sympathizers were invited to the Kremlin to meet with Lenin and other Soviet officials.

One of those invited to Moscow was African American poet Claude McKay and Lovett Fort-Whiteman, a Harlem bellman turned political activist whom Time magazine called “the Reddest of the Blacks.” These persons were trained in Moscow and the USSR was sparing no efforts to realize the idea of a Southern State or at least to incite a conflict in America. It is noteworthy that many Black activists, who arrived in the USSR for this purpose, turned into the Soviet Union’s victims, including Whiteman who died as a prisoner in a Soviet gulag. The USSR deemed him as an unreliable person and resettled him to Siberia. Whiteman was frequently unable to meet work quotas and was punished with beatings. 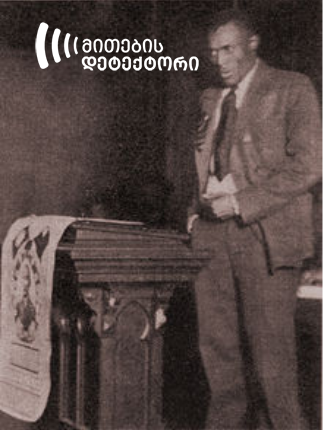 According to one declassified FBI document, the Soviet Union was motivated not by the desire to improve the status of the Negro, but to exploit legitimate Negro grievances for the furtherance of communist aims. Eventually, black people living in the South would combine forces with communists living in the North in a sort of Communist pincher movement to produce a Soviet state inside North America.

The Soviet Union seized on the incidents that occurred in the United States on racial grounds to use them for its propaganda purposes.

The Soviet Union was actively trying to demonstrate its “moral superiority” to American people, using various racial incidents for this purpose. One of the Soviet campaigns involved the incident that took place in Scottsboro, where nine black teenagers were accused of raping two white women and sentenced to death. Although the case files contained no evidence to prove the boys’ guilt, the racist judiciary did not care about it.

The Soviet propaganda used such cases for its own benefit with the Soviet Union positioning itself not only as a workers’ utopia, but as a racial utopia as well, an important and successful state in protecting civil rights. A lot of posters and cartoons were created in that period to achieve this goal. 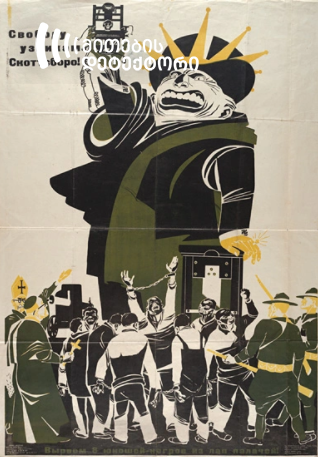 “Freedom to the Prisoners of Scottsboro”

One of the cartoons “Freedom to the Prisoners of Scottsboro” belongs to Dmitri Moor, a famous Soviet propagandist. The American Communist Party was also actively involved in the propaganda processes.

It is noteworthy that the propaganda of that period aimed at promoting the idea among American people regarding the establishment of the Southern Autonomous State. 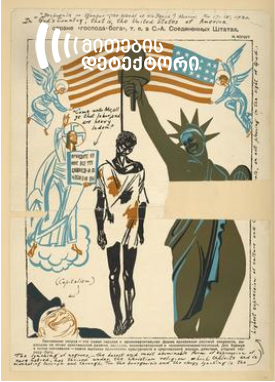 A lynched Negro (magazine called “The Godless at the Workbench”) 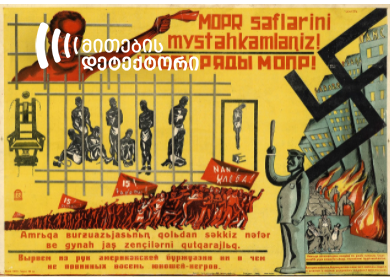 During the Cold War, manipulating the issue of racism along with other issues (religion, ethnicity) became more relevant. The USSR mainly used the same methods as previously, but more actively. Soviet media was actively involved in the propaganda campaign. Two examples of propaganda can be discussed:

One of the opinions promoted by the USSR aimed at criticizing capitalism. The Soviet Union was actively spreading an opinion that capitalism provided a natural environment for racism and that it could not be eradicated due to its laws and system. According to some other arguments, the American system needed cheap labor that was again achieved due to the capitalism. The Soviet Union offered Americans communism as a solution.

It should be noted that racism as the result of capitalism was named in the U.S. Intelligence Agency report as one of the propaganda reasons; however, three other themes were also outlined: 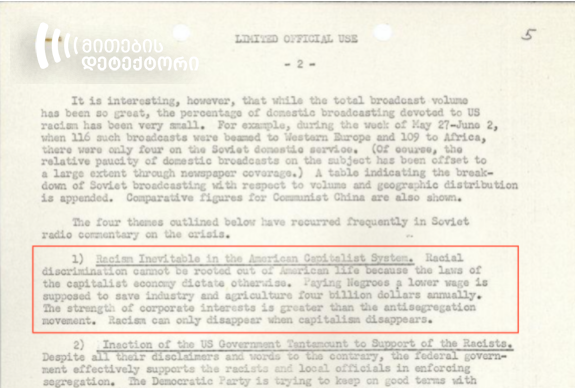 A fragment from the 1963 U.S. Intelligence Service report where the Soviet Union interlinks capitalism and racism.

The incident related to the Little Rock School was one of the important parts of racial crisis in the United States. In 1957, Governor Orval Faubus called in the Arkansas National Guard to block the black students’ entry into the high school, although in 1954, Supreme Court ruling declared segregation in public schools unconstitutional. Later, President Dwight D. Eisenhower sent in federal troops to escort nine students into the school. 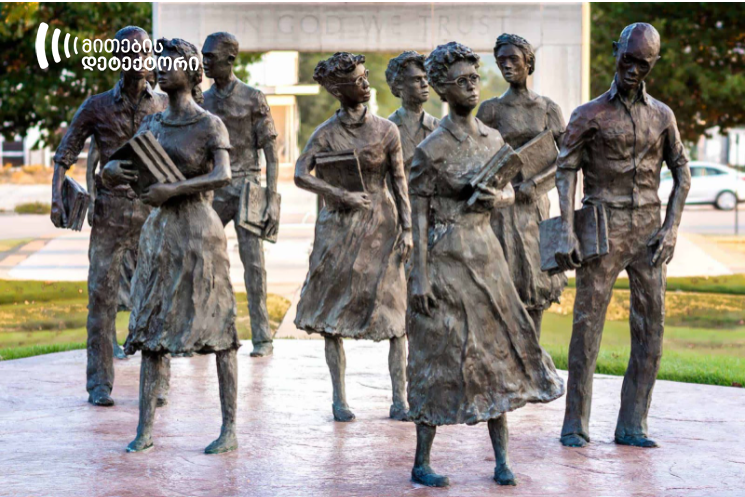 A memorial to the Little Rock Nine

The Soviet Union seized the opportunity to intensify anti-American propaganda on racial grounds. Although in that period the Soviet Union was responsible for a lot of crimes committed against Eastern European states and their citizens, it still tried to demonstrate “moral superiority” through anti-American attacks.

“Troops Advance against Children” – this is how Komsomolskaya Pravda headlined the article covering the incident. Another Soviet newspaper Izvestia wrote about façade American democracy. By this, the Soviet Union strived to portray the Western system as a bad and unacceptable alternative.

To summarize the above-mentioned examples, during the Cold War and before, the Soviet Union always used the tactics known as “whataboutism” in the polemics against the United States regarding the issues of human rights violations with racism being the main topic. “Whataboutism” is a device that involves accusing others of offenses as a way of diverting attention from one’s own deeds. Such diversion was frequently accompanied by pre-planned propaganda campaigns.

Whenever the Soviet Union was criticized for its human rights abuses, the rebuttal became, “And you lynch Negroes.” Although the Soviet Union no longer exists, Russia never abandoned this tactic, using rare racial incidents in the United States for covering up its own actions or demonstrating its own superiority.

Although racism had been a huge problem in the United States of that period, the Soviet Union, due to its criminal actions, had no moral superiority; neither had communism been the system that would have offered happy life to Negroes or other groups.

The Soviet Union used violence not only against neighboring European states, but its own citizens as well and the reasons were different, as we talk about various ethnic groups. The Soviet Union’s attitude towards various small nations was mainly expressed in their resettlement and destruction. By Stalin’s order, a lot of groups, including Chechens, Finns, Poles, Ingush and Meskhetian people were resettled on ethnic grounds.

In addition, economic problems and famines (including Holodomor in Ukraine) that emerged in various countries of the Empire at the initial stage of the Soviet Union are also worth noting. Although the USSR used counteraccusations against capitalism, it was just collectivization divergent to capitalism that led to huge casualties caused by hunger.

The Soviet Union was also actively persecuting its political opponents, including those American black people who pinned hopes on the Soviet Union and its ideology and arrived in the USSR for this purpose. At least 750,000 people were executed during the Great Purge, which took place between about 1936 and 1938. More than a million other people were sent to forced labor camps, known as Gulags. Many Georgian public figures also fell victims to Soviet repressions.

The Soviet Union was punishing those states and nations that were trying to get rid of its sphere of influence or were criticizing it. Among such developments is the suppression of the 1956 revolution in Hungary, when the communists strictly punished Hungarian revolutionaries; also the March 9, 1956 developments in Tbilisi and Prague Spring in 1968, when the Soviet troops dispersed the rally held in Prague against the USSR.

It is noteworthy that Georgian pro-Russian, Russian-funded media outlets are trying to demonstrate the Soviet Union’s “moral superiority” over the West. See detailed information about this issue in Myth Detector’s article:
From Sharpeville Massacre to the Soviet Guilt