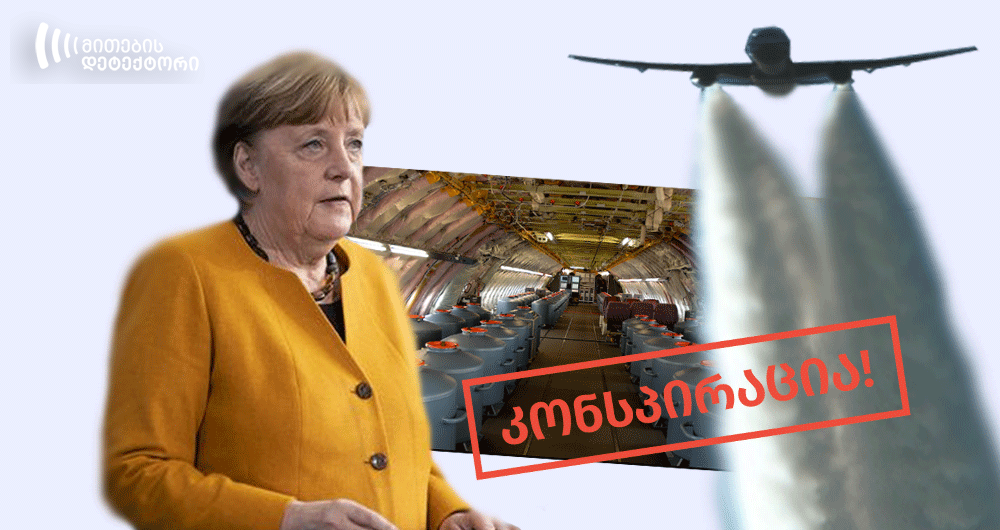 On April 25, 2021, a Facebook user Levan Navi published a post that combines 33 photos and one video. The pictures show condensation trails of planes, tanks in plane cabins, and pilots wearing a badge that says “Chemtrail”. Angela Merkel also features in the photos – she was in a cabin of a plane carrying dozens of barrels. The video, uploaded with the photos, shows a plane leaving a white trace in the sky. The main part of the video comprises the aforementioned photos. Although Levan Navi does not specify in the description, what the given visual materials show, the Russian subtitles of the video mention that the footage shows the spread of dangerous chemicals and viruses, created in military laboratories, via condensation trails of planes – all while governments and airlines are in the know. 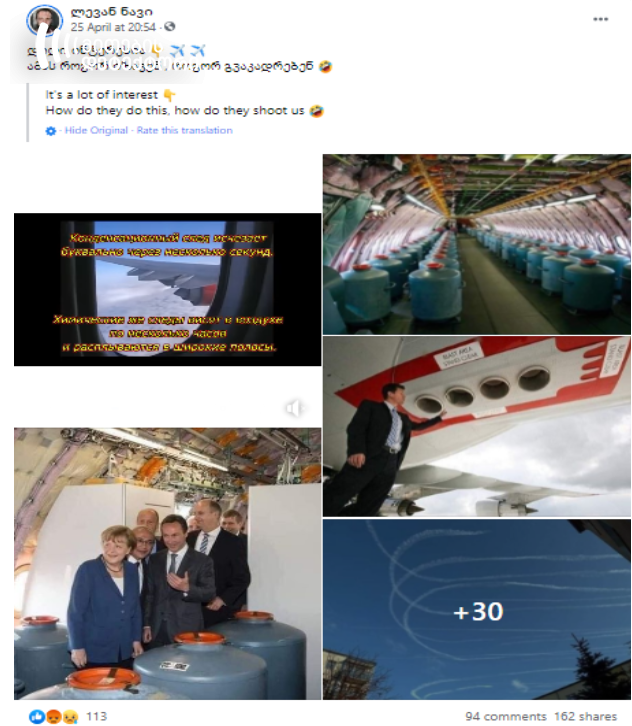 Another Facebook user Goria Shiva also published identical photos without a description on April 11, 2021. Irakli Lomidze and Rau Al, yet other users of the social media website, also wrote about the alleged spread of hazardous susbtances via condensation trails of planes. According to a Russian video, published by Rau Al, the planes are also used for spreading coronavirus besides other substances. 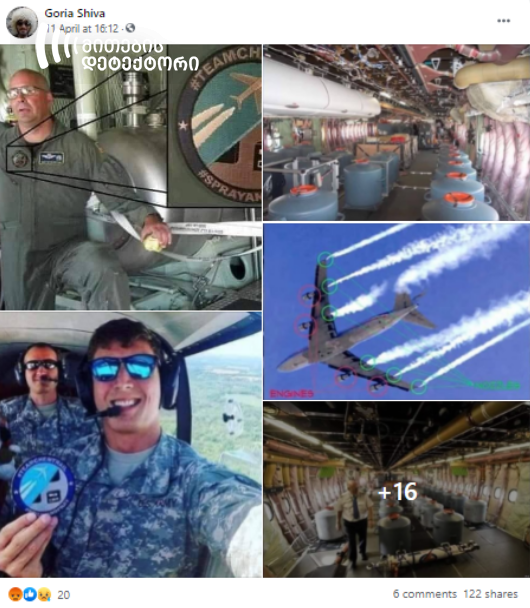 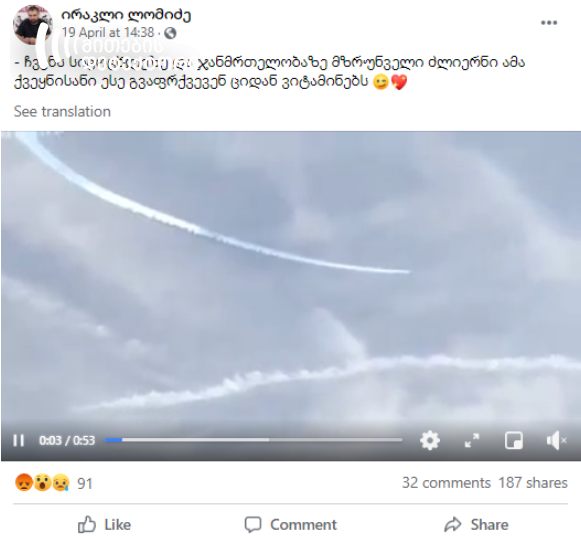 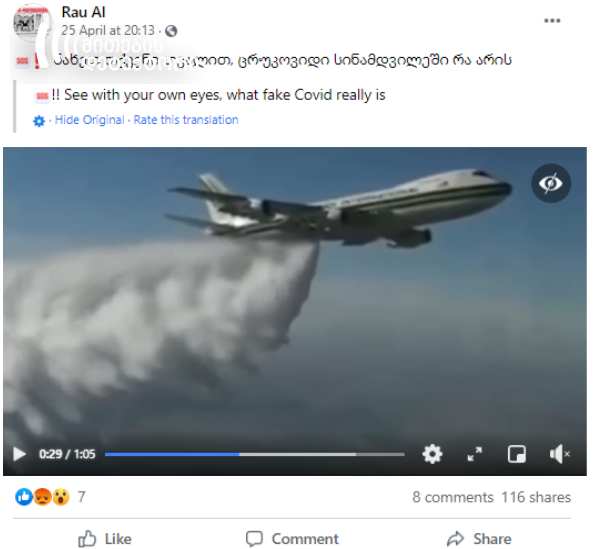 The claim that planes are used to spread hazardous substances, including the coronavirus, is a part of a conspiracy theory that has been around for years. There are no evidences confirming the said theory. The images and videos, disseminated by social media users, that allegedly show “chemtrails” (chemical trails), are fake and are disseminated in a manipulative context.

The conspiracy theory claiming that the government and various powerful groups are using planes to spread chemical substances and disease-causing microorganisms in the atmosphere has been circulating on the Internet for many years already. Various versions of the chemtrail conspiracy claim the reasons behind the alleged spread of hazardous substances via plane trails to be weather control, population decrease, and sterilization of humans. The followers of the conspiracy claim that the main “evidence” of their theory are the condensation trails (contrails) left by planes in the sky. According to them, these contrails are contaminated with hazardous substances.

In fact, the contrails are created when hot air from plane turbines is released to the environment with cold aird and low pressure. As a result of a condensation, the air is transformed to white vapor, making it visible to the eye. The thickness and intensity of the vapor can vary depending on the air temperature, pressure, turbulence, and other physical factors, but in any case, it is an outcome of a natural process and cannot be considered as a proof of a wide-scale “secret program”. There are no factual or scientific evidences showing that the vapor created by planes is contaminated. In 2016, a panel composed of 77 scientists analyzed the chemtrail conspiracy theory scientifically, but they could not find any solid evidence supporting it.

The claim that the coronavirus is disseminated using planes is also a part of the conspiracy and Myth Detector has written about it earlier. Read it in detail: Do Plane Emissions Contain Coronavirus?

What do the visual materials, published by social media users, depict?

The videos, disseminated by Levan Navi and Rau Al, show footages of planes leaving thick trails in the sky. However, as authentic contexts of the videos and photos show, they do not depict “chemtrails”, but rather ordinary condensation trails left by planes in the sky only at a certain altitude, under specific atmospheric conditions and weather. For instance, one footage from January 19, 2017 shows unusual condensation trails left by a Boeing 787 during a regular flight. Another video was taken by an airplane pilot Lou Bowyer and uploaded to his YouTube channel. The video was taken 10 km above the sea level and shows air condensation under the atmospheric conditions found at this altitude.

Another footage shows a Boeing 777-21H making a regular flight from Frankfurt to Dubai. The given image belongs to a user named Bailey – AviationImageNetwork and is included in airliners.net online catalog. The description of the original photo does not mention chemical trails. 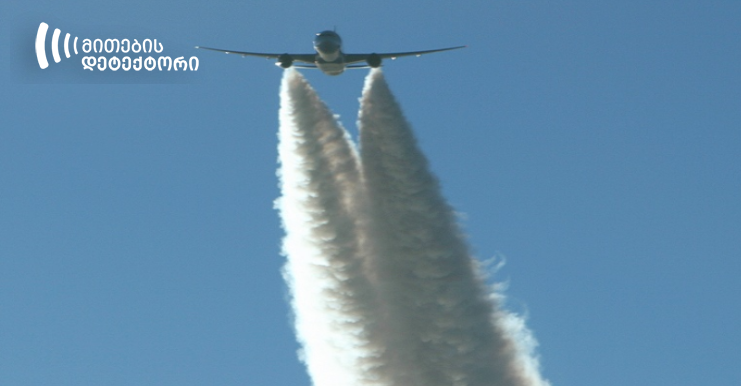 Yet another video shows Boeing 747 Supertanker which ostensibly emits some sort of spray instead of leaving the ordinary contrails. The given video first appeared on YouTube on April 10, 2013. Its description reads that it shows a drill involving emptying water tanks from planes at a high altitude. Boeing 747 Supertanker is used to fight wide-scale fires from air. 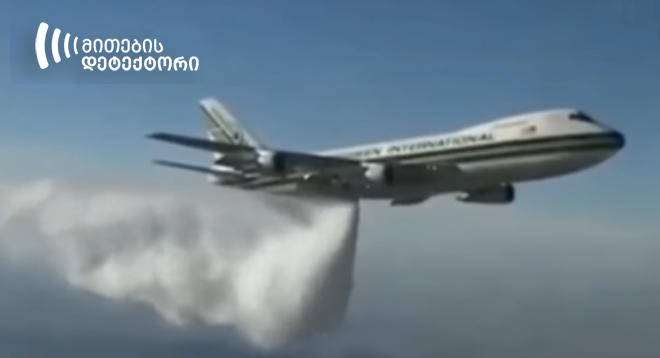 The pictures, published by Levan Navi, include a photo of one more plane, emitting vapor from the six turbines located on the wings. This photo is not connected to “chemical trails” either. The original photo was taken by NASA in 1974. It shows a Boeing 747 plane taking part in a study on turbulence trails. As NASA’s description of the photo reads, the six generators were intentionally placed under the wings of the plane in order to visualize the turbulence trails. The said study was a part of the overall NASA study of trailing vortices.

One of the photos that depicts Angela Merkel in an airplane cabin together with several other people, is especially popular among the followers of the chemtrail conspiracy theory. In fact, the photo was taken on February 20, 2014 at ILA International Air Show in Berlin – an exhibition for the aerospace and defense industries. The official website of the German Government includes several photos of Angela Merkel’s visit to the event. In the manipulatively disseminated photo, Merkel is in a cabin of a passenger plane, Airbus A350 prototype. The blue barrels are filled with water, not chemicals. They are used for simulating the passenger weight while testing the passenger planes.

Apart from the photos featuring Angela Merkel, the blue barrels also feature in other photos uploaded by Levan Navi. One of the photos includes the copyright owner in the bottom left corner – Mark-Antony Payne. The primary source of the given photo is airliners.net. According to the primary source, the photo was taken on June 18, 2009 in Paris, before a test flight of an airliner Airbus A380-841, whereas the barrels in the cabin are filled with water. 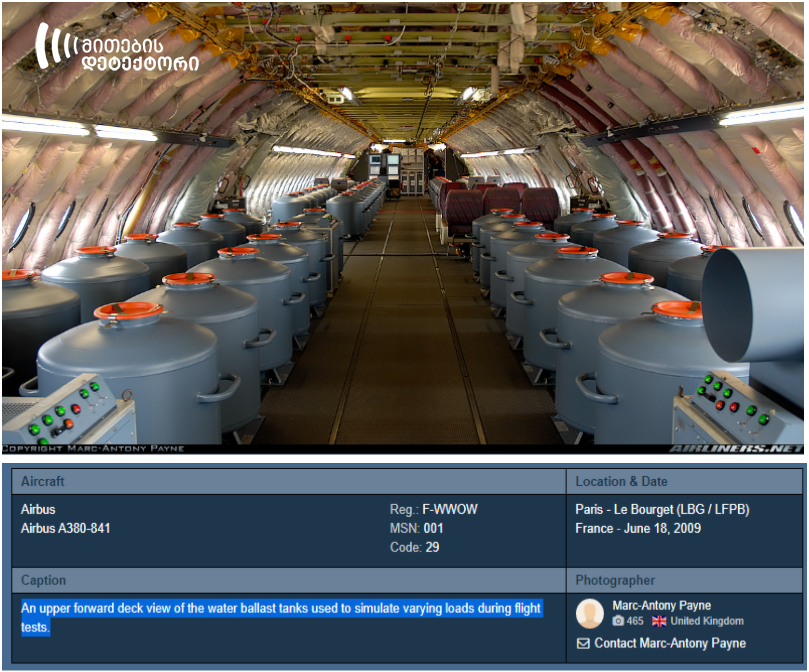 Another photo, allegedly showing black tanks with a biohazard sign in an airplane cabin, actually depicts a test flight of a Boeing 747-8JK and its original version is also available on airliners.net. The photo was taken by James Mellon on June 19, 2011 and, unlike the version disseminated by Levan Navi, the authentic image does not include the biohazard sign on the black barrels. According to the photo description, the airplane cabin was loaded with water tanks that are used to balance weight. 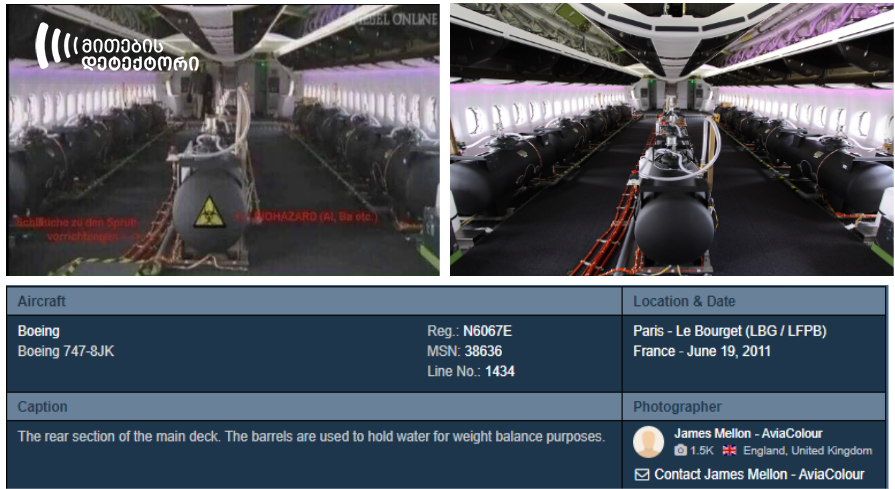 An extensive blog post on metabunk.org from June 20, 2012 includes the authentic versions of other photos and the real context of the tank-loaded planes. In the post, the author includes all photo and video materials showing the test flights of the passenger planes. Similar to the examples mentioned above, the images showing airplane cabins loaded with tanks of various shape and size depict the common practice of testing the loading capacity of the airplanes, not the evidence of “chemtrails”.

Another series of photos shows pilots wearing #TEAMChemtrail badges, composed of contrails and tombstones, on their chest. LeadStories, a fact-checking platform, verified the given photos. According to LeadStories, the photos originate from a troll Twitter account and website, created by pilots.

The Twitter account @TeamChemtrail was created at the Ramstein Airbase in Germany and usually publishes memes and jokes. As for the website teamchemtrail.com, it currently does not exist anymore, but is available via archive link. As the “About” section of the website reads, the page used to sell funny souvenirs and products connected to aviation, while its content was created for “enlightening and scaring all conspiracy theorists”. The creative group of the website was composed of pilots and flight instructors. They created the design of the badge from the widespread images.

According to a search engine TinEye, an authentic version of one of the photos, published by Levan Navi was indeed published on teamchemtrail.com and it is from one of the products which used to be sold on the website. The edited version of the photo initially appeared on punku.com on September 17, 2017. 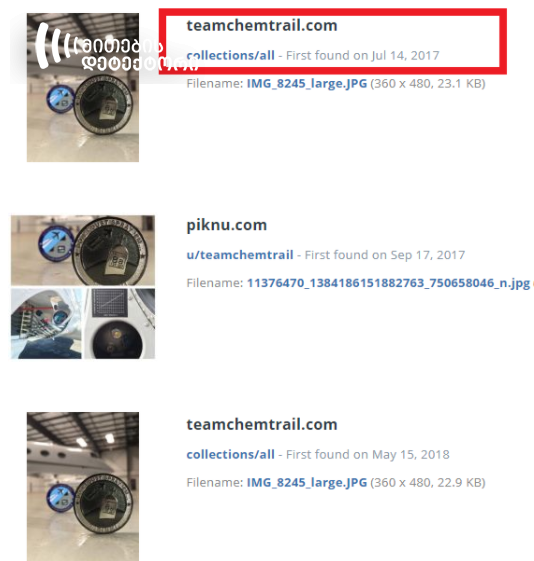 In the photos, published by Levan Navi and Goria Shiva, the pilots are wearing precisely the badges created by Team Chemtrail to make fun of conspiracy theorists. As of now, they can be purchased on a German platform flzgmbl.de for EUR 9.90.

In addition, the photo of one of the pilots wearing the #TEAMChemtrail badge has been doctored. The authentic version of the given photo appeared on a personal blog “in the valley” on September 7, 2008. In the blog post, the author tells about his journey to Great New England Air Show at the Westover Air Reserve Base (USA) and attaches photos to his story. The photos include the one with the pilot from the conspiracy photos. However, his badge displays the Great Seal of the United States, not the #TEAMChemtrail logo. 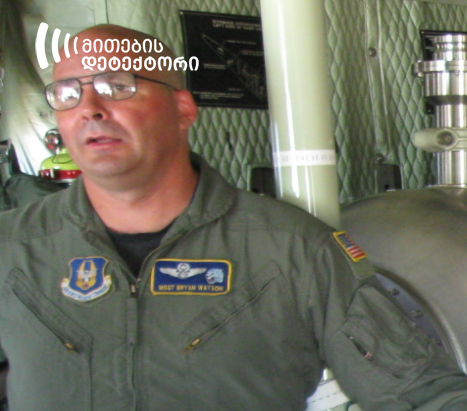 The doctored version of the photo was initially disseminated under the chemtrail conspiracy context by a Flicker user on October 24, 2014. 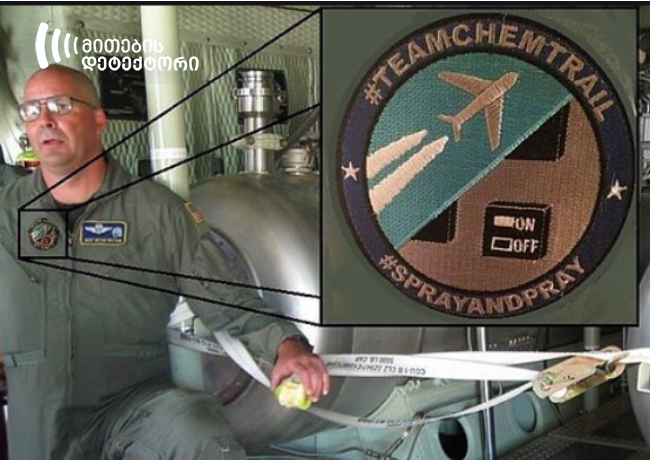 Several photos show the process of loading various planes with large tanks, creating a perception that the planes are loaded with containers that might have some kind of chemicals inside. In fact, the images below show the loading process of airborne firefighting system planes in the North Carolina, US on June 23, 2008. The planes were loaded with tanks of flame-retardant liquid to fight California wildfires.

Another manipulatively disseminated photo is from an online catalog of Russian and Soviet aviation. The photo, showing the loading of a yellow tank into the plane, was taken on October 12, 2005 at Kulbakino Air Base near Nikolaev, Ukraine. It depicts the process of loading a Soviet IL-78 with a fuel tank.

Some photos show large metal tanks in an airplane cabin. These photos, like those discussed above, are military airplanes and are loaded with fuel tanks. One photo is from airliners.net and shows the cabin of a British military plane. The second photo is from the same plane, but from a different angle.