Four Myths by Sputnik and Geworld About the Eastern Partnership 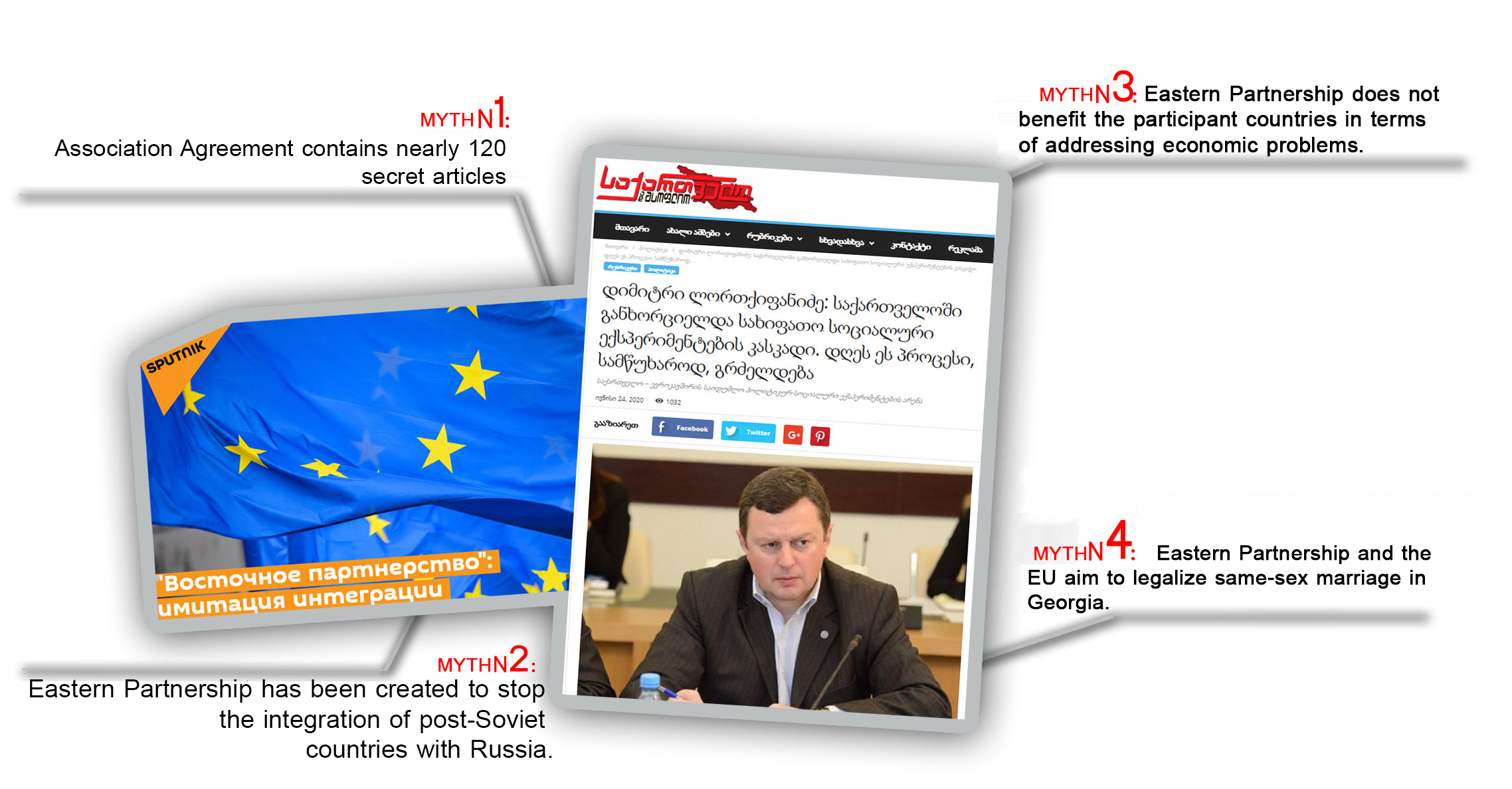 On June 19, 2020, Sputnik Georgia published an article titled: “Eastern Partnership: An Imitation of an Integration”. The author of the article claims that the main goal behind the creation of Eastern Partnership (EaP) was to increase Brussel’s influence and deteriorate Russia’s relations with its neighbor and partner countries. The article also mentions that the European Union makes the EaP member countries dependent on it and – despite the implementation of European projects by the countries – does not allow them to participate in a decision-making process.

On June 24, a similar article, “exposing” the goals and plans of the Eastern Partnership, was published by an online edition Georgia and the World (Geworld). In the article, Jaba Zhvania – a journalist – questions the interest of the Eastern Partnership towards Georgia, Ukraine, and Moldova. The article also reviews the opinion, voiced by Sputnik. For example, Dimitri Lortkipanidze – the Head of Primakov Georgian-Russian Public Centre – states that each step, offered by the West (growing a new political class, developing the third sector) aims to “prevent any possibility of potential rapprochement between Georgia and Russia”. Moreover, the following messages were voiced by Lortkipanidze in his interview:

Myth Detector offers you a review of four myths and real facts, voiced by Sputnik Georgia and Georgia and the World in the aforementioned articles.

This message is a conspiracy and is not based on any evidence. Association Agreement is a public document that any citizen can read.

Myth #2: Eastern Partnership has been created to stop the integration of post-Soviet countries with Russia.

Eastern Partnership has been created with the aim of strengthening ties between the EU and its six eastern partner countries. It has four main priorities in the given countries: stronger economy, stronger governance, stronger connectivity, and stronger society. Participation in the EaP or developing foreign relations with Russia is a sovereign choice of each of these countries. Moreover, the EU has been trying to establish peaceful cooperation with Russia since 1994. Negotiations on a new agreement between the EU and Russia were underway until 2014, but were called off due to the annexation of Crimea by Russia. Nevertheless, the EU still tries to maintain ties with the Russian public and the younger generation, with one of the examples being Erasmus+ program which allows the young people to receive a better education.

Myth #3: Eastern Partnership does not benefit the participant countries in terms of addressing economic problems.

As mentioned above, one of the main goals of the EaP is to strengthen participant countries economically and promote their development. Since 2009, EUR 1.5 billion have been allocated to develop small and medium enterprises in the participant countries. This created 10,000 jobs and resulted in a training of 20,000 people and more than 100,000 loans to the enterprises. Moreover, the EU supported the EaP countries with EUR 140 million to fight COVID-19 and allocated EUR 700 million to facilitate the rectification of economic and social damage, caused by the virus. In addition, it has supported Georgia develop its agriculture and train more than 250,000 farmers in the framework of ENPARD program. Three hundred sixty local development programs have been funded in villages of Georgia in the framework of the EaP.

In January–September 2019, export of the following agricultural goods from Georgia to the EU increased:

Myth #4: Eastern Partnership and the EU aim to legalize same-sex marriage in Georgia.

The given opinion is incorrect, as the same-sex marriage is not a requirement for either the EaP or the EU membership. The EaP does not concern this issue at all. Protection of human rights is, of course, important for the partnership, however, its main focus is stability, economic strengthening, and improving the forms of governance.

The myth about the obligation to legalize the same-sex marriage in exchange for the European integration has been disseminated by the Kremlin for years.

Manipulation with the Turkish Issue

The author of the Sputnik Georgia article also manipulatively cites Turkey as an example and notes that even half a century is not enough to become an EU member. In fact, the EU membership depends not on the time, but on carrying out consecutive, democratic, and progressive reforms. The negotiations on Turkey’s EU membership were stalled in 2016. The given decision was made due to the deteriorating situation of democracy in Turkey. The European Parliament criticized Turkey with regards to the human rights protection, media freedom, corruption, and the rule of law and called off of the membership negotiations. The relationship became even more tense after a referendum that took place on April 16, 2017 in Turkey which has been labelled as not meeting European norms. No agreement was reached between the EU and Turkey at a 2018 summit either. A more detailed timeline of the EU–Turkey relations is available via this link. Generalization of the Turkish case is manipulative, sows nihilism towards the EU membership and spreads the opinion that the EU does not intend to accept new members despite the promises it makes.