For Which Spheres Is the US Funding Used? 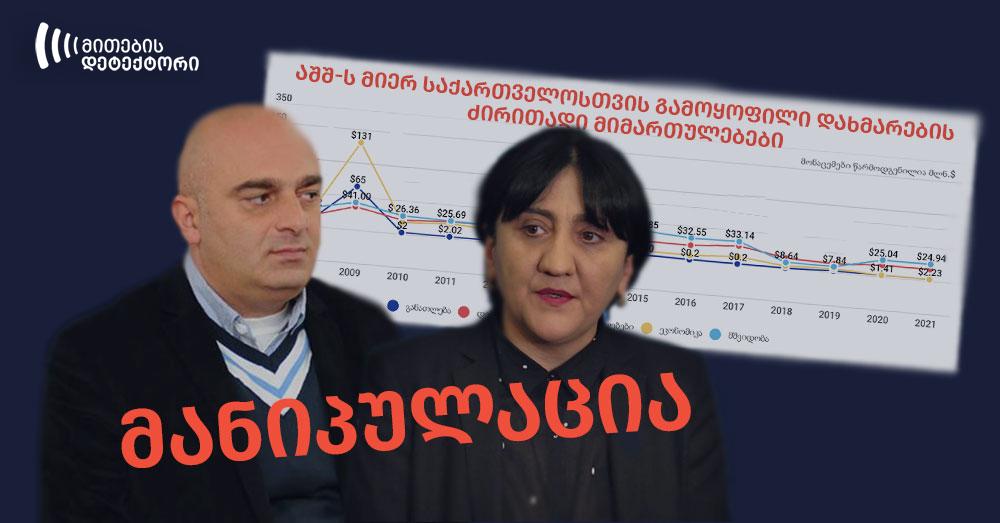 On May 29, the Leader of Georgian March, Sandro Bregadze, stated on air at TV Obiektivi that the major part of funding, sent to Georgia, is used to finance anti-Georgian and anti-national NGOs, whose main fight vector is aimed at the Georgian Orthodox Church. Bregadze also claims that it would be nice, if these funds were allocated for education, humanitarian aid, and social issues, but it is only the “evil anti-national NGOs” that use up the grants. Nino Ratishvili, the TV Obiektivi host, added that it had already been announced that the funds, allocated to Georgia as aid, will be used for media and plurality of political forces.

Bregadze’s comment followed the signing of a USD 67 million grant agreement between Georgia and the United States Agency for International Development (USAID) on May 21.

On May 19, two days before the signing of the agreement, the host at TV Obiektivi’s program Studio N8 and one of the leaders of the Alliance of Patriots of Georgia, Irma Inashvili, spoke about the funding allocated by the West to Georgia and claimed that the Western aid is actually allocated to fight the Catholicos-Patriarch of All Georgia, not to help Georgian people.

The claims by the hosts and the respondents of TV Obiektivi about the US funding being allocated to fight the Church and not being used for the well-being of Georgian people are manipulative and interpret facts incorrectly. In fact, the aid allocated by the Government of the United States to Georgia includes various sectors, such as agriculture, education, economy, democracy and human rights. The aid to be allocated by the US in the coming years includes the same and even more sectors.

The table includes the amount of funding allocated by the US to Georgia for education, peace, economy, democracy and human rights between 2008-2021.

The website of the USAID includes the list of the projects, implemented in Georgia with the support of the organization. The table includes information on the aid allocated to agricultural, entrepreneurial, and education sectors in the recent years.

The information about the entrepreneurs, farmers, and other participants, funded within the aforementioned projects, is periodically published on the Facebook page of the USAID too. For instance, it includes information about the projects, such as Digital Day in the Life of Georgia, which aims to promote tourism, Potato Program, hazelnut production, berry production, jam production, AgroStop (promotion of agricultural tourism), production of dried bay leaves, funding of a flower greenhouse, production of plastic-alternative packaging etc.

The posts, given below, include the stories of the farmers and entrepreneurs that managed to improve their business and production with the help of the USAID.

The posts, given below, include the stories of the farmers and entrepreneurs that managed to improve their business and production with the help of the USAID.

Therefore, the statement by Sandro Bregadze that the Western grants only finance “evil anti-national NGOs” is not true. Against the background of the allocation of USD 330 million in the next five years by the United States to Georgia, it is manipulative to talk about this funding being channeled to the NGO sector and, therefore, to the “fight against the Church”. Such claims aim to sow anti-Western and anti-American sentiments.

This is not the first case, when TV Obiektivi, Alliance of Patriots of Georgia, or other pro-Russian actors spread disinformation about the funding allocated by the US to Georgia. For instance, prior disinformation included claims about the US not investing in Georgia and not funding programs at all. Disinformation about NGOs has also been disseminated – it claimed that they did not react to human rights abuses during the rule of the United National Movement. You can read more about these topics in the following articles by Myth Detector: