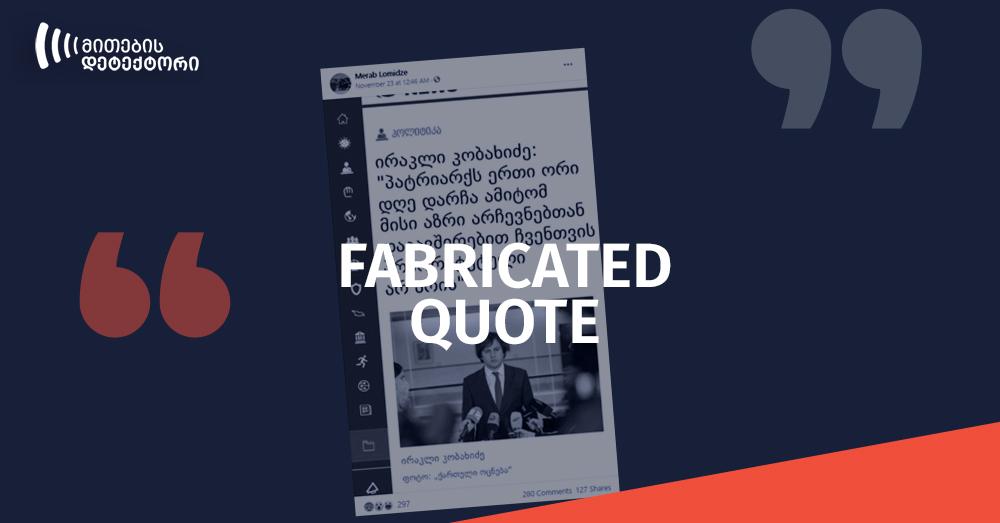 On November 23, Facebook user Merab Lomidze published a screenshot from TV Imedi’s webpage in the group “ლიდერები მიხეილ სააკაშვილთან ალიანსში / Leaders with Mikheil Saakashvili in”. Photo quotes one of the leaders of Georgian Dream Irakli Kobakhidze: “Patriarch has 1-2 days left and therefore, his opinion about election isn’t a priority for us”. An identical screenshot was uploaded on the Facebook page Europe. 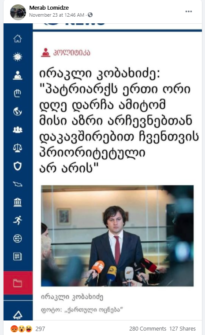 The mentioned quote is fake.  Irakli Kobakhidze’s quote with similar content cannot be found on TV Imedi’s webpage nor can it be found in other sources. Post is shared by the pro-National Movement accounts.

Quote with similar content cannot be found on TV Imedi’s webpage. The last news with the identical photo was published on November 18 on the webpage and it’s about international partners assessing the legitimacy of elections.

Patriarch and patriarchate’s position on Georgia’s parliamentary election results became more frequent recently.  They haven’t made the official statement and comment so far. On Netgazeti’s question, why hasn’t Patriarchate responded to results of the second tour of elections, Archpriest Andria Jaghmaidze answered the following: „Official results haven’t been published yet”.  Head of the Public Relations Office of Patriarchate explains that Patriarchate is still waiting and says that it’s not appropriate to make statements when there are political tensions.

A fake screenshot was published by Facebook page Europe, where it was shared by 5 other users.

The group “ლიდერები მიხეილ სააკაშვილთან ალიანსში / Leaders with Mikheil Saakashvili in”, where the fake screenshot was initially uploaded, has about 9 300 members. User Merab Lomidze is one of the 7 administrators. Group was created on February 9, 2020, with a different name “Supporters of Mikheil Saakashvili’s New Headquarter”. It has its current name since May 12, 2020. Page’s additional information and the name clearly indicate that it was created in support of Mikheil Saakashvili. Besides Georgia, Ukraine is also indicated in the location of the group. Merab Lomidze cannot be identified via his personal account.

As for the page “Europe”, it was created in 2012 and is managed by two administrators from Belgium, whereas the location of one is hidden. In addition to politics, the page also shares social and recreational content. Albeit, various types of discrediting posts including the ones targeting Georgian President Salome Zurabishvili and Bidzina Ivanishvili are disseminated on the page as well.