Does the Former National Security Advisor of the United States Wish to Freeze the Conflicts in the Caucasus? 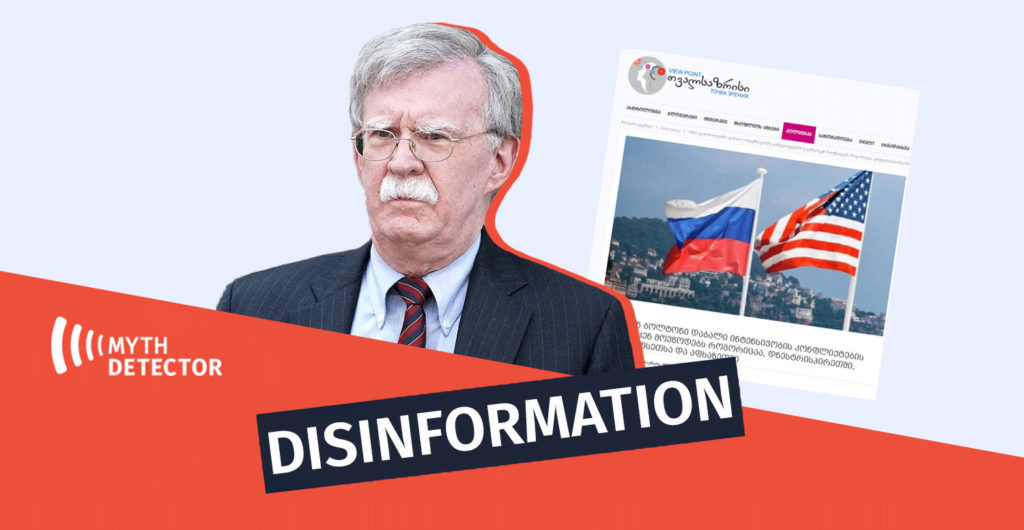 On November 28th, the website tvalsazrisi.ge published an article entitled “John Bolton calls for the U.S. for freezing low-intensity conflicts such as in Transnistria, South Ossetia and Abkhazia.” The author of the article, Irakli Jankarashvili, notes that in the opinion of the U.S. National Security Advisor in 2018-2019, the U.S. should respond to Russia’s macro-strategic policy in the post-Soviet space by freezing low-intensity conflicts in these territories. 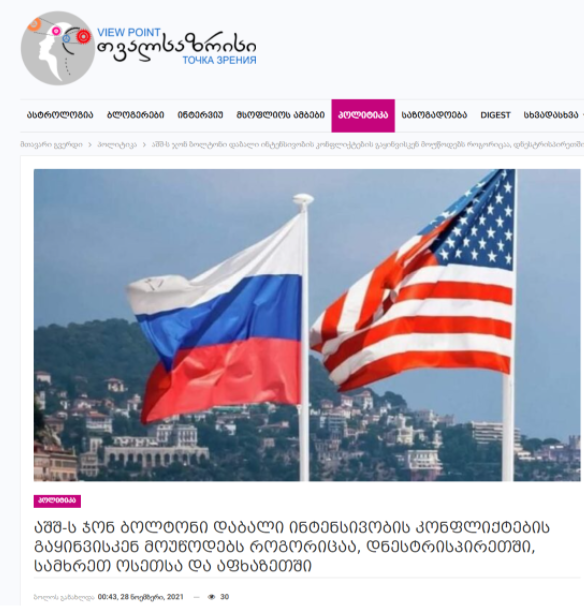 The information found in the article of tvalsazirisi.ge that John Bolton called for freezing low-intensity conflicts such as in Transnistria, South Ossetia and Abkhazia is false. The article in tvalsazirisi.ge contains a quote from Bolton, which by itself contradicts the title of the article and the content written in the first paragraph. According to Bolton, more attention from the international community should be paid to both the Transnistrian and Georgian occupied territories.

On November 27th, John Bolton, the former U.S. National Security Adviser, tweeted an analytical article he authored at 19fortyfive.com. The article discusses Russia’s plans and the response of NATO.

According to Bolton, Putin has a macro-strategic plan in the neighbourhood of Russia and checks the readiness of the whole “gray zone” between NATO’s eastern border and Russia’s western border, by which he means Ukraine and Belarus, as well as Moldova and the Republics of the Caucasus. In the article, Bolton refers to the “frozen conflict” in Transnistria, the Russian-occupied regions of Georgia, and Moscow’s pro-Azerbaijani intervention in the conflict with Armenia and considers them part of the Kremlin’s hegemonic politics in the “gray zone.”

Bolton does not call on the United States and NATO to freeze the conflicts in Transnistria, so-called South Ossetia and Abkhazia, but, on the contrary, to shift more attention towards these conflicts. According to Bolton, NATO should solve the so-called “Frozen conflicts” and seek to achieve the disappearance of the Transnistrian republic, an artificially politically dependent Russian entity, as the issue of the Moldovian unification will divert Putin’s attention from Ukraine. Another way to divert Russia’s attention, according to Bolton, is to concentrate the attention of the international society around the issue of the occupied territories of Georgia. According to the former U.S. National Security Adviser, the failure of the West to avoid the Russian attack on Georgia in 2008 led to Russia’s occupation of Crimea and Donbas.

The article of tvalsazrisi.ge includes the following quote of Bolton: “One of the priorities of U.S. policy should be the destruction of Transnistria, an artificial entity that depends entirely on Russia. Another distraction may be the increased international attention to Abkhazia and South Ossetia, the “occupied regions” of Georgia.”

Although the article includes the quote from Bolton, the information given in the title and the first paragraph is false since Bolton never called for freezing the conflicts.

Noteworthy, at the end of the article, the author, Irakli Jankarashvili, manipulatively notes that NATO Secretary-General Jens Stoltenberg refused to provide military assistance to Ukraine in the event of a Russian attack. While It is true that Stoltenberg noted that since Ukraine is not a member of NATO, Article 5 of the treaty on collective defense would not apply to it, however, NATO would still offer Ukraine both political and military assistance. The article by tvalsazrisi.ge tries to create a context as if the West does not care about the Eastern European states and does not want to react to their conflicts.